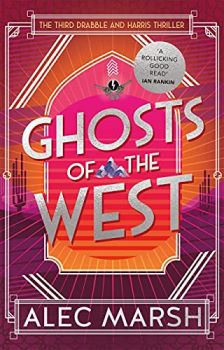 When daring journalist Sir Percival Harris gets wind of a curious crime in a sleepy English town, he ropes in his old friend Professor Ernest Drabble to help him investigate.

The crime is a grave robbery, and as Drabble and Harris pry deeper, events take a mysterious turn when a theft at the British Museum is soon followed by a murder.

The friends are soon involved in a tumultuous quest that takes them from the genteel streets of London to the wide plains of the United States. What exactly is at stake is not altogether clear – but if they don’t act soon, the outcome could be a bloody conflict, one that will cross borders, continents, and oceans…

Meanwhile, can Drabble and Harris’s friendship – which has endured near-death experiences on several continents, not to mention a boarding school duel – survive a crisis in the shape of the beautiful and enigmatic Dr Charlotte Moore?

Alec Marsh recently spent some time with The Big Thrill discussing his latest thriller, GHOSTS OF THE WEST:

First and foremost, the primary purpose of the book is to entertain – I want readers to have a good time with Drabble and Harris – but I also hope that the historical context of the book comes to life for readers and that through that it asks important questions of them and helps readers to question what their understanding of the past may be and then to reassess it. Within GHOSTS OF THE WEST this relates strongly to the treatment of Native Americans in the US. 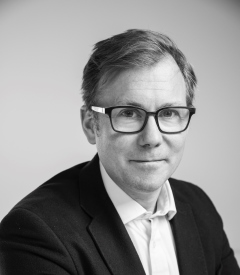 I would like to think that GHOSTS OF THE WEST brings the past alive to audiences of today with a freshness and immediacy that in itself is an achievement. I’d also like to think it challenges complacency many of us feel about the past and calls for a reassessment of aspects of it. Finally, I’d like it to bring to people’s attention how recent that past is, especially in the context of the Plains Indians and their conflict with the US.

I learned a huge amount about US history and the history of the indigenous peoples of the USA while researching this book. Without going into the detail, I was enthralled and awed and appalled by aspects of the huge narrative of the opening up of the West, which obviously looms large within the American cultural and historical story. As a Brit, I was aware that to enter into this topic at my peril, but I hope I have created something that is respectful to the different communities involved and ultimately fair, and also serves the reader well as a thriller, too.

The book is a third person narrative told from the perspectives of the two protagonists – Drabble and Harris. At one stage in the book, I introduce a third perspective. That for me was a big change!

Golly. I hope that the richness of the characters continues to come to life for readers and grow, really.

It is difficult to tell but consciously, I would say that among the primary influences are almost certainly, Evelyn Waugh, Graham Greene, Kingsley Amis, Anthony Powell, and probably John Buchan with doses of Erskine Childers and Geoffrey Household thrown in. Waugh is the storyteller of the 1930s, and a genius. Greene, likewise, has an enormous range and does action and suspense in a way that you won’t find with Amis or Powell, whom I’m devoted to for their handling of dialogue and conjuring the era of the mid-century; there are certainly strands of Buchan’s Hannay in my Ernest Drabble, but… not entirely. I suppose in the creation of a double act- Drabble and Harris– I consciously had Holmes and Watson in mind and a sense of the appreciation that that can bring.

I think I’ve already alluded to this, but the book certainly asks questions of the past: could the treatment of Native Americans have been different, at various points in the 19th and 20th centuries, and then, might the US have followed a different path, politically, at the end of the 1930s? I think the answer to both of those is ‘yes’ – they could have been different and that’s where the gap opens up in fiction, sometimes.

Alec Marsh is the author of Rule Britannia, a light-hearted historical thriller set against the backdrop of the Abdication Crisis in 1936 – described by Rebus-creator Ian Rankin as ‘a rollicking good read’ and by Number One Ladies’ Detective Agency author Alexander McCall Smith as ‘an immensely readable treat’.

Rule Britannia is the first in a series featuring protagonists Drabble and Harris and was published in October 2019 by Headline Accent. The second novel in the Drabble and Harris series – Enemy of the Raj – is set in British India in 1937 and was released in September 2020.

The third Drabble and Harris book, GHOSTS OF THE WEST, will be published in original paperback and ebook on 9 September 2021 in Britain and on 25 January 2022 in the USA.

Alec was born in Essex in 1975 and studied history at Newcastle University before embarking on a career in journalism. Over the last 20 years he has written for most of the national newspapers as well as for the New Statesman, the Spectator and Country Life. He is currently editor-at-large of Spear’s magazine, and lives in Essex with his wife and family. He is also working on the fourth novel in the Drabble and Harris series, which will be set in Turkey.