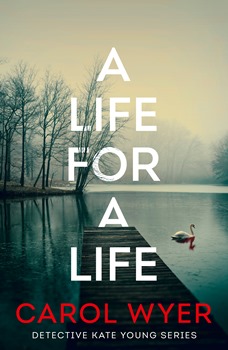 How can you catch a serial killer when even they don’t know who they’re going to murder next?

Kate Young’s quest to bring down Superintendent John Dickson is put on hold when she is assigned an investigation into a young man’s death. His body was found by the side of the road with two holes in his forehead not caused by a bullet.

What starts out as a premise of accidental murder turns sharply when another body, this time a mother of two, is found in similar circumstances, and then a third, a middle-aged man. The team is baffled. As the body count steadily mounts, the team realises that this time, they have no clues or any way of stopping a killer who appears to choose their victims at random.

Carol Wyer recently spent some time with The Big Thrill discussing her latest thriller, A LIFE FOR A LIFE:

Research for the book led me to a psychologist who has worked with some well-known UK convicted serial killers. Following conversations with her, I discovered most reasons for their behaviour were linked to traumatic events or their upbringing. This in turn allowed me to flesh out the killer in this book and help readers get into their head. 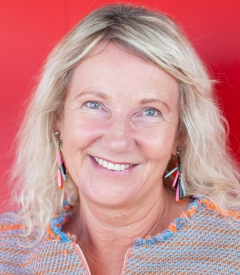 Like many of my crime fiction novels, I aim to present the dark side of human psychology to my readers. Not in an attempt to have them sympathise with the perpetrator of crimes, but to comprehend how complex the human mind can be. Likewise, the protagonist, DI Kate Young, has demons which threaten to unravel her and challenge her morality.

Carol Wyer is a USA Today bestselling author and winner of the People’s Book Prize Award. Her crime novels have sold over one million copies and been translated into nine languages.

A move from humour to the ‘dark side’ in 2017 saw the introduction of popular DI Robyn Carter in Little Girl Lost and proved that Carol had found her true niche.

In 2021, An Eye for an Eye, the first in the DI Kate Young series, was chosen as a Kindle First Reads. It became the #1 bestselling book on Amazon UK and Australia. The third, A LIFE FOR A LIFE, is due out March 15th, 2022, but is available to preorder.

Carol has had articles published in national magazines Woman’s Weekly, featured in Take A Break, Choice, Yours, and Woman’s Own magazines and written for the Huffington Post. She’s also been interviewed on numerous radio shows and on Sky and BBC Breakfast television.

She currently lives on a windy hill in rural Staffordshire with her husband, Mr. Grumpy . . . who is very, very grumpy.

When not plotting devious murders, she can be found performing her comedy routine, Smile While You Still Have Teeth.