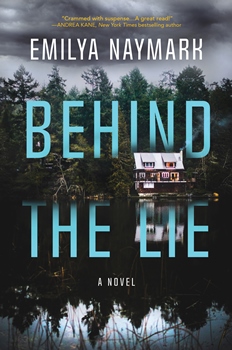 NYPD detective turned small town PI Laney Bird is in a fight to save lives—including her own—after a neighborhood block party turns deadly.

All Laney wants is a peaceful life for herself and her son. But things rarely remain calm in Laney’s life—and when her neighborhood summer block party explodes in shocking violence and ends with her friend’s disappearance, she’ll need all her skills as a PI to solve a mystery that reaches far beyond her small town.

Emilya Naymark recently spent some time with The Big Thrill discussing her latest thriller, BEHIND THE LIE:

More than anything, I love to entertain. I hope that my readers will enjoy going on a wild ride with my characters, and that it will give them an opportunity to relax and unplug from everyday concerns. 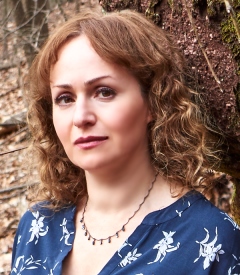 Part of my story concerns our society’s obsession with youth and longevity—at any cost. Doing research for this took me to fascinating places (on the Internet, of course).

For example, there is a CEO of a pharmaceutical company who injected herself with experimental compounds to prove their efficacy. And I mean experimental. It was like reading the plot of a 1950s SciFi movie.

There are entire communities who starve themselves on a daily basis because there is some small evidence showing that doing this will extend a lifespan well past one hundred years.

Reading about this race for longevity practically birthed my characters for me.

I love the idea that the world is a complicated place and not everything can be explained away by science. Although there are elements in my novel that might be construed as supernatural, the book is very firmly grounded in reality.

However, not all my characters are that well-grounded.

Tana French, because she is the best at getting inside a character and describing an emotion without ever resorting to cliché. Her writing is razor sharp and original at both macro and micro levels.

Susanna Clarke because Jonathan Strange and Mr. Norrell is so gorgeous in both prose and imagination.

Jean Hanff Korelitz because she truly understands how to write a deeply relatable character and then squeeze that person until something breaks. And she does it with a wicked sense of humor.

John Boyne, because of flawless prose, precisely observed situations and characters, and the ability to set an expansive range of mood—from stark to lovely in a few paragraphs.

Last but not least: Liane Moriarty and Lisa Jewel. I read anything either of them writes because they are both absolutely genius at creating extremely relatable characters and then throwing those characters off a (sometimes metaphorical) cliff.

Emilya Naymark was born in a country that no longer exists, escaped with her parents, lived in Italy for a bit, and ended up in New York, which promptly became a love and a muse.

She is the author of the novels Hide in Place and the upcoming BEHIND THE LIE, out February 8, 2022.

Her short stories appear in A Stranger Comes to Town, edited by Michael Koryta, Secrets in the Water, After Midnight: Tales from the Graveyard Shift, River River Journal, Snowbound: Best New England Crime Stories 2017, and 1+30: THE BEST OF MYSTORY.

When not writing, Emilya works as a visual artist and reads massive quantities of psychological thrillers, suspense, and crime fiction. She lives in the Hudson Valley with her family.