From the Barbershop to the Circus 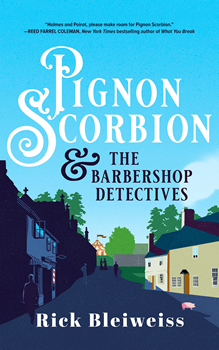 In Rick Bleiwess’s debut, PIGNON SCORBIAN AND THE BARBERSHOP DETECTIVES, the impossibly named and snappily dressed Pignon Scorbion has just become Haxford’s newest chief police detective in the summer of 1910. After demonstrating his sharp observational skills to his friends in the local barbershop, they join him in his investigation of the murder of a circus performer.

His “tonsorial sleuths” (as he calls them) bring their own special flavors to the book, creating rich depth to a complex set of mysteries that cover five decades and three continents. And that’s before the gorgeous and brilliant Thelma Smith steps through the barbershop doors, bringing hints of a femme fatale in her wake.

This book has everything an Agatha Christie fan can want—a quirky Poirot-esque detective, a bucolic English village right before World War I, and a villain worthy of a master detective.

Bleiweiss sat down with The Big Thrill to share the creativity that went into creating this dynamic detective and his band of merry helpers, and to give us a hint of what’s next for Pignon.

Your hero is a contemporary of Agatha Christie’s Poirot with some decidedly Holmesian traits. How do they compare to Pignon? 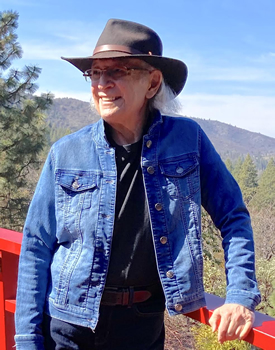 Bleiweiss on the Japanese bridge at his home

Scorbion deductively and observationally solves cases much like Sherlock Holmes and Hercule Poirot and employs brainpower over force as they do. While Holmes was native to England, and Poirot was Belgian before moving to the UK, Scorbion was born in Paris prior to his father (an Egyptian entrepreneur/seafarer who met his mother in Haiti) and mother eventually settling in Britain where Pignon was raised and became an English citizen.

Like Holmes and Poirot, Scorbion is a complex character but in different ways. He is an immaculate dresser who wears custom-made colorful suits and unique black and white shoes, yet he never wears hats, all of which was usual for that time period. He is clean-shaven, always has buffed nails, and has his hair cut regularly. He is a brandy aficionado, an art connoisseur, a lover of live theater (especially musical theater) and plays chess and rugby. He is fastidious and detail oriented, is an unconventional non-conformist who holds opinions and attitudes quite advanced for the era (yet totally fitting to the time period), and is a figure who has foibles, yet is himself aware of them. He is confident, fair, and considerate, and while he believes deeply in upholding the law, he is sympathetic to extenuating circumstances. He appreciates beauty and intelligence, has a thirst for knowledge, and reads many books.

This book is an historical mystery. What kind of research did you have to do to create the appropriate atmosphere? 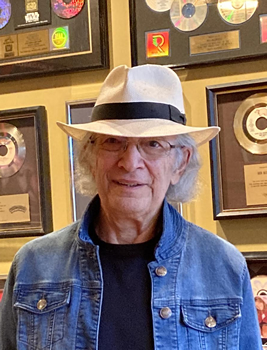 Bleiweiss in front of some of his gold and platinum record plaques. During his long career in the music industry, Bleiweiss produced more than 50 records and worked with such rock and pop legends as U2, KISS, Melissa Etheridge, Whitney Houston, and more.

I conducted a massive amount of research, because I knew that to make the story believable, authentic, and accurate, it was the “small things” I had to get right. Especially since I based the story in a countryside English town in 1910, everything in the story had to be appropriate to that place and time. That included the language that was used, people’s names, the setting, what clothes were worn, and events that were taking place in both England and the world.

I had to research what lighting was used in stores and homes, what jobs people had, the state of communication and transportation, what books, songs, and paintings were popular, and so many more things that I had not anticipated having to know—but absolutely did have to incorporate to have the story feel realistic. In addition to the research, I asked a number of people to do sensitivity and accuracy reads once the book was written, and they contributed to its correctness.

The murder takes place in a circus community. How fun was it to write about the carnival culture?

It was really a lot of fun. I had to do a ton of research into what the circuses of the time were like and what terms were used in that era in the carnival environment. I learned a lot about circus life and customs and incorporated that into what is basically a combination of a love story and a murder mystery that takes place in that particular section of the book.

I have always enjoyed circuses and even attended a travelling carnival at a county fair in a small town in Spain a number of years ago, not to mention the ones I went to as a child in the United States. I’ve always been enthralled by the colors, sights, smells, and sounds of circuses, and their people, trappings, and animals, and tried to convey my love of that in the story. It also gave me the opportunity to detail the workings of a circus and the life of the people who work in one—at least in that era. 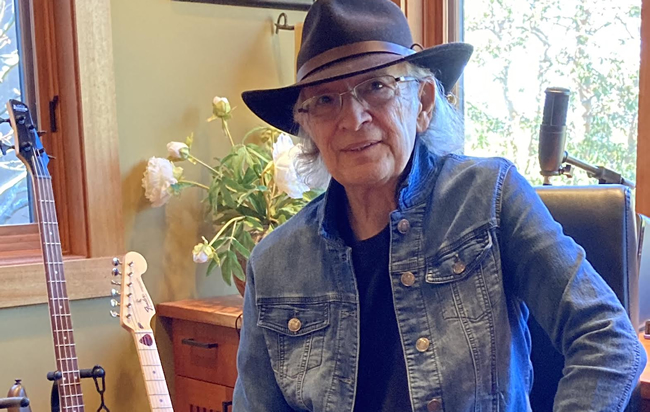 Bleiweiss in his home recording studio with some of his guitars

Which character was your favorite to write?

I had two characters who were my favorites to write. The first was Scorbion himself. He just popped into my head one day, and I instantly knew he would be someone I would enjoy writing about and making come to life for a reader. As I detailed above, he is complex, and that allowed me to take him in many directions. Additionally, because it is his job to solve the crimes, I had to utilize all my own brainpower to enable him to see things that others didn’t and realize solutions that others couldn’t see.

The second was Thelma Smith. My whole life I have been attracted to strong, capable, intelligent, and beautiful women, and writing her gave me an opportunity to put those traits into a character. It also gave me a chance to utilize my feminine side and infuse that into her. Making her unconventional, knowledgeable beyond the norm, intuitive, very attractive, and a crusader for women’s rights gave me a wide berth to showcase her and her abilities. She also proved to be a rather valuable asset to Scorbion, not to mention a love interest. In some ways I liken her to Susan in the Spenser for Hire books by Robert B. Parker.

Will we meet Pignon Scorbion again? 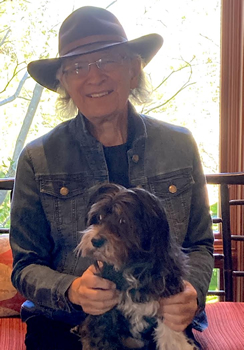 Bleiweiss with his dog Gracie, an 11-year-old Havanese

Absolutely. I have just completed writing Book 2, which should be published a year to a year and a half from now. It continues the adventures of the entire core crew from this first book but adds new characters and has a great new set of mysteries for them all to solve, including a hot air balloonist who is shot while in the balloon’s gondola, a blacksmith who is killed after birthing twin calves, a moneylender who dies in the barbershop, and some other twists and turns.

In the next book, the lives, backgrounds and stories of all the key characters are even more fully expanded. and Scorbion’s conflict with newspaper owner/publisher Faustin Hardcastle and his relationship with Thelma both intensify. Plus, when Scorbion’s ex-wife, Katherine, returns to try to reunite with him, it complicates his relationship with Thelma.