High Society Homicide in the Hamptons 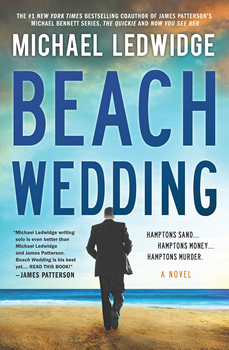 Bestselling author Michael Ledwidge takes readers on a trip to a high society wedding in The Hamptons in his newest thriller, BEACH WEDDING. But lurking under the soft sand and salty surf is a decades-old crime that quickly takes center stage.

Tom Rourke is now a wealthy financial wizard on Wall Street and wants to host the wedding of a lifetime at a mansion in Southampton, on ritzy Meadow Lane. The Rourkes were from “the poor man’s Hamptons—Hampton Bays across the Shinnecock Inlet.” They were “townies” from “the-split-level-born class.” Growing up on the outside of high-society looking in, Tom wants everyone to know he’s made it.

But there’s a reason Tom picked a mansion on Meadow Lane.

Noah Sutton’s estate is on Meadow Lane, and his murder had ruined the Rourke family 20 years before. The Suttons were often called “the Kennedys of the tristate area.” Tom and his brother, Terry know all too well how their father, Sean—the lead prosecutor in the murder trial—was ostracized after his efforts ended in a mistrial.

Someone murdered Noah Sutton on July 5, 1999, after his big July 4th party, where Terry was tending bar. Now Terry is the lead sergeant of the street crime squad in Philly, and he’s discovered clues about Noah’s cold murder case that he’s compelled to pursue. As he gets closer to uncovering the killer’s secrets, his investigation catapults his family into danger.

Terry Rourke’s character uses witty and sardonic humor as he traverses a world he left behind 20 years before. And just like Terry, Ledwidge’s wry and irreverent banter entertains his audience.

Here, he chats with The Big Thrill about his motivation, getting to know the New York elite, the difference between justice and revenge, and his advice for other writers.

What was the inspiration for the story in BEACH WEDDING? 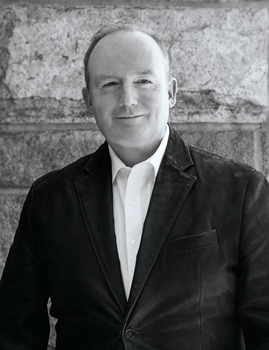 BEACH WEDDING was one of those novels that started out with a 99.9 percent blank page, both in front of me and inside my head. The one-tenth-of-one percent that started it was its title, BEACH WEDDING. I came up with this title by observing that my good buddy and writing partner, James Patterson, had several great fun-in-the-sun summer thrillers with Beach in the title that people seemed to enjoy. He also had one with Wedding in the title. So I said, let’s put them together. When I passed this title by my dental hygienist, Kelly (who is a big fan of mine and of James Patterson), she said, “Who doesn’t want to go to a beach wedding?” I knew I was on to something!

Title down, as a crime/thriller writer, I now needed a crime. Around this time, my wife badly broke her leg. Not able to climb the stairs for three months, her injury relegated us to the couch where we watched just about every single episode of every true crime television series ever filmed. As we devoured season after season of Dateline, 48 Hours, Unsolved Mysteries, City Confidential, and my all-time favorite, the Court TV gem, Dominick Dunne’s Power Privilege and Justice, I had my notebook in my lap to chronicle the crimes of the centuries, as well as their trials. One thing that stood out was how many of these high-society murders took place on Long Island.

Can you expand on the attitudes of the “haves” and the “have-nots” in the Hamptons?

Choosing the Hamptons for the beach setting was a no-brainer for me as I know the place. Two summers in a row in college, I rented a bungalow with my insane and hilarious working class Bronx Irish friends in what was dubbed “the poor man’s Hamptons,” the Hampton Bays. 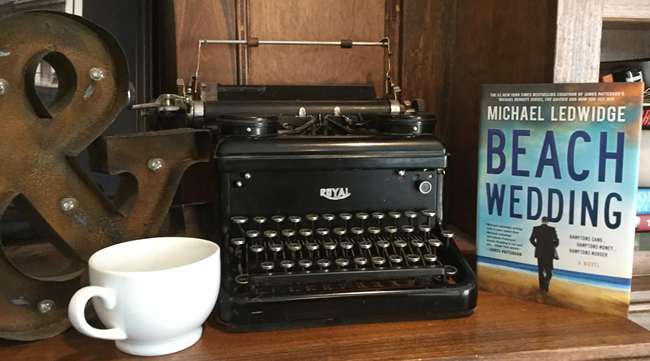 What gave me some authority in the manners and ways of the other Hamptons—the mega billionaire Hamptons—is that throughout college and afterwards, I worked as a doorman on Central Park West and Park Avenue. Both luxury apartment buildings were tiny, but there was always a massive amount of drama—charity balls, trophy wives, Wall Street hot shots in Armani tuxedos, Bentleys, private jets, divorces, adoptions, drug addictions, 100-year-old dying robber barons, people cheating on each other, presidential fundraisers with the secret service, and even an FBI raid.

I’ve humped bags and gotten taxis for foreign monarchs, CEOs, world famous jewelers, and VIP call girls. It paid terrible money, but for a young aspiring writer, it was a good gig—it was like working inside Tom Wolfe’s The Bonfire of the Vanities. Sorting their mail and talking to their maids, I got to know these privileged people almost better than they knew themselves.

Where is the line between long-deserved justice and revenge?

At the courthouse! If you think about it, law (and civilization) was invented to put an end to the endless bloody eye-for-an-eye revenge cycle. Justice needs a third neutral party AKA a judge and jury (another James Patterson title!) to step in and to stop all the back-and-forth bloodshed by objectively and unemotionally fitting punishments to crimes. No wonder Hamlet is so bummed when he’s tasked to personally avenge his pop’s killer! Today, all he would have to do is dial 911 or call the DA.

The takeaway I want for my readers is always the same: I hope you enjoyed the ride and please come again!

My next novel is the third book of my Michael Gannon thriller series. Michael Gannon is an American combat vet, ex-Special Forces operator who has run afoul of the “Deep State.” Part The Fugitive and part The Equalizer, Gannon’s particular skill-set is put to work as he tries to right what is wrong while keeping his head down and staying alive. If you liked Diehard, you will love the series as John McClain is Gannon’s (and my own) spirit animal. In his review of the first book in the series, Stop at Nothing, Steve Forbes in Forbes magazine called me “a master of my craft.” That is a pull quote I will not forget—now my headstone has a subtitle.

If possible, write first thing in the morning and make the manuscript the first thing you place your eyeballs on. Hemingway said to read the whole thing over again every morning, which I used to do but now only for 100 pages at a time. (When I get to 101, I will start there every morning until I get to page 200, and so on.) The power of a fresh and focused human mind is more immense than most people realize. As you place your work before it over and over again, your personality will inhabit the story and give it life.

Getting married young is the real secret of my writing success. I was a terrible student, too busy daydreaming to ever finish anything. But once my beautiful wife was crazy enough to toss her bags aboard the SS Mike Ledwidge, that changed. As it was unfair to make a beautiful woman live on a doorman’s salary, I needed to up my game and quick.

Five years later, I sold my first crime novel to Morgan Entrekin at Atlantic Monthly Press. That same summer, I flew to LA for the first time to do lunch in the Hollywood Hills with the legendary science fiction legend, Harlan Ellison. I was 26.