The Darker Side of Happy 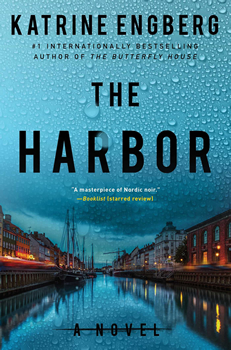 Scandinavia is known for its wild, rugged beauty, the steely resolve and deep compassion of its people, and its reputation as one of the happiest places on earth. But there’s a dark side to this arctic Shangri-la. Bleak landscapes and long, dark winters have given rise to a gritty crime genre commonly known as Nordic Noir.

Danish author Katrine Engberg is among the masters of the genre, which is characterized by moral complexity, multi-layered characters, and slow-burn pacing, all inextricably woven into a stunning yet unforgiving setting. A former dancer and choreographer with a background in television and theater, Engberg brings a sense of kinesthetic wonder to her series, which has been praised for its “artful originality and beautiful prose.”

“Writing is music,” she says. “I know this is such a cliché, but there it is. A sentence is all about rhythm and pulse; as a writer you have to be able to feel the words and not just approach them intellectually. Dancing and choreographing are closer to writing than what most people might think. Besides, all art is storytelling. I used to tell stories with actors’ bodies on stage; now I do it with words on a page. Different languages, but the creative process is identical.” 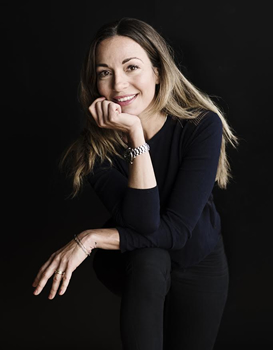 Asked how she became a crime fiction author, Engberg says, “Every writer begins as a reader. I grew up in a family of passionate readers and storytellers; we would often sit around the dinner table and either read or tell each other long, winding stories. Everyone had different favorite authors and genres, but one we shared—crime fiction. My mother’s favorite was Dorothy L. Sayers, my father’s was Maigret, my sister’s Patricia Cornwell, and I loved Ruth Rendell.”

Enberg’s passion for the written word never left her. “Even if I, for many years, delved into a very different passion of mine—dancing—and made that my profession, I never stopped reading and writing. With age, my courage grew, and I started showing my texts to the people close to me. And with a bit of encouragement, I started concocting stories about a fictional woman—Esther de Laurenti—and they quickly turned into crime plots.”

She says this wasn’t a deliberate decision. “Crime fiction just turned out to be my thing—the frame in which my ideas flow and thrive. In Scandinavia, we have a strong tradition, going back to the 1960s, of writing crime novels with real, relatable characters and societal, even political, themes. In the rest of the world, this style is often referred to as Nordic Noir. I humbly attempt to continue and develop this tradition further.” 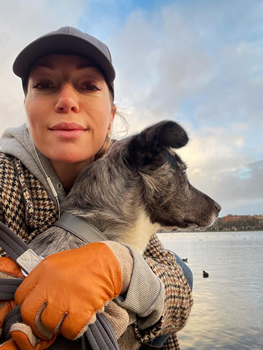 Engberg with her dog, Ozzy (named after the Prince of Darkness, of course)

Engberg believes writing is, by far, the best job in the world. “I 100 percent decide what I want to work on and when; there is no boss and few demands (other than the ever-looming deadline, of course).” Once she’s eaten breakfast with her family, walked the dog, and taken her son to school, she sits down to the computer in her home office and starts working. “Mostly, I divide my time equally between researching (online and on field trips), plotting on my story board (via my self-invented system of different colored post-its), and actual writing. I tend to do very little editing while writing the first draft as I want to protect the inspiration and the confidence necessary for making up stuff. But once the first draft is done, I rewrite over and over again, sometimes up to ten times before I am happy with the text.”

Her latest novel, THE HARBOR, follows detectives Jeppe Kørner and Anette Werner as they race to find a missing teenager and solve a series of seemingly related murders. The book is by turns dark, charming, poignant, and terrifying. Asked what she hopes her readers will take away from it, Enberg says, “THE HARBOR is a crime novel, and thus I hope it will entertain, thrill, and surprise. But it is also a novel about growing up, about art, existential crisis, and exploitation. I hope its readers will be led to reflect on these themes, even feeling something, be it melancholy, anger, or frustration. Good crime novels are also good literature, and all good literature evokes reactions from its readers.”

For Engberg, the characters come first. “I take a long time getting to know the people I write about,” she says, “even those characters who only appear in one scene. They all have to feel authentic and interesting to me. When they start breathing on the pages, the story evolves from them. That’s the only way a wildly unlikely crime story has a chance of feeling plausible to the readers. If I tried to make the plot first and then the characters, it would feel forced.”

But like all Nordic Noir novels, the setting also plays a vital role. “Setting is a major source of inspiration to me,” Engberg says. “That is, I don’t think up a story and then choose a setting; it is the other way around. Places inspire me profoundly, be it a derelict building, a power plant with a ski slope on its roof, or a deserted sea fortress in the harbor of Copenhagen. I visit these places, and ideas of what could happen there instantly pop into my head.” 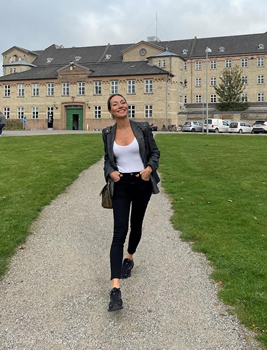 Engberg at the Danish Crime Fair, which is held in a former prison

A voracious reader, Engberg says there are several books that have changed her life, but the one she keeps going back to is Oscar Wilde’s masterpiece The Picture of Dorian Gray. “Easily one of the best books ever written,” she says. “It’s so funny, sharp, and poetic—and based on ever-important themes of existentialism, morality, and the importance of art.”

Engberg is currently writing the first book in a new series. “Still crime, still Copenhagen and Denmark, still Nordic Noir, but in a new universe and with a new set of protagonists.” Even though she loves the characters in The Tenant, The Butterfly House, THE HARBOR, and The Island (coming soon in the US), she says she cannot allow herself to get too comfortable with them.

“Any creative process demands that you push yourself out of your comfort zone every once in a while,” she explains. “Otherwise, you end up stiffening. My next series draws on my own family history. My father was born as a refugee when my grandparents fled from the Nazis in WW2. I have wanted to give voice to their story for a long time.”