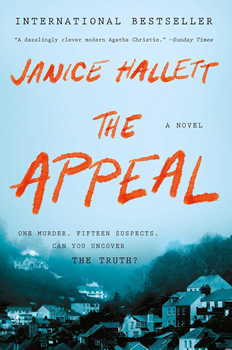 There are two things in life of the most critical importance: the serious illness of a child and the staging of a community play. One can only pray they don’t occur at the same time.

Unfortunately for the Fairway Players of The Grange, this is exactly what happens. As rehearsal for All My Sons kicks off, two-year-old Poppy—the granddaughter of the director—is diagnosed with a rare type of cancer.

Many would cancel the upcoming show, but not the Fairway Players. Especially not once they learn that Poppy’s only hope for survival comes from an experimental treatment that runs a staggering $350,000 and needs to be started immediately, payment up front.

Springing into action, the Players launch a frenzy of charity events scheduled to culminate in the final performance of All My Sons. Tensions run high as the amount needed continues to grow, suspect donors appear, offers of healing water pour in, and one of the cast members begins to investigate the experimental treatment—and Poppy’s family.

You don’t need thoughts and prayers to get through this book, however. The only things you need are a free weekend and the knowledge that this bestseller will dominate your life until you finish it. Had chores you wanted to do? Too late, you’ve started this book and the laundry will have to wait until next week. (Don’t worry, social distancing will ensure no one gets close enough to you to realize how bad you smell.) 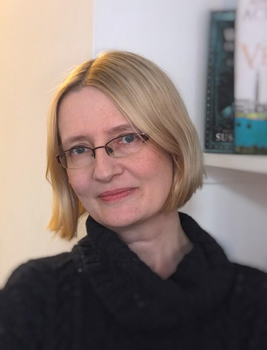 First off, the mystery itself is great. It’s an ever-weaving tapestry of new information coming to light that will keep you certain you know who the killer is, even as you change your main suspect every five pages. Second, there’s a cast of colorful personalities: the stern cancer specialist, the aristocratic director, the codependent geriatrics nurse, the Type A event planner, the “love, light, and crystals” student—and these are just five of the 15 characters at play.

The mystery of these attention-grabbing characters occurs solely through emails and text messages. There’s no omnipresent narrative and no first person internal monologuing all over the place—just a stack of digital correspondence you must comb through in order to determine who the killer is.

It’s very voyeuristic and oftentimes like reading through bizarre posts on NextDoor or someone else’s diary in the most delightful way. Gossip flies, as do falsehoods and family feuds. Soon you will be caught in between desperately wanting to know who the murderer is and wishing that the emails would never end because you are too invested in these characters’ lives.

But one of the characters has to die. And another has to be the killer.

In this exclusive interview with The Big Thrill, author Janice Hallett talks with us about writing her first novel and creating the unique characters (and voices) that populate THE APPEAL. 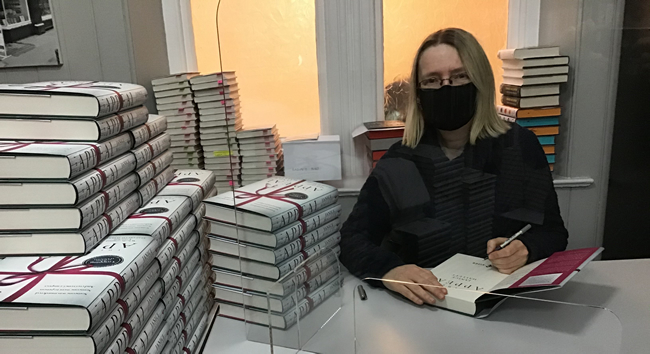 Hallett signs copies of THE APPEAL at her UK publisher’s office.

You’ve written speeches, news articles, screenplays, stage plays, and now a novel. What was it like for you going through the novel-writing process as compared to the others? Did something from your previous writing experience directly help you in creating your first novel?

The main difference is that writing a novel is an infinitely longer process compared to the others, so it was a whole new mindset. It takes a huge amount of discipline to sit down every day and work on something you won’t reach the end of for the best part of a year—and even then, you know it will need significant re-writing. By comparison, scripts for stage and screen can shape up very quickly, and the process is a joyous, collaborative medium as you work with producers, directors, and actors to hone the writing. With a novel, you’re on your own.

Journalism—despite the writing process being even shorter and faster—allowed me to develop very useful skills. It’s easy to be afraid of a deadline, and to let that fear paralyze you until it stops you meeting it. But when you work on a real-life short lead publication, you override deadline dread until it no longer exists for you. If there’s no news and nothing to write about, you have to find something. If you don’t feel like writing today, you have to write today. Writer’s block? There can be no such thing. It’s write or die. That experience really helped me push through any lulls in my enthusiasm over the long, lonely months of writing novels. 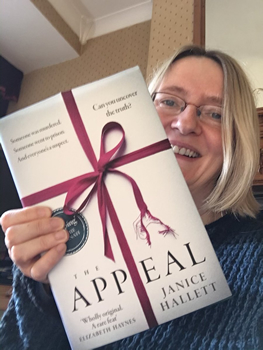 Hallett smiles for a selfie with THE APPEAL.

What was the idea that kicked this book off? Did you know immediately that the book would be best told in an epistolary format?

I didn’t think very much at all when I started THE APPEAL. I’d been generating ideas for TV drama series, and one was about a couple forced to return home after working overseas, where their experiences inform their suspicions about a local fundraising campaign. When I decided to try writing a novel, I wondered if I could use that idea, but see it through emails going back and forth between the minor characters, off-stage so to speak. That gave rise to the aspect of the book I’m most proud of—the fact we never hear from the main characters at all.

How long did it take you to figure out the form and structure for this book? What was your process in shaping it?

It took a year to write the first draft. I didn’t plan or map anything out, but wrote organically, always having in my mind the thought “what happens next?” Of course, I went back and tinkered endlessly with that first draft. I paid a lot of attention to tiny details, like the way each character opens and signs off when communicating with every other character and made that a key pointer for how they felt about that person. 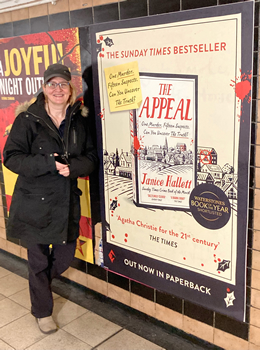 Hallett poses with an ad for THE APPEAL in a London tube station.

Were there any additional forms of communication that you ultimately decided to cut or any actual narrated scenes that you removed?

The first draft was 20,000 words longer than the book you’ll read now, and most of what I removed were emails from Issy to Sam. Early readers (my agents and their assistants) were in agreement we didn’t need the experience to be quite that immersive!

Every character has their own identifiable voice—the reader can read one of the emails and know almost instantly which character wrote it. How did you achieve that?

That’s the attention to detail again. With each email I had in mind what the character writing really thought of the character they were writing to. I then allowed their true feelings to seep through in the words they used—or didn’t use. It’s very subtle in places, but I love hearing when readers have “got” it.

Very few of the characters are likeable—they’re the sort of folks one wouldn’t want to spend extended amounts of time with. Was it difficult being immersed in their heads?

I don’t think of any as unlikeable at all! They’re just flawed people like we all are. I think so long as you can understand why a character says or does what they do, then you don’t need to “like” them as such. For instance, Sarah-Jane is surrounded by a strong network of long-standing friends and family who love and support her almost unconditionally. She can afford to be short and sharp with anyone she dislikes because there are no consequences. By contrast, Issy has no such guaranteed support, so clings to her only perceived friendship, putting her all into it. When you understand where they’re both coming from, you see their outrageous or irritating behavior in character context. 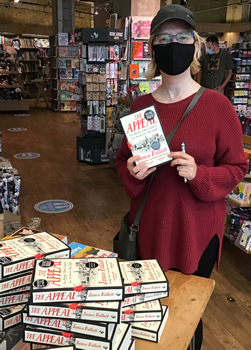 Can you tell us a little about your next book, The Twyford Code?

I wrote The Twyford Code back-to-back with THE APPEAL and was wary of accidentally writing the same novel twice. So I made a couple of rules: THE APPEAL was an ensemble story with female main characters, therefore The Twyford Code will be the personal journey of a male lead character. It tells the story of barely literate former prisoner Steve Smith, who records himself speaking into an old iPhone. The files we read are automated transcriptions of these audio recordings. It emerges that Steve has been encouraged by his probation officer to investigate an episode from his youth: the disappearance of his teacher after she discovered secret messages in an old book by children’s author Edith Twyford. As he re-connects with his old classmates, Steve gradually comes to realize his teacher may have stumbled across something very big indeed…