A Blizzard, a Boy, and a Brutal Murder 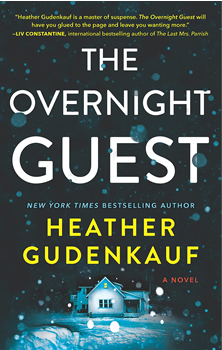 True crime writer Wylie Lark is renting a 100-year-old farmhouse in rural Blake County outside the small town of Burden, Iowa. With no television or Wi-Fi, Wylie hopes to finish her current manuscript without distraction.

Twenty years earlier, someone shot two people to death in the same farmhouse. Although 12-year-old Josie Doyle escaped harm, her best friend Becky Allen disappeared that night. They were both running from the sound of gunshots in the house, but Josie lost her grip on Becky’s hand, and they never saw her friend again. The crime is the subject of Wylie’s book.

Now, during the blizzard of the century, Wylie finds a young boy “curled in a tight ball and covered in a sheath of ice that glistened in the light from the flashlight,” frozen to the ground outside her cabin. With no way to get help—she’d broken her cell phone earlier that day and now the land line was down because of the storm—she had to get him into the cabin and revive him as best she could.

But who is the boy, and how did he get there? 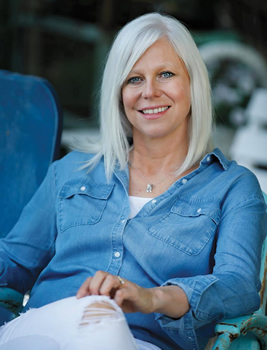 Amid the brutal cold and ice, Wylie tries to investigate and finds a car on the nearby road that crashed because of the weather. She knows the boy had to come from that car, but can’t piece together more than that.

It soon becomes clear that Wylie’s past is catching up with her present, and even more deadly than the blizzard, danger lurks nearby.

Told in alternating chapters between Wylie’s present and the story of the murders that happened in the cabin 20 years before, readers are immersed in a notorious murder mystery and its devastating aftermath.

In this interview, Gudenkauf tells The Big Thrill where she got her idea for the story and how her characters are ordinary people experiencing extraordinary circumstances.

What was the inspiration for the story in THE OVERNIGHT GUEST?

My inspiration came from where many of my ideas come from—the news. I found a 1980 article about a young Wisconsin woman who crashed her car into a ditch during a snowstorm. The woman ventured from the safety of her car to find help and, overwhelmed by the snow and the 22-below-zero temps, she collapsed. Six hours later, the woman was discovered with eyes frozen open and near death. Medical professionals couldn’t even get an IV into her frozen arm—the needles kept breaking. Incredibly, the woman lived, and the story got my writer’s mind turning. 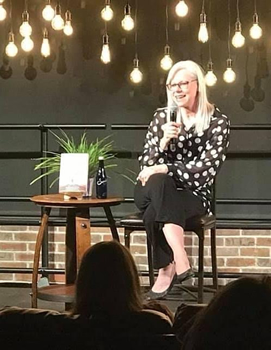 Gudenkauf talks with readers at a book event.

I explored the idea of what would happen if, during a blizzard, someone found a strange child on their property. From there, I wondered what would happen if this discovery was connected to something much more far-reaching and sinister, and THE OVERNIGHT GUEST was born.

I’m also obsessed with true crime podcasts, documentaries, books—the idea of having a main character who was a true-crime writer appealed to me. Wylie was so much fun to write. Here’s this woman who travels across the country detailing the most gruesome of crimes, and she finds herself caught up in a cold case. On top of this, Wylie finds a nearly frozen child in her front yard. The two are stranded in an old farmhouse during the blizzard of the century. It’s a lot, but if anyone can handle it, Wylie can. She’s tough and has a fierce will to survive.

What roles do the themes of parenthood and friendship play in the story?

I explore the theme of parenthood and how different, sometimes unexpected, individuals fill that role in several of my novels, and THE OVERNIGHT GUEST is no exception. Wylie plays the role of mother and protector to a strange child while the relationship with her own son has been suffering. In doing so, she learns a lot about herself. There is also a storyline about a mother and child in a heartbreaking situation who somehow find joy and hope in the most dismal conditions. 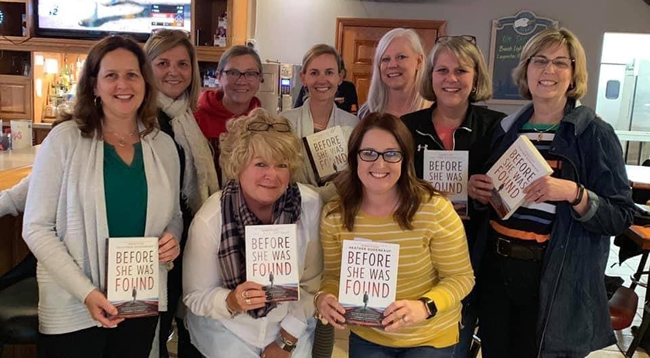 Gudenkauf (back row, third from right) visits with a book club.

Can you expand on the theme of imprisonment, both literal and metaphorical, that is woven into the story?

First, there’s the name of the small town where the story takes place—Burden. I mean, with a name like that, bad things are bound to happen. At the outset of the novel, a young girl disappears from her best friend’s home. This is the catalyst for the theme of imprisonment that runs throughout the story.

After the disappearance, those left behind end up in a sort of prison based on the devastating circumstances. The family of the young girl struggles, law enforcement is stymied, and the townspeople are terrified and suspicious of one another.

Years later, Wylie, a true-crime writer, comes to finish her book about the crime that irrevocably changed the town of Burden. Enter the snowstorm. Even modern technology can’t contend with a good old-fashioned blizzard, and Wylie and a small child find themselves imprisoned within the walls of an old farmhouse for the duration of the storm.

Other than the fact that you grew up in Iowa and still live there, is there another reason your novels are set there? 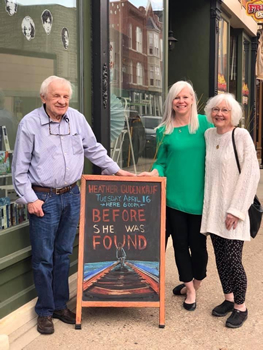 Gudenkauf and her parents celebrate the release of her 2019 thriller Before She Was Found at River Lights Bookstore in Dubuque, Iowa.

Iowa was such a great place for me to grow up. My husband and I loved it so much we stayed, and we’re raising our children here. There really is something in the saying, “Iowa nice.” To me, the settings of my novels are just as important as the characters. The small towns and rural locales are the perfect spots for the kinds of thrillers I love to write. Whether the novel is set on the edge of the woods, near a river, next to the railroad tracks, atop a circuit of caves, or in an old farmhouse next to a cornfield, Iowa has it all and then some. These seemingly idyllic settings provide such a dichotomy to the sinister goings-on in my novels.

Burden, the fictional Iowa town where THE OVERNIGHT GUEST is set, is inspired by the great small towns I’ve had the pleasure of traveling through and visiting. Strangers wave as you pass and would happily stop to help if you had car trouble, but as with any community, large or small, there can be a dark underbelly.

Near the farmhouse where the story takes place, a tree grows straight up in the middle of the gravel road. That tree plays a critical role in the novel and is based on a real tree found in Brayton, Iowa. Supposedly, over 161 years ago, a surveyor placed a green cottonwood stick into the ground at the exact spot the county line was to be drawn. Today, the tree is over 100 feet tall and 18 feet wide. It’s such a unique spot and a fun story, and I knew I had to include it in the book. I love sharing little fun facts about my home state with readers.

Tell us more about your series Sidekicks and Side Trips. 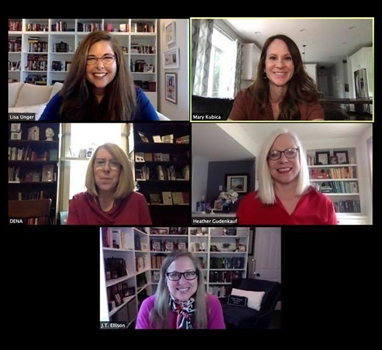 To celebrate the release of her 2020 thriller This Is How I Lied, Gudenkauf participates in a Zoom launch party with authors Lisa Unger, Mary Kubica, and J.T. Ellison and bookseller Dena Kurt from River Lights Bookstore in Dubuque, Iowa.

Sidekicks and Side Trips started during the pandemic when we were all cocooned in our homes, and book events came to a standstill. I missed connecting with readers and other authors, but loved seeing everyone’s pet pics on social media. Why not combine the two? I asked a few of my author pals if they’d like to chat about their pets on camera, and they were all in. The authors introduce us to their furry friends, and I ask them fun questions, like how their pet came into their life, if their pet had a theme song what would it be, and if their pet could describe them in three words what would they say. I’ve met some great dogs, cats, a rabbit, and even some ducks!

Amid chatting with everyone and their pets, I realized there were many authors I wanted to talk to who didn’t have pets. That’s when I added the Side Trips episodes. In these videos, I ask the authors what they’re passionate about. It’s been such a great way to learn something new about authors outside of their writing lives. Of course, we also talk about the authors’ current or upcoming novels and what they’ve been reading.

On top of this, along with authors Kaira Rouda and Kimberly Belle, we host a web series called Killer Author Club where we interview thriller writers. We talk about all things killing (of the fictional variety), sip on cocktails, and give away books. It’s been so much fun!

Though my novels are often described as domestic thrillers and deal with intense and dark plotlines, they are populated by ordinary people who find themselves in these extraordinarily frightening situations. Somehow, the characters in THE OVERNIGHT GUEST still find hope and good in the world in even the most challenging circumstances. I also hope that readers walk away with what I love getting from a good book: a suspenseful, edge-of-your-seat escape into the lives of some characters that you’ve grown to care about and want to see how things end up for them. If I’m able to provide that escape for readers, I’d be thrilled. 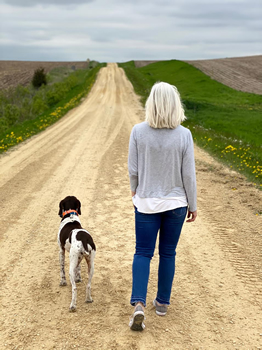 Gudenkauf with her sidekick, Lolo

Can you tell us a little about your next novel?

I’ve been working hard on my tenth novel, and I’m incredibly excited about it. I’m not in a spot where I can share too much about the story, but it is so different from anything I’ve ever done before. I even step outside my beloved home state and take the characters on quite the adventure in wine country.

Someone told me once to write the books I’d like to read, to follow my instincts, and to write every day. Great advice I come back to often.

Readers probably don’t know that I didn’t learn how to swim until just this past year. My husband and daughter taught me, and now you might find me at the local YMCA swimming laps!