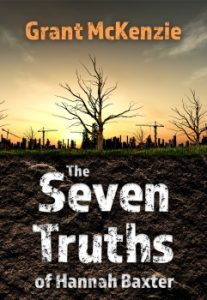 Hannah wants the whole city to know the pain she feels—even if it means her own death. Having locked herself in an underground bunker with limited air to protest the rape, humiliation, and suicide of her teenage classmate, Hannah is broadcasting her slow death while revealing secrets about the boys who raped her friend. Racing to find her is Child Protection Officer Ian Quinn, who once had Hannah as a client. And as Hannah’s live broadcast attracts more and more viewers, the stakes rise as the secrets she is sharing prove damaging to some very powerful and dangerous people.

Grant McKenzie recently spent some time with The Big Thrill discussing his latest thriller, THE SEVEN TRUTHS OF HANNAH BAXTER:

Inspired by the tragic but real-life events of teenage victims (Audrie Pott, Daisy Coleman, and Rehtaeh Parsons), THE SEVEN TRUTHS OF HANNAH BAXTER explores the aftermath of rape and suicide—not only on the victims but their friends and family. I want readers to understand how talking to our teenage sons about the serious impacts of how they treat young women can destroy lives. 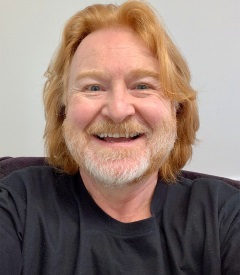 Written with compassion and empathy, THE SEVEN TRUTHS OF HANNAH BAXTER explores how anger can blossom into revenge and how real-life events are shaping our society.

The extent of rape-culture in our youth is terrifying, and the lives it destroys is heart-breaking. And yet, I fear, I am only scratching the surface.

The reader likely knows somebody who has experienced sexual violence in their lives.

Q: This is your 11th novel, but the first that you have self-published. Your other 10 novels were all traditionally published—and published worldwide. Why self-publish this time?

A: After my 10th novel was published by Polis Books, I took a break from writing due to a battle with prostate cancer. Having come through the other side, I was anxious to write a new novel but discovered that publishers and agents were no longer interested in me. That was quite a blow as I believe this is a strong book that readers will enjoy, and traditional publishing has the best chance of a book being translated around the world.
Once I shook off the disappointment, I decided that I still needed to release the book into the wild, so I have chosen to self-publish.

Born in Scotland, living in Canada, and writing American fiction, Grant wears a toque and kilt with his six-guns. His debut novel, Switch, earned fantastic reviews internationally when it was published by Bantam UK, in Germany by Heyne, and in Canada by Penguin. It has also been translated into Complex Chinese for Spring International Publishers of Taiwan, plus Polis Books made it available in the US.

Grant’s second novel, No Cry for Help, also garnered stellar reviews when it was published in the UK by Bantam TransWorld and in German translation by Heyne. Grant’s next five novels, including the first two Ian Quinn thrillers, were published by Polis Books in the US.

Writing under the pen name M.C. Grant, a first-person female mystery series set in San Francisco was launched in the US by Midnight Ink. Angel with a Bullet was followed by Devil with a Gun. The third Dixie Flynn adventure, Beauty with a Bomb, was short-listed for the prestigious Shamus Award.

Grant’s short stories have been featured in First Thrills anthology edited by Lee Child from Tor/Forge, plus Out of the Gutter and Spinetingler magazines, and his first screenplay won a fellowship at the Praxis Centre for Screenwriting in Vancouver, BC.
As a journalist, Grant has worked in virtually every area of the newspaper business from the late-night dead body beat at a feisty daily tabloid to editor at two of Canada’s largest broadsheets, plus editor-in-chief of the alt-weekly Monday Magazine. He has also contributed numerous technology/humor columns to magazines around the world. He currently works with people experiencing homelessness in Victoria, BC.