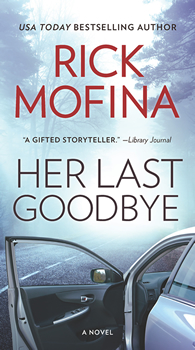 When Jennifer Griffin goes missing, investigators discover that the “perfect wife and mother” has some troubling secrets. But in bestselling author Rick Mofina’s latest thriller, HER LAST GOODBYE, she isn’t the only one. With the threads of their ideal life unraveling, Jennifer’s husband Greg is forced to confront the lies that hold their marriage together—and a dark past that refuses to stay buried.

For years, author Mofina worked as a journalist reporting from all corners of the world. What makes the suburbs, in this case the town of Buffalo (which Mofina modeled after his hometown of Ottawa, Canada), so ripe for the world of thrillers.

“I’ve reported from Kuwait, the Caribbean, and several parts of Africa,” he says, “and I’ve drawn on that experience for some of my thrillers. But nothing has the intimacy of using your own backyard. For me, it makes the story more real. I’ve traveled across the US and Canada; the suburbs of North America are so similar with expressways, the same chains, the same planned neighborhoods where people are living their lives.

“I decided to play up on the Tolstoy thing how happy families are alike, but every unhappy family is unhappy in its own way. The suburbs may look the same, but there are secrets behind those cookie-cutter doors. That’s the way I decided to go with HER LAST GOODBYE. Using my own suburb as a model and using the fact that my wife belongs to a suburban book club. It got me thinking. What if one night she failed to come home from one of the meetings at a friend’s house? It was a jumping-off point for me. Suddenly, the routineness of everyday life is turned upside down. It made the story close, personal, and terrifying.”

What common themes has Mofina come across telling stories from around the globe? 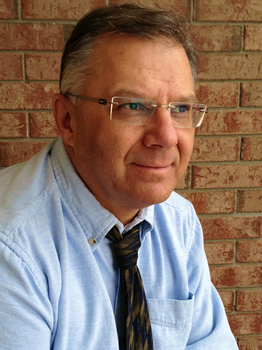 “The most common,” he says, “is that people are the same everywhere. In Doha, Qatar, in suburban Denver, in Cairo, Egypt, in Dakar, Senegal, and so many other places, I’ve learned that people would go out of their way to help a stranger. On assignment in the desert outside of Kuwait City, I was fascinated by a man and his son walking with their camel. They invited me to sit on it. In Addis Ababa, Ethiopia, we visited a woman demonstrating her loom. She insisted I have a spool of the material she’d made to take home for my wife. Outside Abuja, Nigeria, handmade caskets were sold on the roadside, and the man who made them was proud to display their craftsmanship.”

One of Mofina’s characters refers to the missing persons case as turning into a “Russian nesting doll.” How does that analogy relate to the actual process of writing of a thriller?

“With the Russian doll, you open a wooden doll and find a smaller one inside, open that, then find another smaller one, and so forth,” he says. “The dolls decrease in size down to the final tiny doll. The analogy relates to crafting a thriller because building the story is about layering. At first you introduce the reader to the problem or conflict, but when they look deeper, they find a new problem, and once you take them beyond that one, there’s another and another, as you twist and turn closer to the final truth.”

Mofina has been quoted as saying that one attractive aspect of the thriller is the theme of “ordinary people put into extraordinary situations.” This sounds more than a bit like Hitchcock. How does his work influence Mofina’s? What other filmmakers have inspired his writing?

“Along with Hitchcock,” he says, “William Friedkin, Stanley Kubrick, and Francis Ford Coppola, to name a few. When you boil it down, they all tell a good story; each movement, each scene tells a story.”

As a journalist, Mofina has interviewed death row inmates. What has he learned from speaking with them that would surprise most readers?

“How mundane the condemned are in conversation,” says. “I interviewed a killer in Texas who has since been executed. He admitted his guilt, accepted his fate for murdering a law enforcement officer. But the whole time, he sounded like a guy at a bar, staring into his beer and talking about his mistakes. In Montana, I interviewed a man still awaiting execution for killing two people. He said the ghosts of his victims haunted him in nightmares at the foot of his cot. But in conversation, it was like talking to your neighbor, if you set aside the fact that he was in leg irons and handcuffs shackled to a belly chain, which he sometimes fidgeted with as we spoke.

“Then, over the phone,” Mofina continues, “I interviewed a convicted killer imprisoned in San Quentin. He walked off death row on a legal matter. Later, when he was free, he would visit me in the newsroom and tell me about his problems, like a guy at a bar. He ended his life sometime later by suicide in his cell after he was charged with another death. These men who committed the most heinous acts were very ordinary.”

Since 2000, Mofina has had four series characters; none of those books have overlapped (in real world publishing time) with the others. How does he know it’s time to end a series? What separates the series characters from each other?

“The characters in four series were all reporters,” he points out. “On the most obvious level, they’re separated by geography. The first series was set in San Francisco, the second in Seattle, the third and fourth in New York and around the world. I drew from my own experiences visiting or reporting from those areas. I drew upon the help of fellow reporters from those locations and my own imagination. The characters were also at different stages in their careers. From burned-out veterans, to rookies, to professionals working in dire times for the industry. Each series came to an end either with me wanting to try something new, or the publisher suggesting it.”

Finally, if Mofina could put his own panel together for ThrillerFest—participants need not be alive to be invited (why discriminate?)—who would be on the panel, why, and what would the topic be?

“I think Dostoevsky, Victor Hugo, Joseph Conrad, Thomas Harris, and Stephen King. The topic would be ‘Why Stories Matter.’ I think that might draw a crowd and last for hours.”

Rick Mofina is a former journalist who has interviewed murderers on death row, flown over LA with the LAPD, and patrolled with the Royal Canadian Mounted Police near the Arctic. He has also reported from the Caribbean, Africa, Kuwait, and Qatar. He has written more than two dozen crime fiction thrillers that have been published in nearly thirty countries. He is a two-time winner of The Crime Writers of Canada Award of Excellence, a Barry Award winner, a four-time Thriller Award finalist, and a three-time Shamus Award finalist. Library Journal calls him “One of the best thriller writers in the business.”