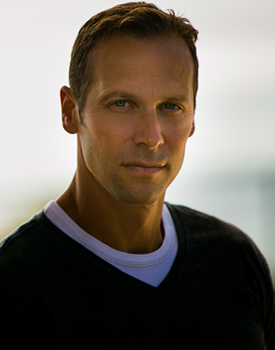 Gregg Hurwitz is no stranger to Hollywood. He’d already worked as a screenwriter for nearly a decade when he made his first spec sale to a major studio in 2010, while serving as a writer and producer on ABC’s V revival. He’s written for or sold scripts to most of the major studios, including Sony, Netflix, Amazon, ABC, Disney, and HBO, and his producing credits include the 2017 thriller The Book of Henry and Netflix’s mind-bending 2021 actioner Sweet Girl. Warner Bros. acquired the rights to Hurwitz’s Orphan X thrillers before the first installment even hit bookstores.

But a recently announced book-to-film deal is impressive even by Hurwitz’s standards. Paramount Players has optioned eight of Hurwitz’s standalone thrillers, with an eye toward developing them as career launchpads for a diverse group of screenwriters and directors. Hurwitz will co-produce the films with Scott Frank, who recently won an Emmy for his work on Netflix’s The Queen’s Gambit.

Hurwitz says the two met after a mutual friend introduced them. Hurwitz was keenly impressed by The Queen’s Gambit—“It was my favorite TV story I’d seen in years,” he says—and a longtime admirer of Frank’s work as a screenwriter, which included adapting such high-profile crime thrillers as Elmore Leonard’s Get Shorty and James Lee Burke’s Heaven’s Prisoners. After what Hurwitz describes as “a bourbon-lubricated Zoom call,” the pair realized how closely their creative approaches aligned. Talk soon turned to how much fun it would be to produce together. 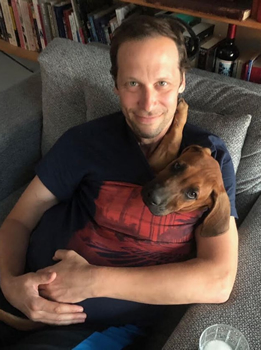 Two guys, one shirt. Pandemic time with the pup.

But when Frank took the project to Paramount Players, a film production division of Paramount Pictures, he and Hurwitz had an ulterior motive. The deal wasn’t just an opportunity to get Hurwitz’s stories on screen—it was a chance to boost the careers of up-and-coming writers and directors. While Paramount will largely manage the process of recruiting talent to adapt the books, Hurwitz says he and Frank will also mine their personal relationships to fill those roles.

“It’s so goddamned hard to break into screenwriting today, and Scott and I are excited at the prospect of finding new voices to collaborate with and support,” Hurwitz said in a press release. Hurwitz tells The Big Thrill that he’s eager to turn his work over to new voices. As a producer, he’ll help Frank shepherd the stories through production, but Hurwitz is quick to point out that he wants these filmmakers to bring their own voice and vision to each story.

“I want to be involved in a support role to the screenwriters and directors we bring on board,” he says. “I want to make sure they’re armed with as much as I brought to each book in the year I spent writing it—the research, subject matter experts, essential themes, etc.—but it’s also important than any artist working on an adaption makes it his or her own as well.” 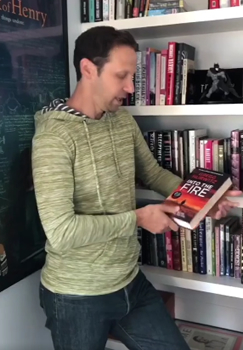 A glimpse of Hurwitz’s vast library.

The books represent a 12-year stretch of Hurwitz’s publishing career, beginning with 2002’s Do No Harm and ending with 2014’s Don’t Look Back. Each title is a standalone thriller, but the books are united by common thematic elements. Collectively, they make up what Hurwitz calls his “Marked Man” series. Each book features an everyman—or, in one case, everywoman—protagonist forced into an unthinkable scenario. In 2012’s The Survivor, a troubled war veteran dying of Lou Gehrig’s disease must take on a vicious Ukrainian mobster to save his family; in Don’t Look Back, a single mom on a hard-earned vacation is stalked through the jungles of Oaxaca by a human predator. The other titles included in the deal are The Crime Writer (published in 2007), Trust No One (2008), They’re Watching (2009), You’re Next (2011), and Tell No Lies (2013).

“These are my Hitchcock everyman thrillers (and one everywoman thriller)—where we find ordinary people pushed to extremes by extraordinary circumstances,” Hurwitz says. “To survive—and to save their families—my protagonists must find the extraordinary within themselves.”

With their rapid-fire pacing and intensely cinematic action sequences, Hurwitz’s thrillers seem ready-made for adaptation. But he says he doesn’t give any thought to book-to-film potential while he’s writing his novels. “Completely different lanes,” he says. “Every book I write has to function first and foremost as a novel. When I adapt my own work (or someone else’s), I have to switch hats and become a screenwriter, which means I’m much more merciless about cuts, leanness, combining characters, inventing new frameworks, and more.” 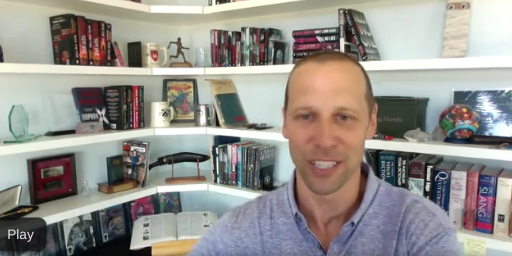 It’s too early to know if the films will be released theatrically or on streaming platforms, and Hurwitz couldn’t be persuaded to reveal any details about who might be scripting or directing the adaptations. But Hurwitz has plenty of other projects to keep him busy in the meantime: the next Orphan X thriller, Dark Horse, is slated for release in February 2022, and he’s currently at work on the next installment. His spec script Sabine, co-written with frequent collaborator Philip Eisner and centering on a female detective on the trail of a serial killer, is “moving along nicely in development with Screen Gems,” and he just launched a new comic book series called Knighted from AWA. He’s also got his hands full with his newest Rhodesian ridgeback puppy, Nala.

Finally, as content-hungry streaming platforms continue to comb bookshelves and publishing trade journals for new material, Hurwitz has some sage advice he hopes novelists will keep in mind when Hollywood comes calling.

“It’s important for authors to make sure they can leverage a deal that they’re happy with (or hold off until they can),” he says. “Choose your team wisely—on the basis of creative alignment and character. Nothing replaces character. You try to set up a positive feedback loop with the process so that everyone makes everyone else’s work better and the bar keeps getting raised. Ultimately that’s all you can do. And then you hope the team can capture magic as we hope to capture it on the page as novelists.”