In Pursuit of The Body Man 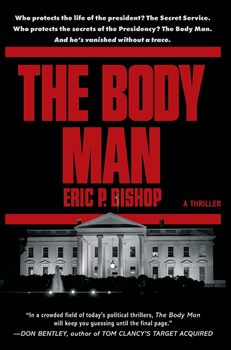 The first time Eric P. Bishop heard the term “the body man” was during President Obama’s tenure—the media had used the phrase to describe Reggie Love, a man who worked for the Obama administration.

What was his role for the president? What did—and didn’t—he do?

Bishop didn’t really care—but the term stuck. So much so that it not only gave Bishop an idea for his debut, but also the title.

“I decided to take the title and put my own spin on it,” he says. “Instead of a person responsible for helping the president, what if there was a person whose job entailed protecting the actual office?”

Once he came up with that concept, Bishop says he was “off and running.” The result is a bestselling political thriller in which two FBI agents—one seasoned, the other a rookie—are tasked with finding the Body Man, a “secret” protector who knows a lot of secrets about the Oval Office…and who now seems to have disappeared.

Bishop ratchets up the suspense by keeping readers guessing who the Body Man is and what he’s used for—but when his identity is revealed in a pulse-pounding twist, you’ll want to keep reading.

“I’m frequently asked, ‘Is there really a person in the White House with the responsibilities described in THE BODY MAN?’ I’ll never tell,” Bishop says. “But I can guarantee the truth would surprise most people.”

There are a few things Bishop is willing to talk about, though—and he does so here, in this interview for The Big Thrill.

While writing is your passion, so too is travel—which has been somewhat hindered in the past couple of years, of course. How has reading—and writing—helped to scratch that itch?

Well, my travel has certainly been curtailed in 2020/2021 due to COVID. At least on a larger scale. But I’ve been fortunate to travel extensively within the region I live in since we’ve not faced the same restrictions others have during these challenging times. I’ve been actively writing on multiple books during the pandemic and tried to set as many scenes as I could in places I’ve been previously or places I could visit during the travel restrictions. Of course, that doesn’t work perfectly, so I’ve had to rely on research via Google Earth to fill in some gaps when I can’t put boots on the ground. I did make it down to New Orleans in August to write a critical scene for my next book Breach of Trust, that is until Hurricane Ida smashed into Louisiana and I had to cut my long weekend in NOLA short. During these strange times the past few years, I’ve certainly found comfort in good books, and I hate to admit I’ve binge watched quite a lot of Netflix, Amazon Prime, and HBO Max series. I’m back on a little-to-no television kick as I try and complete two books in the upcoming months.

THE BODY MAN is written with such authenticity, I assumed you had come from a career in politics, but I see your background is in corporate America. What kind of research was required to write THE BODY MAN, and was there anything surprising you learned in the process?

I will say truth truly is stranger than fiction. The book heavily involves the FBI and US Secret Service; and while I did not work with or for either organization, I used various books and online resources to create the narrative I wanted to tell. As for hands-on research, I actually graduated from the FBI Citizens Academy but not until after I finished an early draft. It did allow me to go back and tweak certain parts of the book. In regards the US Secret Service component, I did have the manuscript reviewed by a former agent, and he didn’t hate it or punch many holes in it. So there’s that. How accurate it was or was not he wouldn’t say, and I’m sure his NDA was part of the reason. Of course, I took some creative liberties, but that’s because, like the Body Man, I took a vow to protect the Office of the President, at all costs.

I really enjoyed the working relationship between FBI agents Eli Payne and Kat Stone—who seem primed for a series. Is there a Book 2 on the horizon for these two? If so, we’d love to hear about it—as well as anything else you might be working on.

THE BODY MAN opened up several avenues for future books in regard to the characters I crafted. I love creating new antagonists and protagonists, and when people connect with them, I’ve certainly succeeded in what I set out to accomplish. Eli and Kat most definitely do the heavy lifting in THE BODY MAN, and I look forward to sharing their adventures in future books. The Body Man plays a pivotal [role] in Breach of Trust, the sequel, and I also introduce a new character. This new protagonist as well as the Body Man will have intersecting storylines that up the ante for Breach of Trust. And yes, to answer your question, we’ve not seen the last of Eli and Kat. I actually have a spin-off series I’d like to craft for them if everything falls into place. Time will tell.

It’s hard to dive too much into the plot of THE BODY MAN without giving away any spoilers, but I was impressed with the twists and turns you included in the novel, including that final twist at the end. Could you please share a bit about your writing process? Plotter? Pantser?

For years I was completely a pantser. But as time passed, I’ve started to employ more elements of plotting. I’ve traveled a lot for work (at least pre-COVID) and learned to write just about anywhere at any time. I finished my first novel in 2014 while in Yosemite N.P. That moment of completion while surrounded by God’s majesty will go down as being the most powerful writing memory in my lifetime. I don’t believe there’s a simple formula to write besides to be consistent and faithful in putting your thoughts on paper. However, what works for one person is a horrible way to get something done for another. The only thing I would tell anyone who starts a project and thinks they want to write a book is this: Never quit. If you start a novel, finish it, whether it takes you weeks, months, or years. Don’t finish the writing for others, do it for yourself. The sense of accomplishment will overwhelm the pain and discomfort many feel when they put words to paper.

THE BODY MAN is packed with action, reminiscent of a Jack Carr or Don Bentley thriller. Who are some of the authors that have inspired you and why?

The first modern-day thriller I read was by Tom Clancy. My dad gave me a tattered paperback, and my love of the genre started at that moment. Later on, when I started writing novels of my own, I always went back to Tom as my source of inspiration. As fate would have it, Don Bentley was generous enough to provide me a blurb for THE BODY MAN, and now that Don is writing for the Clancy family, I’m able to have the name Tom Clancy on my debut book cover. That proves to anyone reading this that dreams come true. Vince Flynn also served as a huge source of inspiration. Vince took the style of Clancy and parsed it down, packing tons of action and political intrigue into a tight narrative. I thank both Tom and Vince in my acknowledgments since they really are the two authors with the most influence on my writing style. I only wish I could have told both of them in person.

Launching a debut is hard enough, without adding in the extra stress of the pandemic—but you launched quite an aggressive marketing and promotion campaign to support the release of THE BODY MAN. What advice would you give to debut authors about promoting their work? Were there specific things that worked exceptionally well?

Well, first you have to be the biggest cheerleader and advocate for your work. You can’t expect anyone else to promote it heavier than yourself. I was fortunate to establish a robust social media following and get support from incredible authors who helped me spread the word this fall. I didn’t have a social media presence before 2016 and realized I had to have one in this digital age of publishing. It’s a blessing as well as a curse.

The cool factor is you can interact with fellow scribes and fans on various social media platforms. The curse is every tweet or post keeps you away from what you should be doing, writing the next novel. It’s a delicate balancing act, and you need to find a happy medium to promote your work while also putting in the hard work on the next book.

I think what has worked best for me personally is simply being authentic, engaging with readers, and working on a grassroots effort to help spread the word regarding the release of THE BODY MAN. Lots of services are offered by countless companies and groups, but you really need to be careful as to where you direct your precious marketing funds. As the old adage goes, if something sounds too good to be true, it probably is. I am proof, though, that you can get the word out about your book without investing a tremendous amount of financial resources. Authors need to find the approach that works best for them and be willing to pivot if they aren’t getting the results they expected. There’s a huge learning curve, and I’m still on it myself.

The support I’ve received for THE BODY MAN has been tremendous, and I’m grateful the book has been so well received by readers worldwide. I’m grateful this year that not only did I become a debut author, but I’ve become an internationally selling author. It’s quite humbling, but only Step 1. Next up is Breach of Trust, and I plan to keep delivering quality reads to an ever-growing reader base for the foreseeable future.

Between the Lines: Jacquelyn Mitchard