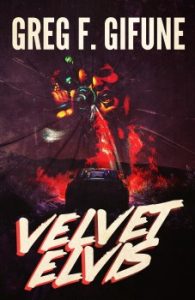 Sonny Cantone is having a really bad day. He’s broke. His girlfriend left him. He drinks more than he should and smokes a lot of pot. And now some lunatic stole his car. As an ex-con with little experience in anything other than criminal enterprises and bad decisions, Sonny’s job prospects are not looking good, even in the middle of a blistering summer in the little Cape Cod tourist trap town he calls home. Worse still, he’s sleeping with a shady stripper that works as an informant for a dirty cop that hates him and has a penchant for extreme violence. So when Sonny’s old partner-in-crime and stoner buddy Crash offers to bring him in on a caper to rob a velvet painting vendor that promises to yield some quick money, he has to listen. But nothing has prepared Sonny for the vortex of mayhem and madness he’s about to fall into.

In a cloud of marijuana smoke, he and Crash descend into the hot summer night, on the run from an array of crazed characters populating the darkest and seediest corners of Cape Cod after dark. And now, what seemed like an easy score turns instead into a surreal nightmare both horrific and darkly hilarious. Sonny just wants to get home, but it’ll take all night—this night—a crazy night that just keeps getting crazier, and one he’ll need to make right before things spiral so far out of control they’ll never get out alive.

Sonny Cantone is having a really bad day. Wait until he sees the next twenty-four hours.

I hope they enjoy it, obviously, as it’s a dark crime piece but with some dark humor as well (not something I generally do a lot of). Beyond that, I’ll leave it to the individual reader to draw from it whatever they want or need to.

I’ll leave that for other people to decide, but it’s a piece of work I’m proud of.

Even after 20+ years as a published author, there’s always something new. Each piece brings its own set of challenges and discoveries. With VELVET ELVIS specifically, I was surprised at how well it flowed from the start. This one all came together in one whole cloth, so to speak. The characters surprised me a few times too, in that they often seemed to want to go in directions I hadn’t thought of originally, which isn’t that unusual, but here it was more organic and more often than not worked when I listened to them and let them take me where they wanted to go. It was all still within the framework I had for the novel, of course, but they had a very strong voice throughout the process..

It’s loosely based on a crazy night I experienced decades ago (when I lived a very different life than I do now) with a friend at the time (the novel is dedicated to him, in fact) that I haven’t seen or heard from in ages. I don’t even know where he is or what happened to him, but I hope he’s alive and well. Several of the scenes, while of course fictionalized and altered, are based on actual things that took place that night.

I get asked this question a lot, and I rarely answer in specifics because there are so many. It also depends which genre, because I work in both crime and horror. But it’s a very long list, and I hate to forget anyone, so I don’t like to name names. Suffice to say, when it comes to crime, I’m a Jim Thompson, John D. MacDonald guy (with a little Elmore Leonard thrown in).

Greg F. Gifune is a best-selling, internationally-published author of several acclaimed novels, novellas, and two short story collections. Working predominantly in the horror and crime genres, his work has been translated into several languages, received starred reviews from Publisher’s Weekly, Library Journal and others, and is consistently praised by readers and critics alike. A feature film based on his horror novel Long After Dark is set to go into production in 2021. His novel The Bleeding Season, originally published in 2003, has been hailed as a classic in the horror/suspense genres and is considered by many, including Famous Monsters of Filmland, to be one of the best horror novels of its kind ever written. Greg resides in Massachusetts with his wife and two English Labrador retrievers, Dozer and Dudley.