A Deadly Day in the Life of Lemony Snicket 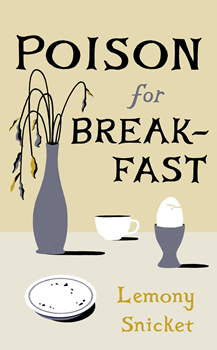 It’s almost impossible to discern whether that potentially controversial opinion is that of New York Times bestselling author Daniel Handler or the voice of his writing pseudonym Lemony Snicket—their personalities are so intricately combined, separating them is an exercise in futility. But one thing is for certain: both are passionate about eggs.

It was, in fact, an egg that inspired Handler’s long-awaited return to the Lemony Snicket universe, POISON FOR BREAKFAST.

If you’re one of the millions of fans who cheered Snicket’s return, you’re in for a treat—POISON FOR BREAKFAST embodies the author’s distinct conversational tone, both humorous and philosophical, a classic in the making. But unlike his bestselling Series of Unfortunate Events novels, POISON FOR BREAKFAST is not geared to youth. Instead, it’s a love letter to readers both young and old, about life—and yes, eggs.

This true mystery—if one chooses to believe so—begins at breakfast, when Snicket, a creature of habit, finds a note under his door that reads: You had poison for breakfast. What follows is a bewildering and whimsical trail of clues that will—hopefully—help Snicket solve the mystery of his impending death. But before “the end” the reader goes on quite the adventure—oftentimes deep into Snicket (and Handler’s?) mind.

Snicket wasn’t available to The Big Thrill for this interview, but Handler was kind enough to talk to us about the real-life inspiration for POISON FOR BREAKFAST, and solve, once and for all, the best way to prepare an egg. Spoiler alert: It’s not scrambled. 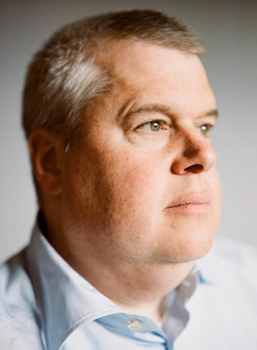 Your books infuse fiction with what could be (or often is) fact—and your new novel, POISON FOR BREAKFAST, embodies that same storytelling style. I’d love to know the inspiration for this short, but highly philosophical and engaging, mystery.

There was a child under my care, and it was breakfast time, and as adults have done for children since the dawn of time, I prepared something the child did not want to eat and then began scolding the child for not eating it. It was an egg. Eat the egg, I said to the child; it’s not poison. The child pointed out that if they ate the egg, when they were done eating the egg they would be closer to the moment of their death. Looking at it that way, the egg was poison. I found this idea so fascinating that I wrote “You had poison for breakfast” on a scrap of paper and ate the egg myself. The child had toast. Years later, there was a book, and here it is.

Though readers of all ages have enjoyed your previous novels, POISON FOR BREAKFAST feels more intentionally geared toward an older audience. What prompted this change of pace?

Hardly anyone of any age is interested in philosophy, I think, although I also thought that hardly anyone of any age would be interested in terrible things happening to orphans.  This is to say that I am wrong all the time, especially about what people might like. There is a new Gayl Jones novel, freshly published, for instance, and I cannot believe people are not dancing in the streets about it.

Handler lying down on the job

It’s difficult to talk much about the plot of POISON FOR BREAKFAST because it is a short book with fun surprises, and I don’t want to give away any spoilers, but I’d love to know what you hope readers take away from this quirky and bewildering tale of death—and breakfast?

If you are preoccupied with the fact that you will die, if there are scenes from movies and lines from books and verses from songs that cannot leave your head, if you are haunted by your own childhood and conversations you have had and events you have imagined but cannot forget, then you might find this book interesting. Also I hope people can finally learn that scrambled eggs are garbage.

“Bewilderment” is a theme not just in this book, but almost a part of your author aura, for lack of a better description. What does that word mean to you?

I think when we are bewildered, when we stand in utter confusion and look around wondering what in the world is going on, we are as close as we can possibly get to understanding the world. 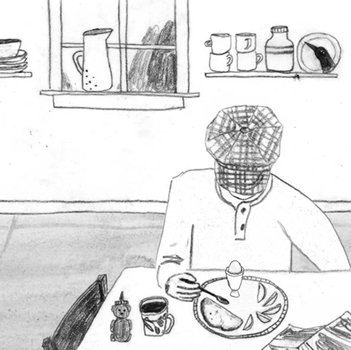 Breakfast is the most important meal of the day—but not as important as how one cooks their eggs.

I’m an egg and toasty fingers girl myself. Is Daniel Handler’s favorite egg preparation the same as Lemony Snicket’s? What is the ideal egg dish?

Obviously the ideal egg dish is a hangtown fry made with fresh oysters plucked out of the sea minutes beforehand, with many hours afterwards to recuperate. One cannot have this dish very often, alas, and it is the same with huevos rancheros, huevos divorciados, and various omelets, frittatas, etc. A simple egg preparation, however, can be enjoyed regularly, in this strict descending order: soft-boiled, poached, sunny side up, baked, over easy, raw, rotten, no egg whatsoever, scrambled.

Your books have such a lovely, conversational quality about them, your voice distinct. The Big Thrill is as much for aspiring writers as it is for readers, and you give such wonderful insight into the writing process in POISON FOR BREAKFAST. What advice would you give to writers when it comes to developing their voice?

Thinking about developing your writing voice is like thinking about developing your speaking voice: it will make you so self-conscious that you will just stutter awkwardly.  The thing to do with writing is to read. Read what pleases you. Reread your favorite things and try to figure out how they did it. Make your own canon and revere it, and then change it when you change your mind, and revere the replacements. Take notes. Keep writing. Don’t drink too much or be mean to your friends or abandon literature in despair. This is a calling and you are part of it. You can’t help it. Get back to work. 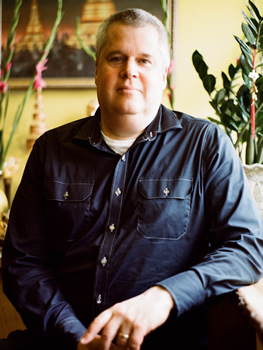 POISON FOR BREAKFAST is a whimsical mystery at heart. What mystery books inspired or captivated you as a child?

When I was young, the mysterious world of Edward Gorey captivated me like nothing else; as I grew older, Zilpha Keatley Snyder, Agatha Christie, Charles Baudelaire, Paul Auster, Muriel Spark, Toni Morrison, Haruki Murakami, Raymond Chandler, Percival Everett, and Anne Carson carried this mysterious torch. I do realize that some of these people are not always considered to be mystery writers. But they are, they are.

I know that you enjoy writing in libraries, but of course throughout the pandemic, libraries were closed. How did you navigate your “routine” during this time?

Oh, this is a very sad answer. I would take a long walk and then return home, in the hopes of tricking myself into believing I had walked to a library. It did not work very well. As another writer told me, “I’m missing strangers more than friends,” and I felt lonely without the other patrons of the library—or the coffee shop, or the grocery store, or the restaurant, or the bookstore, or the stationery store, or the movie theater, or the bar—who so often spur the ink on the page.

What can you share about what you’re working on next? Is POISON FOR BREAKFAST a teaser for more novels set in the Lemony Snicket universe?

I think Lemony Snicket will always be with me, as long as I am able to hold a pen.  Right this minute I am working on a Snicket project for the stage. After so long without strangers, I am looking forward to spending time with them—yes, even actors.