Starting with a Title 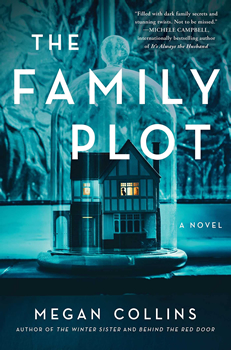 Megan Collins and her husband were out for breakfast when the seed for her third novel was planted. While enjoying pancakes and cheese omelets, the two were actually hoping to secure a title for the project Collins was already working on—a title that had eluded her for months.

Collins was looking for something that conveyed “family”—the theme of much of her work—when he suggested “The Family Plot.”

It didn’t work for the book in progress, but Collins latched on to the title.

“For the next few days, it haunted me, those three words looping like a warped record, something dark and foggy in its notes,” she wrote for Crimespree’s “Behind the Book” column last month. “I attempted to ignore it, intent on continuing the project that, in addition to remaining untitled, now felt uninteresting to me, as well. It didn’t matter, though. Far better, I figured, to have a story without a title than a title without a story.”

That changed when one morning, the story announced itself, fully formed.

THE FAMILY PLOT follows an unusual family that lives on an island and is obsessed with true crime. When gathered to bury their patriarch, they find another body in his grave. It’s a chilling page-turner guaranteed to keep your inner Murderino satiated.

In this interview with The Big Thrill, Collins shares more about the inspiration for this book, her fascination for family-driven thrillers, and what scares her. (Spoiler alert: a lot!)

As a true crime junkie, you had me at the premise. Would you consider yourself a “Murderino”? Was there a particular true crime story that inspired this book? 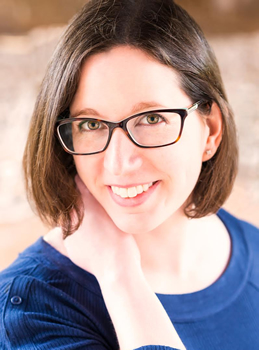 I am definitely a Murderino. I listen to podcasts like My Favorite Murder, Criminal, and In the Dark. I binged The Staircase and The Keepers as soon as they came out on Netflix. I’m fascinated by murder and the dark side of humanity—even as I fervently wish that neither of those things existed. There was no specific true crime story that inspired the book; it was more the idea of true crime in general, and how media and society have become saturated with it as it becomes more widely available and accessible to the public through the very podcasts and documentaries I love. With this book, I wanted to explore why so many of us are obsessed with true crime—what does it offer us, how does it help us, and, on the flip side, how does it potentially hurt us?

The Lighthouse family is quite bizarre, in the best way. I love how each character demonstrates how you can really immerse in the true crime world—I think that’s so relatable given society’s obsession with true crime. Are any of the characters based on real people? Was there one character that was more difficult to write?

None of the characters are based on real people, but I definitely wanted to use each character as a different representation of what can happen when you saturate yourself with true crime. For example, Dahlia, the novel’s narrator, doesn’t trust anybody. The only person she ever trusted is her twin brother, Andy—and she’s just discovered that he was murdered. For me, I find that when I’ve been listening to a lot of true crime podcasts, I tend to trust people a lot less; I think everyone, even the sweet old lady walking her dog down the street, could possibly be a murderer in disguise. So Dahlia represents that aspect of true crime enthusiasts, and her arc was then dictated accordingly. As for the most difficult character to write, each one posed their own challenges, but I think the mother, Lorraine Lighthouse, might have been the most difficult for me to pin down. She’s the character who goes through the most extreme change at the beginning of the book—from someone who used to teach her kids true crime stories and reenact famous murders in front of them to someone who’s feverishly baking cookies. I was always interested in her, and that tension between who she was and who she became as soon as she learned her son had been murdered, but it took me a little while to find out what was behind all that, and what exactly made her tick. 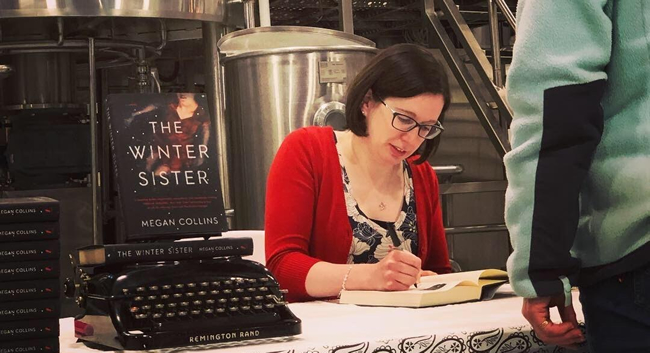 Collins signs books after an author talk hosted by Book Club on the Go at Connecticut Valley Brewing Company.

Several of your previous books have dealt with complex parent/child relationships. What draws you to “family dynamics” in terms of thriller writing?

I love reading and writing about messy, dysfunctional families! They’re such great fodder for stories and for exploring rich themes, and I love that no two families have exactly the same dysfunction (to paraphrase Leo Tolstoy). I think my interest in this is connected to another interest, as well, and that’s how our childhood and upbringing shape us into the people we are as adults, and how it creates certain blind spots for us or makes us interpret situations with a different lens than other people. I’ve found that giving my protagonists a strange childhood with a complicated relationship to their parents is an effective way to set them up for an intriguing story and journey as an adult.

The story is set on an island, which obviously just adds to the creepiness. What led to that decision? 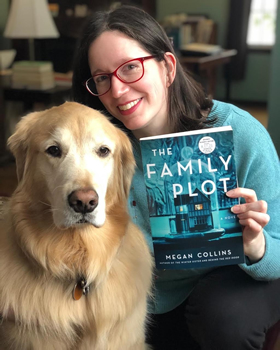 Collins poses with her dog (and writing assistant) Maisy after receiving advance copies of THE FAMILY PLOT.

I knew right away that, because of this family’s odd upbringing (learning about true crime as often as they learned about science, math, and English), they would be isolated from their community. People would view them as freaks, in a way—creepy, possibly dangerous, definitely suspicious. Because of that, I wanted to set the novel on an island, which would further isolate them from the world around them. I actually see the family as surrounded by rings of isolation. There’s their house itself—which the islanders refer to as “Murder Mansion”—and that’s the place where most of the scenes in the novel take place, so it becomes a little claustrophobic at times. But then there’s also the thick acres of woods surrounding the house, separating them from people even more. Then, further on, there’s this rocky shore, where the sand is dense and packed and not a place where anyone would take a casual stroll, and of course, around that is the ocean, a barrier between them and the rest of society.

THE FAMILY PLOT has such a macabre premise, but you hold back from going horrific. The Big Thrill is as much for aspiring writers as it is for readers. I’d love to know how you balance the darkness. 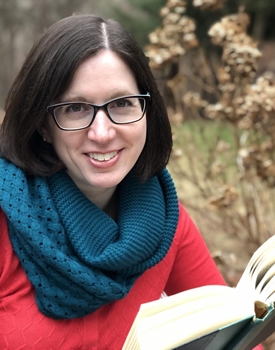 Collins reads in her backyard in Connecticut.

The story itself usually dictates how dark I go. For this one, since it’s a story about a family steeped in murder stories, living on an island where a serial killer was once active, it called for a lot of darkness. I love a really dark story, so that was no problem for me to do, but I also tried to balance it a little bit with the fun that comes with the overall strangeness of the family—their quirks, the absurdity of the mother baking cookies non-stop, one of the characters’ near-constant sarcasm and quips. Some people have likened THE FAMILY PLOT to a horror novel, though I don’t know if that’s really the case, as there’s never any physical violence or gore on the page. Usually in my books, the violence has already occurred once the readers enter the story (in my debut novel, The Winter Sister, the narrator’s sister is dead in the first sentence; in THE FAMILY PLOT, the murder that sets off the plot happened 10 years ago). And as for how I balance the darkness of my writing with my real, everyday life, I find it helps to have an adorable dog whose cute little face instantly snaps me out of the tension of my stories and reminds me of all the sweetness life has to offer.

As a thriller writer, you’re accustomed to darkness—is there anything that scares you?

Almost everything! Here’s an incomplete list: spiders, tornadoes, appendicitis, the doorbell ringing (I’m always convinced it’s a murderer), water towers, standing beside a cruise ship while it’s docked, very large things in general, the number of poisonous creatures in Australia even though I’ve never been there. I could go on!

The dioramas are particularly creepy in this book. Was there anything surprising you learned while researching for this book, both about dioramas and serial killers? 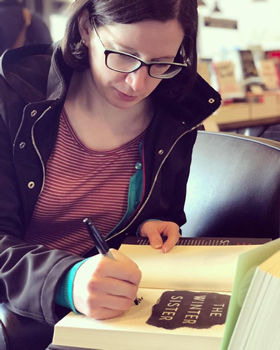 Collins signs books at RJ Julia, where her debut, The Winter Sister, was a staff pick.

The most surprising thing I learned while researching for this book is just how many serial killers have actually existed. I don’t have an exact number or statistic I can call upon, but I never ran out of new names and stories when combing for references to pepper into the book. I already knew that, one way or another, murder happens all the time, but serial killers always felt so much rarer to me, almost like an urban legend, a scary story told by children at a sleepover. It was chilling, then, to see entire lists of names, to think about the number of bodies each one had left in their wake. As for the dioramas, I was delighted to take a deep dive into Frances Glessner Lee’s Nutshell Studies of Unexplained Deaths, which were the inspiration for the crime scene dioramas in my book. Lee’s dioramas also depicted crime scenes and were used to train homicide detectives in the 1940s. In each of her dioramas, she included all the clues the detectives would need in order to solve the case, and they would have to pore over these tiny rooms, scouring them for the story of what had happened.

Right now, I’m working on a book about a pair of very close sisters-in-law whose bond is tested for the first time when the man who connects them becomes the prime suspect in a high-profile murder—and one of them begins to doubt his innocence.