From Heart-Racing Thrillers to Spine-Tingling Horror 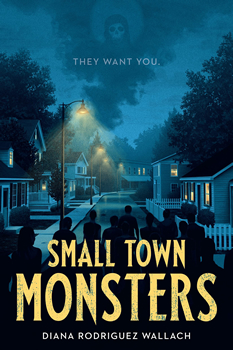 Regardless of your religious beliefs, possession is one of the most disturbing tropes in supernatural horror. Few things are as terrifying as the idea of losing control of your own body and mind, or looking into the eyes of a loved one and realizing that someone—or something—else is looking back.

In Diana Rodriguez Wallach’s SMALL TOWN MONSTERS, that’s what happens to Maxwell Oliver when his mother begins acting strangely and speaking in a voice that isn’t hers. Max, who’s just finishing up his junior year at Roaring Creek High, soon begins to fear for the safety of his seven-year-old sister, but he’s also scared to report his mom’s increasingly disturbing behavior. She has a history of substance abuse in the wake of his dad’s death, and Max is afraid he and his sister will be taken out of their home if she’s deemed incapable of caring for them.

Fortunately, Max doesn’t have to look far for help. Roaring Creek is also home to Vera Martinez, a classmate of Max’s whose parents are renowned demonologists in the mold of Ed and Lorraine Warren. Vera’s parents are away in Barcelona, and Vera is initially reluctant to get involved; her parents’ occupation has made her an outcast in their small New England town, and she doesn’t think she’s inherited any of her family’s talents. But when Vera begins to see terrifying evidence that a demonic cult has taken root in Roaring Creek and the clock is ticking down to an unthinkable tragedy, she agrees to take on whatever entity is living under the skin of Lily Oliver.

Rodriguez Wallach already has six well-received novels under her belt, including three adrenaline-fueled YA spy thrillers featuring Anastasia Phoenix. But SMALL TOWN MONSTERS marks two important milestones in her career: it’s her first horror novel, and her debut with a Big Five publishing house. In her latest interview with The Big Thrill, Rodriguez Wallach talks about the wide-ranging inspiration for her chilling new novel, the importance of representation in YA fiction, and her future as a horror writer. 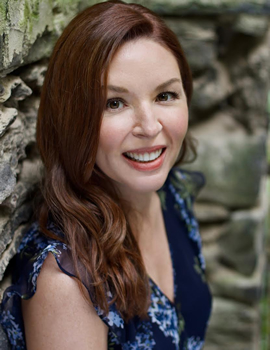 You’re best known for YA spy thrillers and contemporaries. Why did you decide to try your hand at a horror novel?

It all hit me when I watched The Conjuring for the first time. The movie shows the real-life Warrens place the demonic artifacts from their work in their basement, and I was struck with that mystical writerly inspiration, “Ooo, what if….a hurricane hit the house?” Then I began to wonder what it was like for their daughter to grow up in a home where monsters are real and the proof is right downstairs. In that moment, Vera Martinez was born. I’d never considered writing a horror novel before, but her story just kept growing until I had to put it on paper.

What did you find most challenging about pivoting to horror?

Building suspense in horror is just like building suspense in a thriller or contemporary novel. But what I needed to learn was how to add that extra chilling element. I worked hard on the sensory details in my spookiest scenes so even the tick of a clock or the scent of a flower could give the reader that prickly feeling. Also, I created what I call interlude chapters that are from the points of view of those in town under the influence of evil. Mastering the voice in those scenes—which are present tense with an unknown narrator—took some time. But my hope is that they add an extra layer of eeriness.

Rodriguez Wallach celebrates the launch of her 2018 YA novel Lies that Bind at Head House Books in Philadelphia.

What are some horror novels, stories, or movies that you consider influential?

I LOVED YA horror and thrillers growing up. I always cite Christopher Pike as being my biggest influence. I was a child of the ’90s and his books, along with R. L. Stine, hooked me on the horror genre. I’d never considered writing something in that vein before. I’m not sure why. Maybe it was a fear that I didn’t have the writing chops yet. But SMALL TOWN MONSTERS is my seventh published novel, and I now feel like I’ve written the type of book I would have read as a teen.

Tell me a little about what inspired SMALL TOWN MONSTERS.

It was a combination of a lot of different influences. As I mentioned, Ed and Lorraine Warren’s story (told via The Conjuring) was obviously a huge inspiration that led to the Martinez family’s demonologist careers. Additionally, I wanted to add more Latinx representation to the horror and kidlit genres. Surprisingly, in 2019, only 5.3 percent of children’s books published in the US featured Latinx main characters. That’s it. And it’s one of the things that makes SMALL TOWN MONSTERS different. Both of my POV characters, Vera and Max, are multicultural Latinx teenagers with very diverse home lives. And I think this matters. I want teens to see themselves as not the best friend, not the spicy sidekick, and not the Latin lover, but as the center of the story.

Additionally, I wrote this book in 2019, when NXIVM was in the news and the election was everywhere. That had a huge influence, which ultimately led to the cult aspect in the book. The idea of “group think” was on my brain, people refusing to listen to reason or any viewpoints other than their own. I feel that’s a slippery slope that can lead to some dark places.

Lastly, completely divergent from the others, is more personal. I’ve sadly watched friends and family lose children, and the devastation that brings is unimaginable. This is one of the reasons grief plays such a heavy role in the book. People at their lowest points will do just about anything to stop that pain, or especially, stop that tragedy. But what exactly is anything? 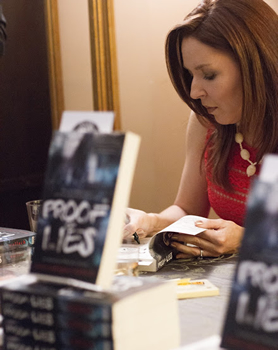 Rodriguez Wallach signs copies at the book launch party for her 2017 ITW Award-nominated YA novel Proof of Lies.

Given the subject matter, I imagine you did quite a bit of research. What was the most surprising thing you learned?

I did a lot of research—from exorcisms to cults to Satan worship to demonology. One of the Satanic murderous groups I used as inspiration, the Chicago Ripper Crew, had one of its killers released from prison at the exact time I was writing the novel, March 2019. And he’s only in his 50s. That was surprising. Also, I wasn’t aware of how common exorcisms are in some cultures. I watched a lot of documentaries on modern-day exorcism, and many look like a trip to the doctor. Also I learned that in 2015, a Catholic Cardinal performed an exorcism on the entire country of Mexico. This archbishop thought the whole nation needed to be rid of demons. That was surprising.

It’s been more than two years since our last chat. I just went back and re-read that interview, and you teased SMALL TOWN MONSTERS at the end! How did the book change since the draft you were writing then?

Wow, I just re-read the interview! I did tease SMALL TOWN MONSTERS! I’d say since then, the story widened significantly. It began just with Vera and Max trying to save his mom after evil is unleashed on their town. But then I wondered—if evil is spreading, why isn’t the entire town affected? So soon I was imagining what it might look like if all of Roaring Creek was possessed in some way—that led to the cult. Then I dug into what would lead people to be so desperate that they’d even think of joining a cult—that led to the grief angle. I then contemplated what would make an entire town grieve all at once—that led to a mass tragedy. And on and on it went until the final story became much more complex than my original outline from two years ago. But the heart is still there! 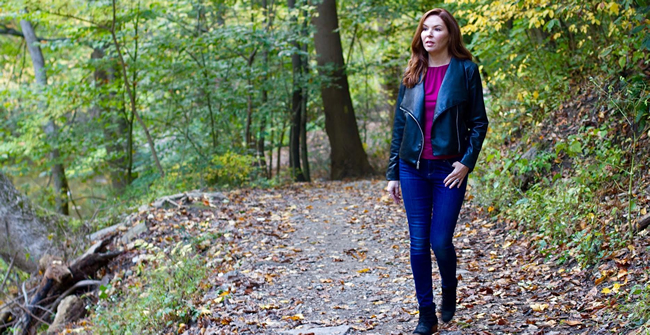 Rodriguez Wallach near her home in suburban Philadelphia.

SMALL TOWN MONSTERS found a home with Underlined, a new imprint from Delacorte that’s publishing fast-paced, high-concept YA horror and thrillers. How was the experience of joining the lineup of Underlined authors?

SMALL TOWN MONSTERS is my first book with a Big Five publisher. And as much as I love all of my other novels, and all of the houses that picked them up, I think every aspiring author dreams of being published by Random House. When I got the offer, I joked that I was being “called up to the big show.” And it does feel like that. I did a podcast recently where the interviewer asked if this was my first book. I had to awkwardly state that no, it’s my seventh published novel. I think that’s the biggest difference. My work is getting noticed now in a way that it wasn’t previously. And I’m enjoying every step in my publishing journey.

SMALL TOWN MONSTERS has a rich mythology, and it’s populated by memorable characters. Are there any plans for a follow-up?

I do have a skeleton outline for a potential follow-up. It’s not in the works yet, but it’s ready in case I want to go in that direction. We’ll see how readers react to Max and Vera!

It feels like a great time for horror fiction, both in the YA and adult markets. Any thoughts on why that might be?

You are so right! Horror is booming right now. But when I started the first draft, in 2019, it wasn’t as much. I think maybe I wasn’t the only person influenced by the election. That was an angry time in this country, and the news was so difficult to watch, I wouldn’t play it in front of my kids, because I felt it needed a “Mature Audience Only” warning. In retrospect, I think with an entire nation in a dark place, it makes sense that dark literature would sprout from it. 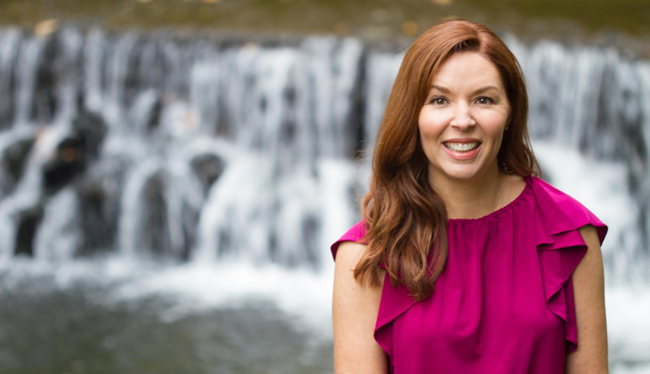 Another photo taken near the author’s suburban Philadelphia home

Can you tell me anything about what you’re working on next? Specifically, is there more horror in your future?

Yes! I am working on another horror novel! I’m in the middle of a book that mixes horror and technology—my version of Black Mirror. We all spent so much time with our devices in 2020, it would be hard not to be influenced by that. But I also have a few other horror ideas I’m kicking around, one based on an abandoned reform school near my house, and one based on famous historical murders, so I’m not sure where my brain will land in the end.

Finally, is there any news about your Anastasia Phoenix trilogy that you can share? News about a possible adaptation, perhaps?

There is some fun news! The Anastasia Phoenix series, of which book one, Proof of Lies, was nominated for the ITW YA award, has been optioned for film! Surprisingly, this happened during the pandemic. The producer’s goal is to turn it into a TV show, and I’ve even seen a rough script of a pilot episode. It has a long way to go before anything real happens, but it’s fun to just imagine a TV screen showing Anastasia running alongside the dark canals of Venice.