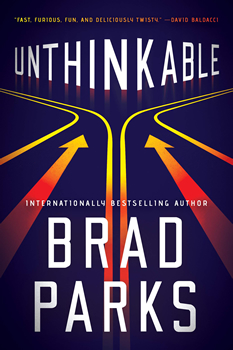 Brad Parks knows exactly when he realized he had a can’t-miss idea for his new novel, UNTHINKABLE. The premise is both incredibly epic and utterly personal: a man named Nate Lovejoy is visited by a member of a mysterious secret society and told he must kill his wife, an attorney, or a billion people will die.

At first Nate resists, but he wonders if what he’s been told is true: that his wife is about to set in motion a chain of events that will cost countless people their lives. And if so, is he really the only one who can stop it?

“When I first pitched this idea to the folks at Amazon Publishing, I was sitting with my editor and Gracie Doyle, who’s the director of Amazon Publishing,” Parks says. “I can remember as I was pitching the idea, Gracie kept coming back to, ‘Well, is he gonna kill his wife, you know?’ and we would go on and talk about something else. And then she’d be like, ‘No, no, wait, I gotta know. Is he gonna kill his wife?’ And you’re like, Okay, I think I’m onto something here.”

No spoilers, but as the novel unfolds, Parks turns up the heat on Nate, a stay-at-home dad dedicated to his wife and two children.

“I kind of loved giving a character two choices, both of which are horrific, and then he has to decide one,” he says. “That’s some good fun for me.”

A former attorney, Nate has spent the last few years changing diapers and navigating nap times, not going on missions to save humanity. After being drugged and kidnapped, he is told a story so outlandish it can’t be true: that a would-be prophet, the leader of a secret society called the Praesidium, has foreseen a future where the case Nate’s wife Jenny is litigating will lead to environmental disaster.

At first, Nate is skeptical. This prediction can’t possibly be true. In fact, Nate tries to gather intel on the Praesidium to prove that this is all some kind of hoax. But as evidence mounts showing they may be telling the truth, Nate tries to investigate on his own. Easier said than done for a stay-at-home dad.

“Let’s face it, being a stay-at-home parent of any kind adds 27 layers of difficulty to even the most mundane tasks, and so to present my character with those additional layers just struck me as a wonderfully terrible thing to do to him,” says Parks, a former stay-at-home dad himself.  “He is having to do the typical detective-type things that we have protagonists do in thrillers, but do it with one kid on his arm and another kid in the BabyBjörn.”

Even as Nate tries to juggle childcare and the truth about the people who kidnapped him, Jenny is going full speed ahead on a class action lawsuit against a pollution-spewing power company.  She knows it’s high stakes, but as a former high school basketball player, she’s used to competition and going her own way.

“Believe it or not, my first professional writing job was to cover girls’ basketball for my hometown paper, so I’ve always had this soft spot for girls’ and women’s basketball players,” Parks says. “I just wanted to make Jenny like some of the women I covered. Yeah, she is six feet tall, she still wears heels, and she can kick everyone’s butt.”

Even as Jenny becomes more and more committed to her clients, Nate tries to derail Jenny’s case. When the Praesidium gives Nate a gun, he starts to realize that he may really need to pull the trigger. “So you can’t make this choice easy, right?” Parks says. “No, no, you want to make it the worst choice imaginable.”

Nate’s dilemma becomes more and more impossible, leaving readers to wonder what he might do next. Which is what Parks, writing by the seat of his pants, was wondering too.  So did he have confidence in his ability to pull this off?

Ultimately, Parks tries to follow where the story takes him, “letting the character kind of meander along this path a little bit, not entirely knowing where they’re ultimately gonna end up. And I’ve grown more comfortable with that over the years.”

Getting deep inside his characters is a skill he’s honed on the page and on the stage, as an actor in community theater productions. “When I take on a role in the theater, I’m staying me, but becoming that person, right?” he says. “And that’s exactly the same thing I’m doing when I’m representing a protagonist. Obviously, I have no choice but to remain myself, but yeah, I’m playing a role. In both places, I’m playing a role.”

That’s not the only overlap between Parks the author and Parks the actor. “The other thing where there’s a corollary is I’m always thinking about the audience, and it’s the same thing when I’m acting,” he says. “It’s a little bit easier when you’re acting because the audience is right in front of you, so you can tell if they’re really enjoying this particular aspect of the portrayal of the character.”

That allows Parks to make adjustments in his performance. “It’s harder obviously with a reading audience, because you’re not sitting in front of them,” he says, although he imagines what it might be like. “’Why are you getting up to get a snack here? You can’t get up for a snack here, this is a good part!’ But I am thinking about the audience’s experience of it and trying to maximize their enjoyment.”

Parks knows that whether it’s for the head of Amazon Publishing or a first-time reader, his job is the same: to spin a story where people desperately want to know what happens next.

“One of my favorite reviews I’ve ever gotten is when Kirkus called this book ‘a textbook one-sitting read,’” he says. “Isn’t that what we’re trying to do? I’m trying to make sure you don’t want to get up from the book.”