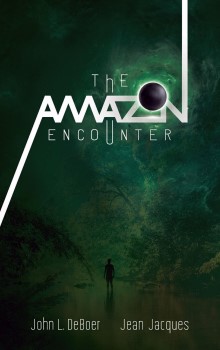 A shaman in the Amazon rainforest has a problem: children in his village are dying of an unknown ailment. When a large disc-shaped object falls from the sky onto a river bank, he enters the object through a gash in its wall.

A prominent Beverly Hills plastic surgeon is staying in the house of his pediatrician cousin, who is away for the weekend. He goes to sleep that night in the guest room and awakens the next morning lying on the ground in a jungle.

Thus begins a story of aliens, teleportation, and telepathy involving unwitting physicians, the Pentagon, international scientists, espionage agents, a Las Vegas gangster, and a psychic. A colorful cast of characters takes the reader on an exciting, and often amusing, journey from the Amazon jungle to southern California, and eventually to the NBC television studios in Manhattan. Side trips along the way include Moscow, Beijing, North Korea, Sao Paolo, Brazil, and the infamous Area 51 in Nevada.

John L. DeBoer and Jean Jacques recently spent some time with The Big Thrill discussing their thriller, THE AMAZON ENCOUNTER:

John: Agreeing on the direction the plot would go was the biggest challenge, since all communications between us was via email. The biggest opportunity in my view was presenting how normal people would react to contact with an alien race. It is my hope that when first contact occurs, it will involve altruistic aliens like those we portrayed in the book.

What authors have influenced you as a writer, and why?

John: Nelson DeMille, Michael Connelly, Scott Turow – for different reasons. I like the wiseass DeMille character, John Corey, because I can identify with him! The angst in Connelly’s leading characters gives a more human touch to protagonists. Turow, among others, has used a technique I often use in my books: first person for the protagonist, and third person for the other characters.

Jean: I co-authored my book for the first time was the biggest challenge.

Jean: The spaceship that crashed near a little village in the Amazon Rain Forest is empty, except for a Black Ball that levitate in the center. When you touch the Ball it can teleport anything you desire.

How does the book make a contribution to the genre?

Jean: I think it’s a new idea about teleportation.

Jean: I was in Shanghai and John was in North Carolina. the time difference was challenging.

After graduating from the University of Vermont College of Medicine, John L. DeBoer, M.D., F.A.C.S. completed a surgical residency in the U.S. Army and then spent three years in the Medical Corps as a general surgeon. Thirty years of private practice later, he retired to begin a new career as a writer. Dr. DeBoer is a member of International Thriller Writers and is the author of nine published novels. The father of two grown sons, he lives with his wife in North Carolina.

For more information about John and his work, please visit his website.

Jean Jacques wrote 2 novels, The Baby Factory. The second one, Bad Day for Harry Day one of the top 10 best thriller – P&E Readers Poll 2016. He co-authored a Sci-fi thriller with another award winning author. His writing was compared to Charles Bukowski – George Orwell – Quentin Tarantino and The Comedy Store in a 5 stars review on Amazon.

For more information about Jean and his work, please visit his Amazon page.