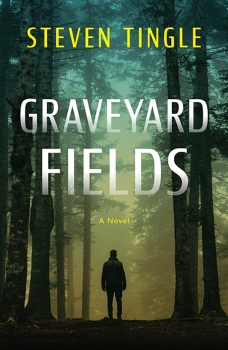 Davis Reed is plagued by the three “A’s”: anger, alcohol, and anxiety. A former Charleston police officer turned private detective, Davis hopes to gain some respect, self and otherwise, by writing a book. His subject: the true story of a B-25 bomber that crashed on Cold Mountain in western North Carolina just after the end of World War II.

From the comfort of a mountain cabin in Cruso, NC, Davis spends his days popping anti-anxiety pills, drinking copious amounts of home-brewed beer, and not writing a book. But when he discovers a set of keys on a mountain trail, he becomes curious, then obsessed, about finding the rightful owner. With the help of his friend Dale Johnson, a 275-pound local deputy who is full-time ornery and part-time clever, and Dale’s cousin Floppy, a motor-mouthed mechanic with a penchant for conspiracy theories and kleptomania, Davis works to uncover the mystery of the keys while navigating a world of small-town secrets, shady characters, ’80s heavy metal, and murder.

But Davis has his own secrets, and even though he’s escaped to the mountains, some bad business in Charleston is beginning to catch up with him. For an anxiety-riddled man looking for peace and quiet, Davis somehow stumbles into more chaos and crossfire than any amount of beer and pills can alleviate.

The setting came first since it’s the town where I was born and raised, Cruso, NC. Next came the characters, many of whom are composites of the interesting and occasionally bizarre folks who live in Cruso. The plot was the last part of the mix, which was probably not the most efficient way to write a novel.

I started writing GRAVEYARD FIELDS as an experiment. I’d been writing travel and food and drink pieces for magazines for a few years, and I wanted to see what it was like to write fiction. But I seriously doubted I’d ever finish it. I’m really good at starting things and then ditching them when they get to be too much work. So the challenge was writing a novel while still working full-time as a freelance writer.

The opportunity was to enter a new world. Writing the book has introduced me to other novelists who I now consider good friends.

GRAVEYARD FIELDS is a crime thriller, but it’s also absurdist and funny. The protagonist is an unreliable narrator who knows he’s unreliable. He’s a lazy, tipsy junkie who knows he’s a lazy, tipsy junkie. He’s also a detective who is not very interested in detecting anything. I think these things make the book a little different from most crime thrillers.

This is probably a little too personal, but the protagonist of the book is basically me. When I started writing GRAVEYARD FIELDS I was circling the drain in terms of alcohol, anxiety meds, and self-loathing. Writing the book was a way for me to work through those issues and express what I was dealing with but was keeping secret from my friends and family. It was like a self-guided intervention, and fortunately, it worked. Writing this book saved me from myself. I know that sounds a bit dramatic, but it’s true.

The masters of the genre: Chandler, Hammett, Leonard, Ross Macdonald, Michael Connelly, Harlan Coben, and John Sandford. But David Swinson has had the most impact on me. I loved his novel The Second Girl so much I wrote him a fan letter and mentioned that I was trying to write a crime novel. He wrote back and said he’d love to read the first few chapters. His support gave me the confidence to finish the book, and his advice and direction have helped shape me as a writer. I hope one day I’m in the position to help a first-time novelist the way David has helped me.

Steven Tingle is a South Carolina-based freelance writer, author, and journalist. In addition to having served as editor at large for Tempus, a luxury lifestyle publication for private jet owners, Steven contributes to a variety of national and regional publications including Robb Report, Modern Luxury, Town, Birmingham, and Discovery (Cathay Pacific’s in-flight magazine). A script Steven wrote detailing the early history of the South Carolina textile industry has been produced and will air on PBS in 2021. Steven’s debut novel, GRAVEYARD FIELDS, will be published by Crooked Lane Books and distributed by Penguin Random House in August of 2021.

Steven is a member of International Thriller Writers, The Authors Guild, and The Mystery Writers of America.