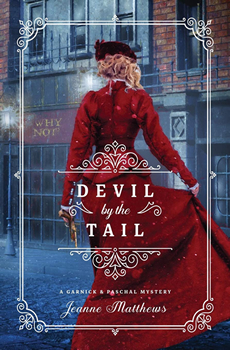 Historical intrigue is the name of the game in the latest thriller from author Jeanne Matthews.

In it, the audacious young widow of a Union soldier and an unvarnished ex-Confederate POW join forces to form a detective agency. Their most recent client stands accused of arson and murder. She may be innocent, but in 1867 Chicago, innocence is a matter of degree. Other suspects have compelling motives, and all have secrets. A sensationalist press, corrupt politicians, and a bevy of colorful bawdy house madams make the pursuit of truth a dangerous business.

The Big Thrill recently checked in with Matthews to learn more about this chilling new tale and the era in which it takes place.

When did you first take an interest in the post-Civil War era, and when did the idea for a novel related to the subject begin to take shape?

My grandfather’s given name was Gettysburg, and so, in a very personal way, I’ve been thinking about the Civil War all my life. My interest in writing about the events that followed the war began when I learned that an army of ethnic Irish veterans invaded Canada in 1866 with the idea of holding the territory hostage until England ceded control of Ireland. I’d never encountered that bit of history. I did some research and discovered that this radical Irish organization, the Fenian Brotherhood, had its roots in Chicago, a post-war boom town teeming with excitement—the opening of the Pinkerton Detective Agency, the closing of the largest POW camp in the North, the exponential growth of immigration and industry, the rise of political corruption, and the proliferation of hundreds of saloons, gambling dens, and notorious brothels. It was a time and a place that cried out for a novel. I’d ended my Dinah Pelerin travel mystery series a few years before and decided to try my hand at a different kind of travel—to a previous century.

Tell us about your main characters. What are their lives like at the time the story takes place?

In 1867, Quinn Sinclair is the 22-year-old widow of a Union soldier who died intestate, leaving her to live on the sufferance of her condescending in-laws. After a brief stint in the female bureau of the Pinkerton Agency, she has solved the murder of her Fenian father with the help of Gabriel Garnick, a Confederate POW who stayed in Chicago following his release from prison. His wife died in Tennessee while he was interned. He had no one to go home to and a lingering case of what today we call post-traumatic stress. Quinn is determined to become independent for the first time in her life, and with her success in discovering the identity of her father’s murderer, she has developed a craving for adventure. She enlists Garnick to join with her and start their own detective agency. It’s a bold decision for the time, and there are social consequences. Except for nurses, nice women didn’t work outside the home. To maintain a vestige of respectability, Quinn adopts the alias “Mrs. Paschal” for professional use and, although she and Garnick are equal partners, he acts as frontman for Garnick & Paschal in order to lend the new business credibility. Quinn’s goals and desires are much the same as those of modern women—the freedom to live as she chooses. Laws of the 19th century made that a complicated proposition. When her relationship with Garnick begins to heat up, the partners find themselves at cross purposes.

How did you go about conducting your research?  Did you encounter any challenges when reviewing this period in history?

Of course I read a lot about the period.  It’s amazing how many words and idioms used in everyday conversation 150 years ago would sound quaint if not downright puzzling to modern ears. The war had a big impact on the language. “To see the elephant” was a period metaphor for going into battle. The “forlorn hope” was the man chosen to lead the charge. It was challenging to give a flavor of the vernacular without overdoing it. Likewise, I had to be careful not to slip in the occasional anachronism or contemporary expression. Another challenge was the fact that Chicago was almost totally destroyed by fire in 1871. Many of the sources I consulted described streets and features of the rebuilt city. Perhaps it’s a blessing in disguise and I won’t receive a lot of complaints about geographical errors. The biggest challenge was resisting the temptation to lard in too much history. First and foremost, DEVIL BY THE TAIL is a murder mystery—secrets, lies, and dangerous twists.

What elements do you feel are essential for a good historical thriller?

A good story, regardless of the era, has to grab the reader by the collar and yank him or her straight into the characters’ lives and circumstances. The historical details should seem so real and natural that they don’t stand out for their strangeness. This is the way things work, the way people talk, the way the culture operates.  Get on with the plot.  It’s how the characters react to the trouble we writers throw at them that creates the action and provides the thrills.

If you could travel back in time to the time and place this story occurs, would you?

Frankly, I’d be scared to go back to 1867 Chicago. The germ theory of disease hadn’t yet been accepted. Epidemics of cholera and typhoid periodically ravaged the city. Blood and entrails from the slaughterhouses and stockyards were routinely dumped in the Chicago River, and the water literally bubbled from methane and carbonic gases. Dyes and chemicals from other factories polluted the rivers, and sewage was emptied directly into Lake Michigan, where the citizens got their drinking water. A foul stench enveloped the city. House fires were common, crime was rampant, and married women lived under the law of coverture, their individual rights surrendered to their husbands. Still and all, it was a time when great advances were being made, and women with spirit and high aspirations—nervy, unconventional women like future presidential candidate Victoria Woodhull and Detective Quinn Paschal—moved the country in the direction of equality.

Matthews graduated from the University of Georgia with a degree in journalism. She has worked as a copywriter, an English and drama teacher, and a paralegal. It was while working for lawyers that she developed a keen interest in murder. She lives in Washington State with her husband and a Norwich terrier named Jack Reacher.