Taking on a Charming Dog’s Life 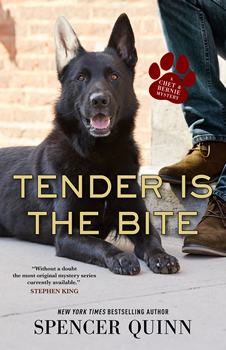 Peter Abrahams’s first dog was a pretty little golden retriever named Bailey. She liked to trot alongside the author during his jogs and always knew when the traffic light turned green. Bailey was the apple of Abrahams’s eye, so it’s no surprise dogs started working their way into his novels. But when his wife suggested he center a novel on a dog, Abrahams went full throttle into “a dog’s life.” He created the pen name Spencer Quinn, and the lovable Chet was born.

Like Bailey, Chet’s a smart, obedient sidekick, but unlike Bailey, he’s a dark alert boy. With his human private-eye owner Bernie, he’s always on the move, always finding bad guys, and even better, the occasional beef jerky stick. Though Abrahams himself has never worked in law enforcement or made a life as a criminal (thank goodness), he’s still managed to publish 11 books starring this crime fiction duo. They’ve sniffed out clues in the dry desert, bayou swamps, and buttoned-up Washington, DC, making for twisty, suspenseful stories that are not-quite-cozy but laugh-out-loud funny.

Abrahams has also written serious thrillers like Oblivion and The Fan, a children’s mystery series (Echo Falls Mysteries), and even an Edgar Award-winning young adult novel, Reality Check. He’s the kind of writer who, with dozens of books to his name, shows that taking things lightly may be the key to a long career.

The Big Thrill talked with him about Chet and Bernie’s latest adventure, TENDER IS THE BITE, politics as inspiration, and how he maintains a blog in a dog’s voice.

In TENDER IS THE BITE, Bernie and Chet are back on the case. This time they’re searching for two missing women during a political election season. What was the inspiration for the story? Was last year’s election on your mind?

Politics in general, more than any particular election. The scene where the two neighbors of Chet and Bernie on either side are pounding opposing signs into their yards and glaring at each other was where I began, thematically. Chet and Bernie—and so many like them—are in the middle, being squeezed by forces that maybe are somewhat uncaring at root. Working the case, they will begin to understand those forces more and more.

I had a brilliant dog who bore a striking resemblance to Chet: a big black alert male shepherd. He was the smartest dog I ever had, full of strength, wild vigor, and sharp intelligence. Was there a real-life dog you shaped Chet after?

Well, Chet’s actually a mix of some sort. All we know about his appearance is what he hears people say in front of him. He’s a hundred-plus pounder, and his ears don’t match, one black, one white. There’s no real-life dog, but I never could have written the character of Chet without having dogs in my life. These days there’s only Pearl, lounging on the couch in my office, watching me write. When she gets up, it’s walk time.

Chet’s voice perfectly reflects not only his breed’s energy but Chet’s (and maybe all dogs’) uniquely optimistic outlook. Plus, he’s quick to forget stuff cuz all dogs do! How did you nail that voice? Did you journal in his voice?

The voice just came to me. I’d like to provide a fancy-pants answer full of inside-baseball stuff about writing techniques, but it would be a lie.

I usually start the day taking care of social media, not too often in Chet’s voice. It doesn’t take long, and readers often send in ideas. In addition, there are regular events. Every Sunday, for example, we do beginnings, taking a look at the start of a Peter Abrahams novel, including the Chet and Bernies. Then there’s the Friend of the Month contest. Readers send in pictures to Chet’s FB page—doesn’t have to be a dog, there are cats, too, plus gerbils and even a stuffed animal or two—and the random number generator picks the winner, who becomes the profile pic for the month, the human companion getting a signed copy of the latest C&B novel. And there are other topics that pop up—canine nephelococcygia being quite popular recently.

A dog’s voice isn’t the only persona you take on. With adult thrillers, mysteries for middle grade readers, and the Chet and Bernie series, you demonstrate how versatile your talents are. How do you approach the various genres?

First, out of the blue, comes an idea for a story. I try to ignore it, push it away. If it comes back, starts to take shape on its own—while I’m on a bike ride, for example—I start to take it seriously. If the material is kind of dark—as in Oblivion, say, or A Perfect Crime—then the writing part of me just sort of gears up for that. In the case of Chet and Bernie—where there is some darkness, the novels not being cozies—I get to play just about all 88 keys.

There’s so much humor when you write as Spencer Quinn. Do you have as much fun writing the stories as we have reading them?

Here’s something embarrassing, so don’t let on. When I’m going over the first draft and have therefore had time to forget a detail or two, I sometimes laugh out loud. But you didn’t hear it from me.

Along those lines, what’s your secret to writing humor? Are there any humor writers that you’ve learned from?

I really have no method for this—but some intellectual readers have pointed me to the Russian literary theorist Viktor Shklovsky and his theory of defamiliarization. (You will not find his actual writing very funny.)

Bernie and Chet live in a desert “Valley” area, which seems to be Phoenix, Arizona. This makes for a lot of natural sights and sounds for Chet’s senses. Also, it’s full of gold ole grizzled desert history. What’s your experience with Arizona? Have you lived there?

Never lived there but spent a lot of time. The western desert has a way of acting on my imagination.

I see the next book, It’s a Wonderful Woof, looks like a Christmas novel. Can you give us a preview of what’s to come for Bernie and Chet?

Let’s just say that buried deep in the desert, so deep that only one certain character could sniff it out, is an old relic that reveals the spirit of Christmas.

What advice do you have for “newbie” authors who may only have a couple books published?

Somehow be super-confident without being a blockhead.