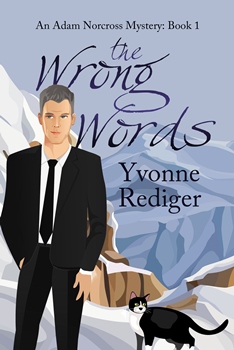 Adam Norcross recently buried his mother. His boss, Shapiro, interrupts Norcross’s bereavement to give him an assignment: find out how the country’s most eminent climate scientist ended up dead in a mountain ravine. Sergeant Bethany Leith is not thrilled to have Norcross stepping on her toes. Was it an accident or suicide? Norcross’ unique precognitive ability tells him it’s something else, something darker.

The characters of Adam Norcross and Sergeant Bethany Leith came first. Followed closely by the plot, which kept me awake at night until I had an outline shaped.

The biggest challenge for this book was the research. The police procedures, thanks to the local Detachment for that, and the EMT/Rescue procedures. Thanks to my son-in-law for his input. My science contacts for the explanations with regard to weather.

THE WRONG WORDS, or lies, if you like, is a combination of cozy mystery and police procedural. It touches on family and who we are. The story also has the tiniest element of romance. So there is more than one storyline going on. Some threads will continue into the next books.

The buddy story. That a female and male of roughly the same age could work together without sexual tension getting in the way. That comes later in the series, after the characters get to know each other.

Norcross has an unusual job. His work is not completely explained in this first book. Nor do we know who his father is; that comes later.

Q: What is coming next for Norcross and Leith?

A: Leith is called home to the family farm. Archeologists have been digging in one of her dad’s pastures and found something no one ever expected: a body. Norcross is sent to uncover who and why anyone would murder the lead archeologist, let alone Leith’s father.

Yvonne Rediger was born in Saskatchewan, lived and worked in northern Manitoba, Alberta, New Brunswick, and Vancouver Island, British Columbia. She currently writes from her home in rural Saskatchewan.

Yvonne has been writing since she was in her teens. Her favorite genres are Mystery, Urban Fantasy, Paranormal, and Romance. Each with a bit of humor.

She is member of the Saskatchewan Writers Guild, Saskatchewan Romance Writers, and International Thriller Writers. Yvonne is married to her scuba diving buddy, who is also her sailboat captain. She has two children.