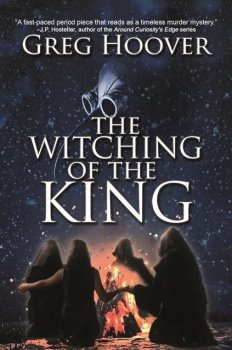 England 1604. At a remote palace in the dead of winter, William Shakespeare and his acting company are invited to perform for King James. When a killer tries to assassinate the king, a priest is murdered by mistake. Feeling he can trust no one inside the palace, King James appoints William Shakespeare to solve the mystery and bring the killer to justice. But when Shakespeare’s daughter is arrested for witchcraft, the investigation becomes personal.

Greg Hoover recently spent some time with The Big Thrill discussing his debut thriller, THE WITCHING OF THE KING:

Character and setting. When I learned that William Shakespeare was at the famous Hampton Court Conference, my imagination created a murder mystery, and a novel was born. 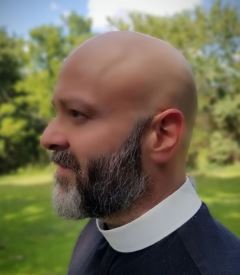 Learning all the historical details was challenging in the best sense of the word. And the greatest opportunity was to then let some of the facts go and allow pure imagination to take over.

It liberates Shakespeare from stuffy history and plunges him into a supernatural thriller.

I love the writing of C.J. Sansom. His historical mysteries are among the best ever written.

Greg Hoover, an award-winning writer, has been an actor, playwright, therapist, and priest. He and his wife have four children and live surrounded by nature in their country home. Greg loves the outdoors, hiking, exploring, traveling, and playing guitar. THE WITCHING OF THE KING is his debut novel.

For more about the author and his work, please visit his website.