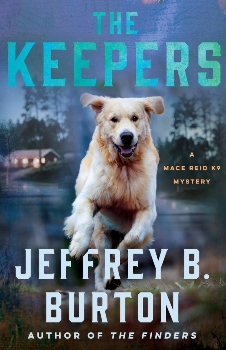 Mason “Mace” Reid lives on the outskirts of Chicago and specializes in human remains detection—that is, he trains dogs to hunt for dead bodies. He calls his pack of cadaver dogs The Finders, and his prize pupil is a golden retriever named Vira.

When Mace Reid and Vira are called in to search Washington Park at three o’clock in the morning, what they find has them running for their very lives. The trail of murder and mayhem Mace and CPD Officer Kippy Gimm have been following leads them to uncover treachery and corruption at the highest level, and their discoveries do not bode well for them . . . nor for the Windy City itself.

Jeffrey Burton recently spent some time with The Big Thrill discussing his latest thriller, THE KEEPERS:

I caught a blurb on the radio about a sheriff’s department bringing in human remains detection dogs to search for a person who’d gone missing and was presumed dead. It got me thinking about what kind of adventures a dog handler and his very special cadaver dog could get into and, hopefully, out of. So the characters took shape first.

I am a research geek, so after a ton of googling on human remains detection dogs, I wanted to give readers a taste of what their job involves as well as what goes into their training. But I needed to pepper this throughout the novel so not to bore the reader or bring the book to a screeching halt with some ten page essay. Friends have asked if I could train their dogs to sniff out narcotics or explosives or cancer or cadavers, but I lack Mace Reid’s patience. I tell them that when they came to pick up their dogs, they’d find their pets five pounds heavier and spoiled rotten.

Although I live in the Twin Cities (Minneapolis/St. Paul), the novel takes place in Chicago, and I did my best to make the Windy City a character in and of itself. I’d always piggy back on my wife’s trade shows in downtown Chicago—get a free hotel room, gobble up some of her per diem food. She’d have to work while I got to poke about the city. Anyway, I have several author friends from Chicago and, hopefully, I will have done them proud.

THE KEEPERS is book two in Burton’s Finders series (The Finders came out in 2020). Novels in Burton’s Agent Drew Cady mystery series include The Chessman, The Lynchpin, and The Eulogist. Burton’s short stories have appeared in dozens of magazines. His short story Liza appeared in The Twisted Book of Shadows, which won the 2019 Shirley Jackson Award for Edited Anthology. Burton is a member of the Mystery Writers of America, International Thriller Writers, and the Horror Writers Association. He was born in Long Beach, California, grew up in St. Paul, Minnesota, and received his BA in Journalism at the University of Minnesota. He lives in St. Paul with his wife, Cindy, an irate Pomeranian named Lucy, and a goofball of a Beagle named Milo.