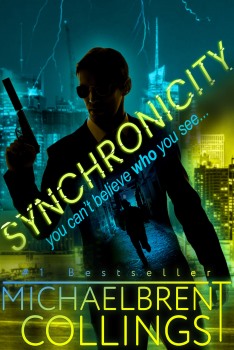 Tyler “Book” Malcolm has lived a life on the run. Off the grid, out of sight of the authorities. Hoping to escape a terrifying secret, to outrun what he has seen and what he has done.

Kane is an assassin who, with the help of the Machine, possesses the ability to assume the identity of anyone he wishes. He can strike without warning and kill without mercy. Stronger than a dozen men, faster than sight itself, he can be anywhere, anytime.

When Book catches Kane’s eye, he discovers the world is even more dangerous than he knew. Now, Book must ally himself with people who, like him, know that Kane is on the verge of remaking the world in his image.

But how do you know who to trust when the man who wants you dead can be anyone he pleases?

How can you fight for the ones you love…

…when you can’t even believe who you see?

Plot and character with me always grow up at the same time. In this case, I had an idea about an assassin who could take over other people’s bodies, then use those people to murder or commit atrocities. As I thought about that, I had to ask what kind of person would be attracted to that power (the antagonist), and what kind of person would be LEAST likely to want to go up against it (the protagonist). The story started out as a fast-moving thriller with a sci-fi twist—and hopefully it still is—but as the plot and characters wove together, the whole of it turned into a bit of a rumination on what it takes to connect as humans, and how tenuous those connections are in today’s world. 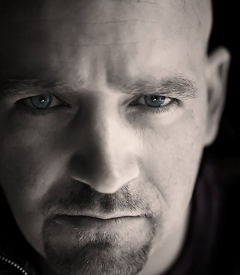 The biggest challenge was trying to keep a fantastical idea grounded and keep it clear. The machine at the heart of the problems—the SINC—allows psychics to project their consciousness into others’ bodies. But the rules for it had to be clear, reasonably simple, and explainable without an overwhelming infodump. Coming up with ways to show the SINC’s effects without explaining them—allowing the audience to discover what the machine does right alongside our protagonist, Book—was tremendously difficult at times. But also rewarding and fun.

First and foremost, my books aim to entertain. The world is a hefty, heady mix of anxiety, fear, and confusion for a lot of people. I hope that with my stories I can take people out of that moment and allow them to subsume their own cares in the imaginary adventures of people who live life in extreme duress.

At the same time, I hope that people reading this book will also think about what it takes to make someone a human: that we are more than the gizmos and gadgets we rely upon, and that the most powerful forces are, inevitably, wrought by simple human cooperation.

One of the fun parts of the plot is that each time someone uses the SINC, their physical strength and speed increase. That said, I wanted to do something I don’t think I’ve ever seen: I wanted the super strength to hurt. The heroes and villains in the book can punch through a brick wall if they want… but they’ll shatter every bone in their hand and arm doing it. Finding a way to inject a fantastic element while still making it exist in a world of physical reality (i.e., bones lose to bricks) was a lot of fun and made for some very interesting fight scenes.

This is about as straight a thriller as I’ve ever written. Most of my work straddles a bunch of genres. With this one, I really focused on having a popcorn movie playing out in your head, watching the hero kick butt and take names.

One of the most versatile writers around, Michaelbrent Collings is an internationally bestselling novelist and produced screenwriter. While he is best known for horror (and is one of the most successful indie horror authors in the United States), he has also written bestselling thriller, fantasy, science fiction, mystery, humor, young adult, and middle grade works, and Western Romance.

Michaelbrent has also received critical acclaim: he is the only person who has ever been a finalist for a Bram Stoker Award, a Dragon Award, a RONE Award, and a Whitney award, and he was recently voted one of the Top 100 Greatest All Time Horror Writers out of over 150,000 votes cast on Ranker.com.