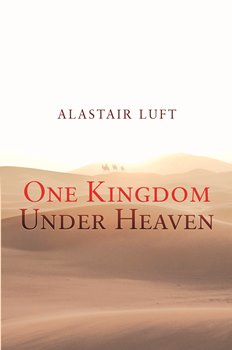 In the year 2029, China attacks the United States. Retired Navy SEAL Malcolm Kwong survives the attack. His family does not. Vowing revenge, Kwong puts together a team to help him kill the president of China and leads them into China’s Taklamakan Desert—the Desert of Death—in search of Ismail Khoja, a Uighur who nearly assassinated the Chinese president five years earlier. Together, they will either prevent a world war or start one.

Alastair Luft recently spent some time with The Big Thrill discussing his latest thriller, ONE KINGDOM UNDER HEAVEN:

The plot absolutely took shape first, and while the structure evolved from a linear to nonlinear narrative, the fundamental sequence of events remained much the same. The characters might have taken shape next, particularly Malcolm Kwong and Zhao Guoqiang, then Ismail Khoja, and the rest of the supporting characters after that. The large role that the Taklamakan Desert plays in the story was also there from the beginning; however, much of the setting outside that evolved over time.

This book looks at the same story from different perspectives, and there is also a degree of unreliable narration. Because of that, it was very challenging to keep the narrative of each character consistent with their changing motivations and awareness of overall events. The biggest opportunity this book presented was to be able to explore minimalism. I tend to overwrite, so ONE KINGDOM UNDER HEAVEN was a chance to force myself to be selective about word choice. I even have a completed manuscript without any quotation marks, which I prefer from an artistic standpoint, even though the published version is more accessible.

ONE KINGDON UNDER HEAVEN was heavily influenced by Cormac McCarthy’s The Road and No Country for Old Men. Due to these and other minimalist books, there are major events treated in a cursory manner in ONE KINGDON UNDER HEAVEN, like the Chinese attack on the United States. There are also echoes of Brian Francis Slattery in One Kingdom, such as the almost wuxia descriptions of fight scenes that are in Liberation: Being the Adventures of the Slick Six After the Collapse of the United States of America.

Alastair Luft writes out of Ottawa, Ontario, Canada, where he lives with his wife and two daughters. He is the author of two other novels: The Battle Within and Jihadi Bride, which was a finalist in the 2020 ITW Thriller Awards. A 25-year veteran of the Canadian Armed Forces, Alastair is also an accomplished speaker who has given TEDx talks on how violence begets violence and the importance of art.