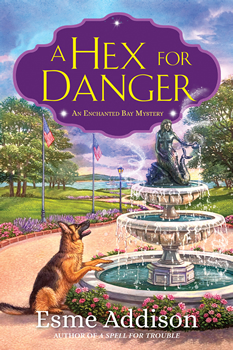 Growing up in Raleigh, North Carolina, Esme Addison had access to her father’s collection of beautifully bound classic books. In elementary and middle school, she read Shakespeare, Aesop’s Fables, Grimm’s Fairy Tales, One Thousand and One Nights, James Fenimore Cooper, and many more. She was enthralled by Edgar Allan Poe and the Nancy Drew series, and in college she discovered Flannery O’Connor, Alice Walker, and Zora Neale Hurston.

Each of these writers has inspired and shaped her as an author. But asked what one book changed her life, her answer is unequivocal: S. E. Hinton’s The Outsiders.

“When I discovered she’d written the book as a teenager and gotten it published, it made me realize that I could become a published author too,” she says.

Her father was one of her most supportive cheerleaders. When she told him about Hinton and her accomplishments, he encouraged her to publish her first novel while still in high school. Although she didn’t achieve publication then, she did write several novels during that time.

“I walked around with a huge binder filled with handwritten manuscripts,” she says. “And I’d write and rewrite just for myself. Because writing was fun and enjoyable and I loved the practice of writing fiction. Reading S. E. Hinton’s The Outsiders planted the seed in my mind that I could be and would be a published author one day.”

In fact, Addison has written short stories, poetry, and novels since she was a child. “I’ve written in many different genres,” she says. “YA, chicklit, romantic fantasy, romantic suspense, and historical fiction before I buckled down and tried to get a book deal for a mystery. It’s just the book and genre that came out first—but I really love mysteries. It’s an intellectual challenge: creating the plot, the puzzle, trying to stump the reader… Creating a successful mystery is a very satisfying experience for me.”

Her most recent novel, A HEX FOR DANGER, is a sequel to A Spell for Trouble, book one of the Enchanted Bay series. This second book begins to delve more deeply into the characters, their world, and the overarching mysteries that span the series. Asked to share a bit about the book, Addison says, “The main character, Alex Sobieski, is settling into her new home and community and getting comfortable with her role in the family and also with her magical heritage. It’s summer and she’s helping to plan the annual mermaid festival, when she meets someone involved with the festival who has information about her family and background. That information also comes with an inherent warning.”

A HEX FOR DANGER was inspired by the legend of the Mermaid of Warsaw, a tale that spoke to Addison on several levels.

“Who doesn’t love mermaids, right?” she says. “Mystical creatures, mythological stories resonate with a part of us that wants to believe there is magic in the world and that fantasy is reality. I love the story of the Mermaid of Warsaw in particular because she’s always depicted with a sword and shield. She’s a strong, fantastical creature who was both feminine yet strong and protective, with a warrior’s spirit. That’s an interesting dichotomy. When I read her story, I wanted to imagine a backstory for her. How did she come to be? Did she have a family? If so, where are they now? What are they doing?”

A common theme in Addison’s writing is the interrelation between magic and science. As she constructed her world, she would ask, “What are they? Are they the same? Are they different? Where are the lines blurred? Technology today would be viewed as magic to past generations. So what does that say about magic? Is it fantasy or just unexplained technology and ideas? What would someone from the 1400s think about a television? Would they think it was magic, wonder how people got into a box and are moving around and talking? It’s all very interesting, right? So I like to do that with myths and magic. When is it science? And exploring those ideas in a cozy mystery is just fun.”

Addison does a lot of research for her worldbuilding.

“I try to base everything I write on reality,” she says. “Or find a real explanation for things that seem impossible. For example, scientifically speaking, how could a mermaid come to be? It would have to be a human modified with fish DNA, right? Or something like that. And that’s not magic. That’s science. So I look at the magical facts of the story and try to build a realistic world around it.”

She knew from the beginning she was writing a series. “I think most cozy mysteries are conceived as series,” she says. “It’s really a convention of the genre that the idea be a series with an amateur sleuth who is constantly finding and solving mysteries. So A Spell for Trouble was conceived as the first book in a series. I think the first book is really different from the rest of the series in that it’s introducing characters and concepts and a bit of backstory, but in a way that’s well-paced and light—an introduction to a series that will become more complex as the series goes on. More a message to readers: Hey, do you think you’d like to read a mystery about women descended from mermaids? If so, read this book and then keep going. It’s going to be a wild ride!”

And a wild ride it is. Addison’s books are a charming blend of mystery, magic, and romance. In A HEX FOR DANGER, Alex is torn between Jack—a solid, dependable conformist and Dylan—charismatic, enigmatic, unpredictable…and surprisingly vulnerable. Alex’s attraction to both men creates tension in the story, but it also adds thematic depth, reflecting and challenging the main character’s moral and emotional conflicts.

“I think these men represent the two sides of Alex. And her two parents. Her father was a by-the-book policeman who prioritized law and order and eschewed talk of magic and fantasy,” Addison says. “While her mother was the opposite. Magical. Complex, secretive… Alex has always thought she was one thing—and like her father. Now she knows there is more to her, and she’ll have to figure out which man is the best complement for her.”

With three young boys and a full-time job, Addison doesn’t have a typical writing day. Instead, she writes in spurts—preferably in six-hour blocks.

“I just set time aside, let my children know I’m working, and ask them to try and limit the distractions,” she says. “But sometimes I just fit in a few hours here and there. Lots gets done on the weekends. I’ll wake up and write from about seven a.m. to one or three p.m.”

Because she doesn’t have a lot of time, she tries to write fast, finishing a first draft in about four weeks so she can move on to other things—like doing Zumba and spending quality time with her family. But she writes before work and sometimes at night before bed. “At this point,” she says, “it’s just second nature to write when I can. But it requires a balancing act to get everything done.”

It’s a busy life. Asked what’s next, Addison says, “I’m working on book three in the series, and also a new mystery series—and a standalone.”

Naturally, she hopes her audience will find her series an entertaining read. But she has a greater hope as well—that her readers will look at their own world and question what is possible and believable in their own realities.

Between the Lines: S.A. Cosby