Making the Story Earn It 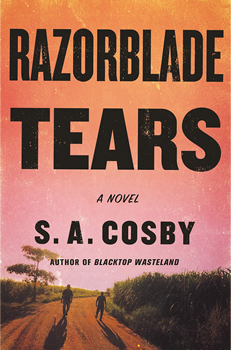 Though he’s been picking away at short stories since the tender age of 12, S.A. Cosby recalls the exact moment he received what remains today his greatest piece of writing advice. During a Grade 11 English class, he raised his hand and asked, “What am I allowed to write about?”

The teacher called him aside afterward and imparted this infinite wisdom: “You can write about whatever you want, as long as your story earns it.”

These empowering words have carried Cosby throughout his formative writing years, allowing him to write about topics that need addressing—even if that means making readers a little uncomfortable.

Though not his first book, Cosby skidded onto the bestseller list with last year’s Blacktop Wasteland, a high-octane heist thriller that earned him critical acclaim and made the book industry stand up and take notice. With his lyrical, yet unflinchingly raw style, Cosby tackled heavy topics with fleshed-out characters that stick with you long after you turn the last page.

It’s no surprise Blacktop Wasteland earned the Southern writer numerous awards and nominations—he is up for this year’s ITW Hardcover Award—accolades, movie deals, and a firm spot on the crime fiction circuit.

And perhaps even less surprising that this year’s follow-up, RAZORBLADE TEARS, is primed to exceed Blacktop Wasteland’s exceedingly high bar of success.

Boiled down to its simplest form, RAZORBLADE TEARS is the story of a Black man, a white man, their two murdered sons—and their quest for vengeance. But of course, it’s so much more than that. Provocative, lyrical, and propulsive, it’s a novel of bloody retribution, heartfelt change—and maybe even redemption.

In his first interview with The Big Thrill, Cosby shares more about the inspiration for this book and its memorable characters, what drives his passion to create, and the writing quirk that makes the most appearances in his work.

RAZORBLADE TEARS provides an unflinching look at a number of big topics—racism, vengeance, hatred… The list is long and in someone else’s hands could have been unwieldy. What do you want readers to take away from this story?

Much of that intolerance—and its consequences—is addressed through the characters of Ike and Buddy Lee—two fairly unlikeable guys on the surface who are vastly different but share a common grief: the loss of their sons, who were married and murdered. Can you share a little about their inception?

The idea for the book came from two places. The first was that I was talking to my friend, who is the same age as me—I’ll be 48 this year—who for the longest time wouldn’t come out to his family. When he did come out, it didn’t go well. And I was very moved and saddened by his story—as an African American, he’d been raised in a family that talked a lot about equality. But that didn’t seem to extend to him as a gay man.

I was also having this conversation with a friend about these two tough-guy actors—Ron Perlman and Danny Trejo—and I thought, I’d love to write a story about these guys, these old guys that used to be hellcats.

Both Ike and Buddy Lee didn’t understand who their sons were. I always wanted people to confront them about their beliefs. That’s the way we have to have these conversations. We have to call people on their BS. Redemption is a constant work in progress. For the purposes of the book, it ends on page 308—but in reality, that’s only the beginning.

Despite the heaviness of the topics, the writing is still nuanced—you’re not hitting us over the head with a sledgehammer. Is that nuance something that takes several drafts?

Oh, yeah, that takes several drafts. I want the subtext to be nuanced. So, while you’re looking over here at someone getting their head bashed in with a shovel, I don’t want you to learn that you’re caring about these characters.

If you can believe it, the first two drafts were way darker. I feel strongly about the issues I’m talking about, but sometimes I can get carried away. There were a couple of hardcore scenes in the first draft, and I had to learn that I don’t necessarily need those scenes to get across what I’m trying to say.

I read in an interview about Blacktop Wasteland that when you wrote the scene between Ronnie and Bug in the cornfield, that was the moment you thought you might have something really good on your hands. RAZORBLADE TEARS bleeds with exceptional scenes, but is there one for you that stands out?

Yeah, there’s the scene in the gay bar where Ike acts out because someone has hit on him, and his reactions afterward. He has a sense of shame internally—and in his internal monologue he sees the way he has carried himself at the expense of other people. It was then that I thought maybe I was getting what I wanted out of the story.

Both Blacktop Wasteland and RAZORBLADE TEARS are violent books—there’s a lot of blood and death. And yet it’s never gratuitous. How do you strike the balance of being authentic to the story while not turning readers off with “too much”?

I appreciate the visceral-ness of violence. I think pain and violence is universal. Even if you’ve never been in a fist fight, you can appreciate how things spiral out of control. If your story earns that violence, you gain currency with your reader, and you get to use that currency when you need it. I really like shocking readers into being engaged in the story. Violence is ugly and messy. I want you to feel the bones splitting and feel the sweat and agony they’re going through. I don’t do sedate. I want to shove your face in it.

Blacktop Wasteland is a staggeringly good novel—it received outstanding trade reviews, a movie deal, multiple awards. Many authors struggle with the next book after this kind of debut success. Was this a factor for you?

I think I had a lot of concern about following Blacktop Wasteland. I didn’t expect the book to do the things it did at all. There was a moment I realized it was getting bigger than I had ever dreamed. It was terrifying in some ways. For all the subtext, it’s a heist novel. RAZORBLADE TEARS slows down a lot in parts—I needed to give my characters time to breathe. And I guess a part of me worries people won’t connect with it. But the only way out is through, and so I just pray and hope for the best.

My job is to tell a good story and make people think. Nobody wants a 300-page sermon. I did what I wanted to do with RAZORBLADE TEARS. Will people appreciate it? I hope so.

Your prose is mesmerizing. Could you share a little about your writing process?

I love listening to music—it inspires me. I’m a huge fan of all genres. And I love to read. I do tend to skew a bit toward the purplish, but I have a great editor who’s able to pull me back when I get carried away. I do think that has something to do with being a Southern writer though. There’s a certain rhythm to Southern speech that if you can replicate it in fiction, it sets you apart from other writers.

Also, I’m addicted to similes. If you read my book and you think there are too many similes, you should have seen the first draft.

I think I did, I just didn’t know it. I grew up around readers. My mom was a great reader of folklore and biographies. My grandmother loved trashy romance authors. The trashier the better. My uncle loved mysteries.

I started to read at a young age—my mom used to tell people I started reading at four, but I think that’s a family legend. At one point, I started complaining about some of the stories, that I didn’t like the way they ended. And my mom would say, “If you don’t like the way a story ends, write your own.” I used to think that was her encouraging me, but I think she was tired of me talking about it.

I was about 12 or 13 when I started to write my first story. It was an over-the-top werewolf story. And I liked the feeling of completing a story. I knew it was horrible, but now I had the bug.

My mom was a realist about writing—she always told me to have something as back-up. But she never told me I couldn’t do it. She would always bring home books for me, paperbacks she got from a used book store, and I would read everything.

I had to drop out of college because my mom was sick, and that’s when I started writing seriously. I bought a bunch of books on writing craft. I really wanted to write horror, but basically, I couldn’t sell it. I realized that even most of my horror stuff had a crime/noir feel to it. That’s where I found my lane.

There are actually two secret projects. It’s a whole thing. What I will say is that I’m writing in a different medium for one, and a different genre for the other, which is both challenging and also very rewarding.

On the Cover: Esme Addison