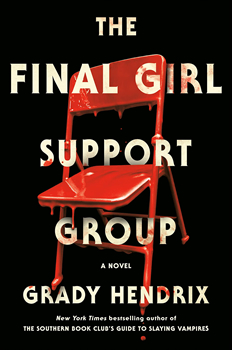 In Grady Hendrix’s new novel, six women who survived horrific attacks in their teens gather every month to commiserate in the basement of a Los Angeles-area church. They’ve been meeting for 16 years, but lately the ties that bind them have begun to fray, and long-simmering resentments and infighting threaten to break up the group. That’s unfortunate, because the women are about to endure their deadliest ordeal yet. They’ll need to work together to survive, even as an unknown enemy sets out to drive bloody wedges between them (and murder them all in the process).

These women are all “final girls”—survivors of crimes so spectacularly gruesome and stunningly cruel that, in Hendrix’s inspired world-building, they became the basis for slasher-movie franchises throughout the 1980s and ’90s. Even casual genre fans will recognize some of the characters as analogs of such horror icons as Halloween’s Laurie Strode and Scream’s Sidney Prescott; others, like Hendrix’s main character, Lynette Tarkington, are summoned up from the deeper well of cult genre titles. (I promised Hendrix I wouldn’t give away any surprises, but the book is a treasure trove of references for fans of a particular strain of midnight cinema.)

In his first-ever interview with The Big Thrill, Hendrix opens up about his novel’s seven-year journey to publication, how it was nearly derailed by another breakout book, and writing a better ending for some of horror’s most beloved characters. 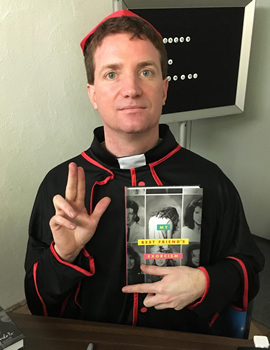 I’ve read that you went through a couple of very different drafts of The Southern Book Club’s Guide to Slaying Vampires before arriving at the version we read. Did you have a similar experience with THE FINAL GIRL SUPPORT GROUP?

I usually write a book in about 10 months, so when Southern Book Club took more like 14 it felt epic. Getting THE FINAL GIRL SUPPORT GROUP over the finish line took seven years, which is just ridiculous. I wanted it to be my book after My Best Friend’s Exorcism, but the day I sent the manuscript to my editor was the day Riley Sager’s Final Girls got announced in the trades. I tried again after We Sold Our Souls, this time with a new draft, and my editor still wasn’t interested. I banished it to the island of unpublished manuscripts on my hard drive and years later my manager wanted to see if I had anything he could be shopping to movie people while I labored over Southern Book Club. I gave him FINAL GIRL and, two more serious rewrites later, here we are. Easy!

Please tell me a little about your personal connection to the book’s subject: final girls and slasher movies.

I wasn’t allowed to see R-rated movies as a kid, so I read about them in magazines and then pretended I’d seen them. I pretended so hard that I often convinced myself. I “saw” Alien by reading the Walt Simonson comic book adaptation he did for Marvel, then proceeded to walk my carpool through the movie, beat by beat. The same thing happened with Friday the 13th Part 2. I convinced my scoutmaster that I was allowed to buy magazines with my snack money at the Oasis gas station after meetings, then I bought the issue of Fangoria with Friday 2 on the cover and was fascinated by their feature on the opening scene. In it, Alice Hardy (Adrienne King), the final girl from the original Friday, gets murdered by Jason while making some tea in her depressing kitchen. She thinks it’s just another Wednesday night, but she’s actually in the sequel. I thought this was so casually cruel and so bleak that I always wanted to rewrite it for her. Forty years later, I finally have. 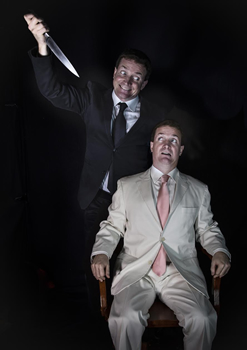 The central conceit of THE FINAL GIRL SUPPORT GROUP is that all the big slasher franchises are based on real crimes. What inspired that idea?

Well, we got a miniseries out of the murder of Nicole Brown Simpson and Ron Goldman, Jeremy Irons won an Oscar off the attempted murder of Sunny von Bülow, and Martin Scorsese has adapted so many real-life murders into movies that it’s hard to keep up. We can barely wait for the coffin lid to slam shut before some screenwriter starts typing away.

Final girls seem to be having a bit of a moment right now, and not just with horror fans. Why do you think that is?

I feel like that’s been going on for a little while. There were movies called both Final Girl and Final Girls in 2015, along with Scream Queens on TV, which was right after I finished the first draft of this book, so clearly something was in the water. Most of these movies and shows treated them like some kind of campy icon, and I wanted to take them seriously. What does it mean when the worst thing that can possibly happen to you happened when you were 17? 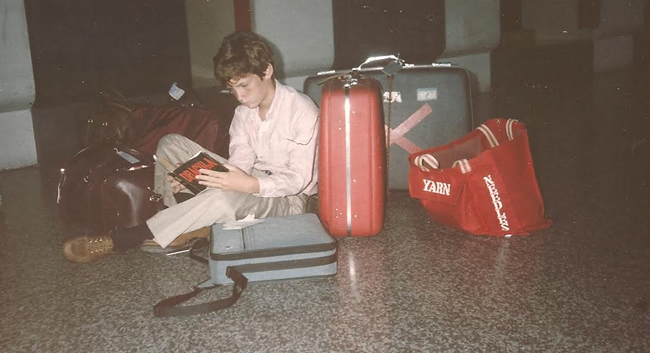 The author as a small child, ignoring instructions to “watch the bags” and choosing to read Dracula instead. Through sheer luck, no bags were actually stolen on this trip.

If you’re anything like me, you have a complicated relationship with horror. I’ve loved horror, including slasher movies, for as long as I can remember, but I don’t always love the way the genre treats women. I feel like that conflict is central to FGSG. Can you talk about it a little?

I love horror movies, but that also means I’ve been watching women get murdered for fun for something like 40 years, which sounds pretty unsavory. Horror definitely earned its reputation as gore porn in the early ’90s when the horror paperback bubble burst in a sticky shower of serial killer books copycatting Silence of the Lambs, egged on by the splatterpunk movement and publishers racing for the bottom with more and more sensationalistic covers. An awful lot of those books were about women getting tortured and murdered, and that stink has stuck to the genre, even though it’s very different now. Rewatching a lot of these movies, I realized that the movies I love, the ones I keep coming back to, are the ones where the focus isn’t on the killer but on the survivors. It’s a simple truth that horror repeats over and over again: you can survive anything. 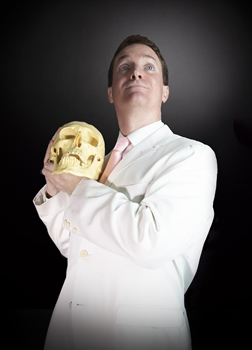 What did you enjoy most about writing the book, and what gave you the biggest headache?

The best part and the biggest headache were the same: the end. I always knew what the last paragraph would be, right from the very first draft, but I didn’t know how to get there. I had lots of versions that were…okay? Then in August 2020 I had to go to South Carolina and stay for a while because my mom got sick, and I suddenly realized what the ending needed to be. Hunched over a tiny desk in my mom’s all-orange guest bedroom, while that massive second wave of the pandemic swept the world, the only thing that kept me sane was getting Lynnette from where she started to where she ended up. We were both running through those woods together.

I’ve followed your career for years, and it was really fun to see Southern Book Club catch on the way it did. Did its success change anything for you?

Everything. There is an enormous difference in your career before and after you hit the New York Times bestseller list, even if you only gently kiss it the way I did. Everyone feels reassured that you’ve got potential, the words “New York Times bestselling author” start appearing on all your press material, and you always get the biggest slice of pizza after that. Also, you’re suddenly able to understand the language of the animals which really is something else. Who knew cats were so mean? [Ed. note: Everybody. — A.S.] 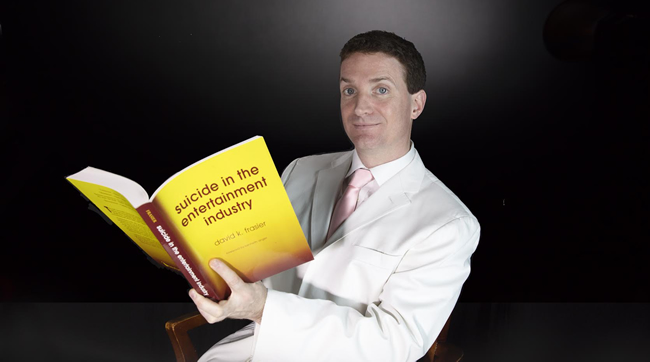 This is still Grady Hendrix.

Can you tell me anything at all about your next novel—or, for that matter, your kung fu movie book?

These Fists Break Bricks was supposed to be a coffee table book of martial arts movie posters, but it wound up eating an entire year of my life, which sounds about right if you’re going to tell the story of how kung fu movies came to America. It’s out in the fall, and my co-author, Chris Poggiali, is an intense researcher. We dug up stories about everything from 11-year-old boys making international blockbusters, to the CIA secretly financing karate films as fronts (think Argo meets Ed Wood), to the New York Times sparking a brutal police crackdown on Black New Yorkers by publishing fake stories about a fabricated street gang of Black karate experts out to murder white people, something they’ve never acknowledged or apologized for. As for the new novel, it’ll be out next year, and all I can say is that it’s about brothers and sisters and evil puppets, and it’s set in the midst of 2020.