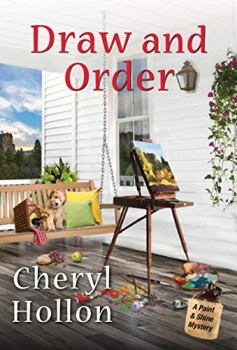 Appalachian artist and local guide Miranda Trent opens a new murder investigation after her Paint & Shine tour group discovers the remains of a missing hiker along an ancient trail . . .

For her latest excursion, Miranda is thrilled to take a close-knit group of rock climbers, the Risky Business Adventurers, up the challenging Battleship Rock Trail to paint and sample moonshine. But the outing is cut short when they discover a skeleton near the trailhead. Even more startling, the bones belong to Howard Cable, Miranda’s cousin…and a former classmate of the Risky Business group.

The sheriff chalks it up to a hiking accident, but Miranda isn’t convinced that Howard, an experienced woodsman, died within sight of a well-marked trail. So with the help of Ranger Austin Morgan, Miranda sets out on her own investigation and discovers that the Risky Business group is keeping plenty of secrets. But is one of them hiding the truth about Howard’s death?

In this series, the setting came first. This part of eastern Kentucky is where my parents were born, raised, and wed. I was born there, too. We moved to Ohio shortly after that so my dad could get a good job, but most of my summers were spent in Wolfe County with my grandparents.

Character arrived next in the form of Amanda Trent, a failed New York City artist who couldn’t sell her paintings for enough to pay rent. Adventurous, talented, determined, and delighted to inherit her family’s farmhouse smack dab in the middle of the Daniel Boone National Forest.

The biggest challenge to finishing this book was that my father passed away while I was crafting the first draft. The series is based on the farmhouse that his father built, and my dad loved it with the passion of people who love their land. He would have loved this story. Finishing it helped heal my enormous grief.

The Paint & Shine mysteries fit the Cozy Mystery genre by showing what happens when you put an artist in the role of inappropriate sleuth to solve a crime. It is lighthearted, with plenty of humor, no graphic violence or sex, and includes a close-knit community while Miranda juggles her fledgling tourist business.

Cheryl Hollon writes full-time after an engineering career designing and installing military flight simulators in England, Wales, Australia, Singapore, Taiwan, and India. Living the dream, she combines a love of writing with a passion for creating art in St. Petersburg, Florida. Cheryl is past president of the Florida Gulf Coast Sisters in Crime and a member of Mystery Writers of America and International Thriller Writers.