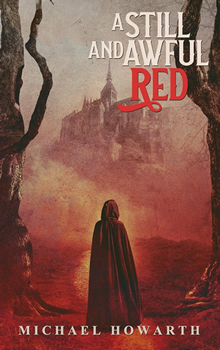 Hungary, 1609. Maria, a young peasant girl, is an accomplished seamstress who dreams of a more prosperous life, away from the constant threat of war, famine, and disease. Then an old woman arrives at her cottage and informs Maria that she has been chosen by Countess Elizabeth Bathory to sew a series of elaborate gowns.

Entranced by the nobility, Maria dreams of receiving lavish attention and being invited into Countess Bathory’s inner circle. But upon arriving at the castle she suspects she is in terrible danger. Servants are beaten and then disappear, the Countess herself is prone to fits of rage, and there are screams in the middle of the night.

As Maria explores the castle and unravels its inner secrets, she finds herself a prisoner, as well as an unwilling pawn in Countess Bathory’s murderous plot to retain both her power and beauty.

The Big Thrill recently caught up with author Michael Howarth to learn more about his chilling new historical thriller.

How did you first learn of the historic events surrounding the case of Countess Elizabeth Bathory, and when did the idea for a novel related to the subject begin to take shape?

I first learned of Elizabeth Bathory when I was a high school student. I had always been a huge horror fan—whether devouring most of Stephen King’s novels while I was in middle school or ensconced in my living room watching horror films from the ’70s and ’80s—so when I was doing research on the gothic for a term paper, I came across some information on Elizabeth Bathory and immediately found her both tragic and fascinating.

Over the years, I’ve read several books on the Countess, and watched several film versions of her story. After my young adult novel Fair Weather Ninjas was published, I wanted to write something different, and I remembered how much I have enjoyed reading and teaching historical fiction. Immediately, I thought of Elizabeth Bathory and decided to write a gothic thriller that revolved around her exploits at the castle.

Tell us about your main character, Maria. What is her life like at the time the story takes place?

The main character in the novel, Maria, was so much fun to write. When I first began outlining the story, I knew I had to tackle a different approach than what had already been done with the story of Elizabeth Bathory. While there have been many novels and films detailing her numerous abuses, they tend to focus on the countess herself, whereas my novel approaches the story from the perspective of a young woman who works in the castle as a seamstress.

Because I am also a fan of thrillers, I also wanted to inject a mystery into my story. Some of my favorite gothic novels are from the Romantic and Victorian period—such as Dracula and Frankenstein or The Monk and Carmilla—and I love reading a gothic novel that contains an intriguing mystery that adds to the suspense. This added element was instrumental in helping to develop Maria’s character throughout the novel because like many teenagers she is naïve about the greater world and her place in it. She struggles with relationships and with achieving independence. As a lower class seamstress, Maria dreams of being welcomed by the countess and valued for not just her skills, but for who she is as a person. As Maria explores more and more of the castle, she is forced to make her own choices, whether good or bad, which help to develop her own identity.

Maria is a 16-year-old woman who is struggling to achieve a happier and more prosperous life. Like most peasants, she has seen suffering, and she understands the restrictions of class. But she still wants to break free from those societal chains and prove herself worthy. I especially like the tension in the novel between Maria and the countess because it helps to promote several important themes like jealousy and beauty, or perhaps even class. In many ways, A STILL AND AWFUL RED is a dark and bloody fairy tale for adults.

How did you go about conducting your research? Did you encounter any challenges when looking into a period so far in the past?

I absolutely loved researching this novel. I have always wanted to visit Eastern Europe, specifically Romania, so it was a treat to delve into the historical period in which this story takes place. While researching and writing the novel, I drew on my love for both classic gothic texts of the 19th century, as well as Hammer Studio films from the 1960s and 1970s. Over a six-month period, I gathered and read official testimonies, court documents, and letters relating to the life of Elizabeth Bathory and the captivating stories that have contributed to her legacy. As I began to outline the story, I checked books out of libraries, purchased books online, and read extensive articles that discussed Elizabeth Bathory and her infamy as one of the world’s most prolific serial killers.

I also did extensive research on the food, clothing, and seasons, as well as on the flora and fauna of Hungary so as to create a rich setting that would generate a spooky atmosphere and contribute to the gothic elements that are so integral in helping to develop the characters. Luckily, because so much has been written about Elizabeth Bathory, I didn’t encounter any challenges when looking into Hungary during the early 17th century.

What elements do you feel are essential for a good historical thriller?

Setting is key when crafting a good historical thriller. It’s so important to show how the characters react not only to each other, but also to their surroundings. There also needs to be a nice balance between light and dark, between good and evil, because this creates tension and conflict. One of the characteristics of gothic literature I have always loved is how the gothic elements are often an externalization of internal conflicts and emotions. That is an important aspect of the gothic that I wanted to highlight in A STILL AND AWFUL RED. I always like to see how the characters interact and respond to those gothic elements.

There also needs to be suspense, which seems obvious, but it works best when connected to a character’s own emotions, when it impacts specific goals and motivations. There are many times in A STILL AND AWFUL RED when Maria finds herself in a tense situation and is forced to make an important decision and then deal with the repercussions from that decision, whether they are positive or negative.

Finally, every good historical thriller needs a great villain, and Elizabeth Bathory performed more than enough heinous acts during her lifetime to secure her spot as a truly wicked person. I loved writing dialogue for her because I could imagine her delivering those lines with anger in her voice, or explaining simple directions with a hint of menace, or uttering her thoughts in a way that might seem reassuring but was actually quite threatening. She is terrifying and impulsive, but she is also a tragic figure because she was afraid of aging and losing her beauty, which also meant losing her influence and authority. In many ways, her horrible actions were also spurred by those around her who believed she was weak and tried to take advantage so as to secure more power and wealth.

If you could travel back in time to the time and place where this story occurs, would you?

If given the opportunity, I would not travel back in time to visit Elizabeth Bathory’s castle. The atmosphere was too oppressive, and everyone who worked in the castle was constantly worried about incurring Her Ladyship’s wrath. Rather than enjoy the historical details of the castle, as well as the natural scenery of the Hungarian countryside, I would probably be glancing over my shoulder at every turn, worried that the countess would suddenly fly into one of her infamous fits of rage. I imagine that to live in that castle was to live in a constant state of fear and helplessness. Knowing the immeasurable pain and torture, both physical and emotional, that the female servants in her castle endured, I wouldn’t want to be a witness to such atrocities.

Though I do have to admit that the offer would certainly be tempting, especially because there are still debates over which aspects of her life are true and which have been exaggerated. Given the many stories surrounding Elizabeth Bathory—the political issues, gender issues, and her own personal issues, to name a few—I would be interested in traveling back in time simply to observe her actions and to see for myself what is actually fact and what is fiction.

Michael Howarth was born in Hyannis, Massachusetts. He is the author of two critical texts, namely Under the Bed, Creeping: Psychoanalyzing the Gothic in Children’s Literature and Movies to See before You Graduate from High School. He is also the author of the young adult novel Fair Weather Ninjas. A professor of English at Missouri Southern State University, he teaches children’s literature and film studies in addition to directing the Honors Program. He currently lives in Joplin, Missouri, with his wife, the poet Joey Brown.

To learn more about the author and his work, please visit his Facebook page.