A Twisty Tale of Psychological Suspense 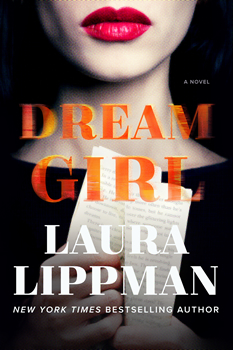 Laura Lippman’s bestselling and acclaimed books have been described by many people as “unique” and “twisty” tales of psychological suspense, much different than the traditional thriller—and DREAM GIRL certainly fits that category.

A successful author, confined to bed after a freak accident, finds himself being stalked by a fictional woman he created for his most famous novel—a woman everyone else claims simply isn’t there. Is she fantasy or supernatural or real? You’ll keep turning the pages to find out the answer until the book’s shocking ending.

“The weird thing is, I never set out to write twisty stories,” Lippman says. “I really don’t. I commit to characters and a situation, and I follow the logic that seems obvious to me: Here’s what these people would do in this situation.

“But, also, once I have the first draft, I always go back to something I heard Dennis Lehane say 20-plus years ago: Chinatown is a very simple story if you know that Evelyn Mulwray was raped by her father and had his child. There’s a bit of sleight of hand—look here, pay attention to this shiny object! But I hope I’m always playing fair.”

Some people have compared this book to Stephen King’s Misery—because of the idea of her bedridden author, Gerry Andersen, living a similar real-life nightmare.

“I’m the first to make that comparison,” Lippman says. “It’s a tribute, definitely, but it’s also shaped by the way the life of the writer has changed over the decades. No one in DREAM GIRL is Gerry Andersen’s #1 fan, far from it. Gerry is trapped in a peculiar hell where everyone wants to write and no one seems to read.”

What gave her the idea to write such a different kind of book? “It was the end of 2018 and I was watching A Quiet Place over the Christmas break. And I couldn’t help but notice how often horror depends on a very literal isolation. But I also felt that there was a lot of unseen isolation in modern lives, that the buzz of social media made us feel we had deep connections even if we did not. I wanted to play with that idea of isolation among people.”

Much of DREAM GIRL alternates between scenes of Gerry’s bedridden moments of being spooked by the fictional woman character he created for his own bestselling novel called Dream Girl and flashbacks of his past life which explain a lot about his present situation and sets up the climactic ending to the book.

“I had this pretty conscious plan that Gerry’s memories would start as concrete, obvious—a hospital visit in the present would remind him of a hospital visit in the past, for example. But as the book goes on, the memories are increasingly random, seizing on tiny words/moments. (A fleeting memory of the movie Scarface in real life leads him to remember a visit to a pizza restaurant called Al Pacino’s, for example.) It was important to me that I understand the links even if they were invisible to the reader.”

Did she know the ending (it’s unexpected and shocking!) when she started writing DREAM GIRL? “No, I had a very different idea about the ending, but as the story evolved, I realized there had to be a very specific, singular end.”

Another amazing thing that makes DREAM GIRL different from most books is there are really no sympathetic characters in it. Much like Gillian Flynn did with Gone Girl, Lippman has produced incredibly compelling characters, but none of them are particularly likeable people.

So how important does she think it is for her characters to be likeable?

“Not at all. They have to be charismatic. Or at least interesting. I’m a big fan of Howard Stern, and I think a lot about the scene in Private Parts where the NBC radio executives marvel at the fact that people who hate him still listen to him because they want to know what he’s going to say next. Readers just have to want to know what happens next.”

Lippman had a long career in newspapers before she started writing novels. I brought up the fact that Michael Connelly has said he didn’t think he could have ever become the fiction writer he is today if he hadn’t been a newspaper reporter first. Does she agree with Connelly about the importance of her journalism background?

Her answer is a resounding yes. “Obviously, there are many paths. But, like Michael Connelly, I think I needed to be a reporter first. It took me outside myself, into other lives.”

In addition to being a bestselling author, Lippman also has become well-known online for her tweets on a variety of subjects—not just about her books and writing. But she laughingly dismisses any idea that she’s become a social media star.

“A social media star? Get out. My Twitter account hovers right at the number of followers at which people begin to go viral, 30,000 or so, and yet I seldom go viral. I also seldom get trolled, something I see happening to my female friends all the time, and that strikes me as a fair bargain.

What’s next for Lippman? Well, her fans should be prepared for more surprises and “unique” thrillers like DREAM GIRL and Lady in the Lake, her previous highly acclaimed book set in the 1960s about a middle-aged housewife turned aspiring reporter who pursues the murder of a forgotten young Black woman.

“As for ‘unique’—I’m just trying to write books that only I would write,” she says. “And I have to change up from book to book. Lady in the Lake had a very charmed life. There was an argument to be made that I should have followed up with another ‘historical’ work with a big cast, right? So what do I do? I write the most claustrophobic book I can imagine. I limit myself to one POV, and it’s somebody who can’t leave his apartment. The main thing I’m setting out to do when I write a book is to make people care about my imperfect people.”

We could also at some point see the return of Tess Monaghan, the ex-newspaper reporter turned private investigator she started out writing a series about more than 20 years ago. She said she still hopes to bring Tess back. “Don’t ask me why, but I think there are three more Tess books. I just haven’t found them yet.”

Lippman’s next book will be something completely different.

“I’m working on a novel inspired by a podcast, You’re Wrong About. (When you walk as much as I do, you listen to a lot of podcasts.) It’s called Prom Mom, and it’s set against the backdrop of the pandemic—the pandemic isn’t the story, it’s simply the reality the characters are dealing with as they go about their daily lives. It’s Double Indemnity with—dare I say it—a twist.”