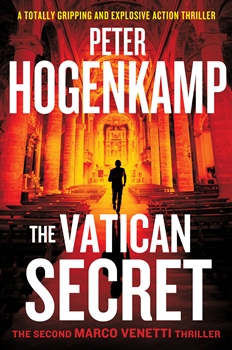 Marco Venetti, the only man the pope trusts, has tracked down the traitor who nearly succeeded in his mission to kill the pope. But the traitor holds a crucial piece of information: the name of the Russian mafioso in possession of a nuclear bomb.

Forced to work with a man he despises to prevent a deadly explosion, Marco sets a trap for the Russians. Inside the stone walls of an ancient castle in Portugal, surrounded by high mountains, he waits to ambush his target. But a double-cross ruins everything, and he must flee, alone and without backup, leaving a trail of death and destruction behind.

All Marco knows is that the attack is imminent. And that to prevent it, he must enter a deadly game of cat-and-mouse that will take him across the continent, on land and by sea. With time running out, he will stop at nothing to uncover the truth. Because the secrets inside the Vatican may be the deadliest threat of all…

In the first book of this series, THE VATICAN SECRET, I definitely started with the main character, the conflicted Jesuit priest Marco Venetti, and the setting, the lovely Cinque Terre in Italy. But being the second in the series, with character and setting already established, THE VATICAN SECRET started and ended with plot. Book 1 ended with a clear mission for Marco, and I wanted to get out that mission as quickly as possible, and then throw in as many roadblocks as I could to test his resolve and stir up the conflict always bubbling over in his viscera.

All too often, readers are presented with a world of absolutes, where the protagonist is not only good-looking and brave, but morally sound. On the other side of the equation, the antagonist is almost always morally flawed and occasionally downright evil. I have always found this to be disingenuous if not completely ridiculous. In my world, and the real the one, I believe, we are all a collage of good and bad instincts, defining-actions and fiber. Why should the characters in my books be any different?

One of the things I am most proud of in terms of my writing career is the many comments I have received about the descriptive quality of my writing. Recently, with international travel essentially shut down, I have tried to transport my readers to Europe with prose, endeavoring to make them feel as if they are there, sitting on the rocky shore of the Cinque Terre with the roar of the breakers filling the ears and the taste of salt on the tongue, or climbing an alpine peak in Austria with the smell of pine hanging in the air, or walking across Saint Peter’s Square in Rome, with the heavy feel of cobbles underfoot and the massive bulk of the basilica towering overhead. Reading is about being transported somewhere, and that somewhere might as well be someplace we all want to go.

Alistair MacLean, because he invented the modern thriller. Daniel Silva, because he perfected it. Robert Wilson, because he is a great thriller writer not enough people have read. Graham Greene, because he wrote the book that changed my life, The Power and the Glory. And Tess Gerritsen, who proved that literary fiction does not have exclusive rights to great prose.

He is the founder and editor of The Book Stops Here, a literary blog for readers and writers written by authors, agents, editors, publishers, and poets. Peter is the creator, producer, and host of Your Health Matters, a health information program, which airs on cable television, streams on YouTube, and sounds off on podcast. Peter was a finalist for the prestigious 2019 Killer Nashville Claymore Award as well as a top finalist for the 2020 Vermont Writer’s Prize.

He tweets—against the wishes of his wife, four children, and feisty Cairn Terrier, Hermione, and he can be reached on his Facebook page or email him at: peterhogenkampbooks@gmail.com.

To learn more about the author and his work, please visit his website, as well as his personal blog where he writes about most anything.