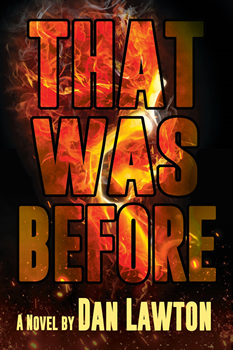 Feeling trapped in an unhappy marriage, mechanical engineer Randolph Spiers quits his job and works up his courage to invite an attractive supermarket cashier to lunch. The old Randolph would have gone home to his wife, Patricia, and continued to tolerate her unfaithfulness, but minutes after he exits, the store explodes with the cashier trapped inside.

With a hook like that, we contacted author Dan Lawton to find out more about his sixth novel, THAT WAS BEFORE.

“I’m fascinated by stories of relationships—particularly marriages—breaking down,” Lawton says, “so I wanted to weave a thriller around that concept. From there, I imagined what a middle-aged empty nester might do with himself afterward.”

Lawton, who won the Independent Publisher Book Award for Adult E-Book Fiction (The IPPY Award) for The Green House and the New Hampshire Writers’ Project Readers’ Choice Award for Plum Springs, says he can relate to a character like Randolph. “While none of the characters are inspired by anyone in my life, I share some traits with him. For that, I can sympathize with his dilemmas.

“What makes Randolph believable is how conflicted he is about everything he does. His self-confidence is low. He’s analytical, but his will power is no stronger than yours or mine. Sometimes we give in to temptation when maybe we shouldn’t.”

That said, this story began with a loose outline, but then took off in its own direction. “I definitely don’t plot [my stories] out fully. So much changes as I write, so it wouldn’t be a productive use of time for me,” Lawton says. “Certain aspects I enjoy figuring out as I write. Generally, I know what’s going to happen one or two scenes in advance. Eventually the ending comes into view, and then the last 10,000 words fly out of me.”

THAT WAS BEFORE is the debut of a three-book series. “I knew what would happen to one of the major players to keep the plot moving, but the journey wasn’t well-defined—that’s the fun of writing for me. The story evolved so many times, in that characters did or said things he hadn’t considered, which led to different directions for the plot.”

Lawton, who loves all aspects of sports and movies, had assumed he would write later in life, but when his daughter was born, he found himself spending more time at home, “I thought I’d give it a shot.” Eight years later, he hasn’t stopped. “Can’t, really.”

Not much has changed about his writing process during the past year of pandemic lockdowns. “I’m a structured writer—I don’t write during the summer, hit it hard during the fall and early winter, and I’m usually close to being finished, if not done, by springtime.”

The stories he wants to tell are what drive him. “I’m self-motivated. Also, I want to put out new material for my readers so I stay top-of-mind and am not forgotten.”

However, the process of launching new books did change amid the pandemic. “Instead of [attending] events, I interviewed on quite a few podcasts and filmed an interview remotely for a local television studio—it’s all about adapting. My publisher and I homed in on digital promotion too, which was relatively successful.”
Lawton says his books all have elements of mystery and suspense “while being realistic in the natural world. My goal is to use real life as a backdrop to a suspenseful and entertaining story, so a reader could envision it happening to someone or to themselves.” He says his deep dive into character emotions appeals to fans of suspense, especially women over 45. He’s also considered writing in the romance genre, but for now is sticking with suspense.

One of the twists in this story involves some of the characters using pseudonyms. “That’s what people would do in the situations they are in—use a pseudonym to protect themselves. It all circles back to wanting to make the plot as realistic as possible for the characters.” The reader will have to figure out who they really are.

Lawton keeps us guessing. “The twists develop as the story does. I knew there was a prior relationship between certain characters that drove the intentions of one of them. What that relationship was didn’t matter to me at first; it was something I’d figure out later once the characters’ personalities developed. Once they manifest themselves, I go back if needed and plant seeds or adjust previous sections to fit the twist.”

The second book in the THAT WAS BEFORE series, entitled Now Was After, will be published on February 3, 2022. “Sometime later this year, I’ll start writing the third book in the series (title to be determined, although I have some ideas) and will likely finish in early 2022, if not before. After that, I’m not sure. I have so many ideas written down, it’s just a matter of what interests me most at that time. Usually it’s something not even on my list that pops.”

By day, Dan is a copy editor and copywriter.