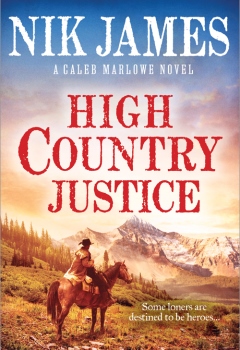 When Doc—Caleb’s only friend in town—goes missing, his daughter comes seeking his help. Newly arrived from back East, she hotly condemns the bloody frontier justice of the rifle and the six-gun. But this is the high country, and justice is fierce.

The challenge in writing HIGH COUNTRY JUSTICE, our first Caleb Marlowe novel, was to create a story that combined elements of the thriller with the traditional American historical Western.

Crossing over into new genre territory and finding new readers is always a tremendous opportunity.

HIGH COUNTRY JUSTICE and all of the upcoming Nik James novels are not the whitewashed Westerns that have dominated the genre since the 1940s. Our stories are populated by Native American and Asian and Black characters who existed and carved out lives on the American frontier, even though they have been all but erased from our histories and our popular fiction.

HIGH COUNTRY JUSTICE attempts to shake up and reshape a genre that has traditionally been fraught with racism and misogyny. Our characters are fresh and real, our secondary characters are not stereotypes, and the work is informed by historical research.

These novels are not your grandfather’s Westerns. The Nik James ‘Caleb Marlowe’ novels have the historical feel of Lonesome Dove, the high-powered action of John Wick, and the heightened social awareness of 2021.

The range of our reading is broad and eclectic, so it is difficult to pin down just a few who have influenced us. Of our contemporaries, however, writers like Dean Koontz and Heather Graham, who have successfully struck out into a variety of genres, continue to be an influence on us.

Q. How did your writing career take you from medieval Scottish historicals to contemporary thrillers and Westerns?

Our journey has now taken us to the fictional world of ‘Westerns’, where there is no viable system of justice in place, no law and order…except that which the strong, independent hero can impose. It is a world where Caleb Marlowe, the protagonist of this new series, lives by a code that pits him against the ruthless greed and murderous ambition of landowners and railroad barons, as well as the powerful natural forces of the American frontier. Drawn to the chaos in which men and women must carve out a place for themselves, we as authors have finally come home.

Nik James is a pseudonym for award-winning USA Today bestselling authors Nikoo and Jim McGoldrick. They are the writing team behind over four dozen conflict-filled contemporary thrillers and historical romances, as well as two works of nonfiction. They make their home in California.

To learn more about the authors and their work, please visit their website.