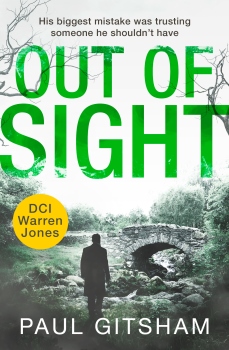 When a body is found abandoned under a bridge, teeth and fingerprints removed, DCI Warren Jones and his team have little to go on. And once they finally identify the victim, the case doesn’t get any easier.

The victim was estranged from his family and led a solitary life—apart from secretive online liaisons. The deeper Warren and his team dig, the murkier his life becomes. Does the key to his death lie within his online lifestyle, or is it closer to home?

Paul Gitsham recently spent some time with The Big Thrill discussing his latest thriller, OUT OF SIGHT:

It’s a toss-up between plot and setting. The book is the mashing together of two separate ideas. The basic premise had been at the back of my mind for years, but a persistent image of a body in a ditch had been haunting my thoughts for just as long. Eventually the time was right and they came together.

Initially, the book was due to be a novella. But the story was growing in scope, and there was no way that I could incorporate all those ideas. Then my publisher and I decided to stop publishing novellas for commercial reasons and stick to full-lengths. Suddenly I had the space to tell the story that I really wanted to.

Hard-bitten detectives burdened by personal demons are a staple of crime fiction. From the outset of my series, I’ve always wanted DCI Warren Jones to be a bit different. He has challenges in his personal life, and a history that we learn about as the series progresses, but he also has a happy marriage and no substance abuse issues. He passes what I call the ‘Friday night pint test’—he is the sort of bloke that you could happily go for a quiet drink with.

Perhaps this line from the book sums it up best:

“Over the course of his career he had seen many spiteful and shocking things. But it never ceased to amaze him how the cruelest behaviour often came from the ones who were supposed to love you the most.”

Q: Did you consciously set out to create a detective that doesn’t conform to the stereotype of the hard-drinking chain-smoker with a failed marriage?

A: Yes, that was my goal from day one. I love a troubled detective as much as the next fan, but I needed to be able to relate to a character that I have now spent over ten years living with. Furthermore, there are so many brilliantly-realised, flawed investigators out there, that I wanted to to do something a little different and not go toe to toe with such wonderful creations.

Paul Gitsham started his career as a biologist, working in Manchester and Toronto before retraining as a science teacher. Along the way, he had spells as the world’s most over-qualified receptionist and spent time working for a major UK bank, ensuring that terrorists, foreign dictators, and other international ne’er do wells hadn’t embarrassed the institution by managing to deposit their ill-gotten gains in a Children’s Trust Fund.
Paul is the author of the DCI Warren Jones series and is a member of the Crime Writers’ Association and International Thriller Writers. He lives with his fiancée in the East of England, in a house with more books than shelf space.