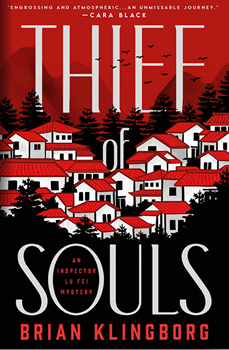 Recent graduate Inspector Lu Fei has spent the start of his police career solving small-time crimes in a rural village in Northern China. But when a young woman is brutally murdered in his sleepy backwater town, Fei can’t trust that the criminal investigations agent sent from Beijing to solve the case will find justice for the girl—the agent seems more interested in pinning the crime on the most available suspect.

Now on his own, Lu finds himself up against local Communist Party bosses and corrupt business associates, none of whom seem to care much about the victim or the gruesome crime.

Unfazed, Lu continues his investigation into the real killer and discovers this case may be linked to a number of other unsolved homicides. But the closer Lu gets to the heart of the mystery, the more he puts himself and his loved ones in danger.

In this exclusive interview with The Big Thrill, author Brian Klingborg shares insight into the first book in his new series and explains why he felt it was important to set the books in China, especially in these tumultuous times.

THIEF OF SOULS kicks off with a violent crime—a murdered woman whose organs have been removed. This is an extremely visceral image. When writing, how do you determine how graphic the violence will be?

I personally don’t shy away from graphic content as a reader or viewer. In fact, I’m a huge fan of horror films. But there is a point where things are just gratuitous and unnecessary. As a writer, I am trying to evoke a very visceral reaction and make you feel the same fear, disgust, and shock as the protagonist, without veering into territory that is exploitative or unwarranted. THIEF OF SOULS does have some dark and graphic passages, but also a generous allotment of poetry, romance, and humor.

The book is set in China and offers compelling description of Chinese culture. What layers did the setting alone bring to the mystery itself?

Law enforcement in China is very different from the US, and the Chinese Communist Party permeates all levels of the criminal justice system. This is something that really informs the trajectory of the investigation in THIEF OF SOULS. In fact, almost every element of the plot—the motivations of the characters, procedural details, challenges faced by our protagonist along the way, and the nature of the crime itself—were influenced by the setting. Readers will recognize certain universal themes, but I feel it’s safe to say this is a story that could not take place anywhere else but China.

You lived in China for many years and studied Chinese cultural anthropology—what were some of the cultural elements you really wanted readers to understand after devouring your novel? Why was it important to you to set the novel there?

In addition to hopefully telling a good mystery story, I wanted to provide Western readers with a bit of historical and cultural context to help them better understand the thoughts and feelings of your average Chinese citizen. While people in China are fed a steady diet of negative propaganda regarding the US basically from birth, if you travel there, you will find them to be curious and welcoming. Meanwhile, in the wake of the coronavirus, China has become America’s new favorite bogeyman. While some of the suspicion and criticism regarding our respective governments is warranted, I hope in some small way THIEF OF SOULS can put a human face on a country that is increasingly relevant in so many ways to our daily lives.

Was it difficult to navigate a police procedural in a culture and setting that may be unfamiliar to North American readers? How were you able to research to create authenticity?

I have never (luckily) been arrested in China, so all my research had to be conducted secondhand. I definitely wanted to get the facts right, and this proved more difficult in some areas than in others. There are currently some excellent resources available for understanding the Chinese criminal justice system and policing. But a lot of minor details that provide necessary color and authenticity were a bit more difficult to come by. In the end I simplified matters and took some liberties—in China, Lu Fei would not be called “Inspector,” for example—but generally, the information presented in THIEF OF SOULS regarding local politics, criminal justice, the steps taken in an investigation, and the pervasive influence of the Chinese Communist Party, are true to life.

THIEF OF SOULS is the first book in a planned series about Lu Fei. What—or who—was the inspiration for his character? How do you foresee him growing in future novels?

Many aspects of Lu Fei’s character will no doubt be very familiar to Western readers of crime fiction. His gruff exterior hides a soft heart. He uses humor as a shield. He drinks too much. He wants to do the right thing in the face of resistance from corrupt superiors and a criminal justice system that is more concerned with the optics of closing a case than seeing justice served. But my intention was to create a character who was an accurate representation of his culture and upbringing. In other words, I wanted Lu Fei to be relatable, but still authentically Chinese—whatever that means—in his attitudes and world view.

As far as future novels go, I hope to explore more of the unique and fascinating elements of Chinese religion, politics, society, and culture through Lu Fei’s misadventures.

My plot hinges on some very creepy and interesting Chinese cultural traditions.

In terms of trying to write a mystery that was a bit more than just an entertaining read, I looked toward John le Carré and George MacDonald Fraser. For his ability to blend philosophical musings, a strong sense of place, and a raw visceral story, I admire John Burdett’s Bangkok Eight. For pithy but effective dialogue and description, you can’t beat Cormac McCarthy’s No Country for Old Men.

Presumably, you are hard at work on the second book in the series. What can you share about the plot or conceit for that novel?

Book two in the series has Lu Fei getting involved in a missing persons case which ultimately leads him to infiltrate the illicit wildlife trade deep in the heart of Myanmar.

Brian Klingborg has both a B.A. (University of California, Davis) and an M.A. (Harvard) in East Asian studies and spent years living and working in Asia. He currently works in early childhood educational publishing and lives in New York City. Klingborg is also the author of Kill Devil Falls.