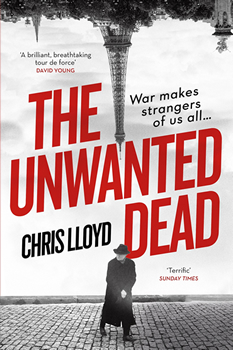 The Times praises the thriller’s “… convincingly cloying atmosphere of a city subjugated to a foreign power, a plot that reaches across war-torn Europe and into the rifts in the Nazi factions, and a hero who tries to be a good man in a bad world. Powerful stuff.”

Lloyd talks of his fourth novel as “a defining moment in French and European history,” illustrating “a generation that is disappearing. Their voices won’t be heard firsthand for much longer. It’s up to subsequent generations to make sure those voices and those stories continue to be heard.”

THE UNWANTED DEAD features Eddie Giral, a Paris police detective living under the shadow cast by his experiences in World War I, who is now forced to come to terms with the Nazi Occupation. On the day German troops march into Paris, four refugees are found dead in a railway truck. Watching helplessly as his world changes forever, Eddie focuses on the one thing left under his control: finding whoever is responsible for the murders of the dead no one wants to claim. To do so, he must tread the razor’s edge between the Occupation and the Resistance, truth and lies, the man he is, and the man he was—all the while becoming whoever he must be to survive in this new and terrible order descending on his home.

Lloyd says he “wanted to explore the effects on Eddie of trying to keep a balance between doing his job, negotiating a path between working with the Occupier while also resisting them, and retaining some form of what he would see as normality under such extreme circumstances.”

The conflict of interest surrounding an officer of the law makes for a powerful character study. Eddie Giral’s country, city, and profession demand his unswerving loyalty, whereas the invaders and occupiers impose their own agenda.

Lloyd says he was intrigued by “how a police detective would be able to do their job and keep their focus while there was so much destruction and hardship going on around them. That immediately gave me the character—Eddie Giral—an emotionally scarred veteran of the First World War who has made many mistakes in his life but who tries to retain some semblance of humanity under the new order. The … situation is his chance for redemption for past errors, but it’s also a potential descent into the self-destructive ways of his previous life.”

Giral emerges as neither “an all-good action hero nor an all-bad antihero, but a person with the foibles and weaknesses that we all share, and who struggles to survive intact in adverse times.”

The induced challenge of managing such intersecting conflicts within a historical framework is not for the faint-hearted, but Lloyd chose and successfully met this challenge, leading Andrew Taylor, an award-winning, bestselling crime writer, to describe THE UNWANTED DEAD as “such a powerful and morally nuanced crime novel.”

Lloyd admits that “the book’s biggest challenge also proved to be its greatest opportunity—the research…. I wanted the period and the setting to be as accurate as possible. THE UNWANTED DEAD takes place in the first 10 days of the Occupation” and draws out “all the various nuances and visions of what resistance meant to the different groups, and the rivalries and disagreements that it engendered. This, alongside the equally complex factions within the Occupier, are areas that fascinate me and that I’m particularly looking forward to exploring in subsequent books in Eddie’s story.”

Lloyd claims he was born to write: “I can’t remember a time when I wasn’t writing—I was lucky in that my mum encouraged me to read and my dad encouraged me to write, and I spent my childhood writing short stories and sketches. It was when my mum gave me a copy of Ian Serraillier’s Silver Sword that it seemed to distil in my mind that that was what I wanted to do. Later, I loved the contrast between the golden-age writers, such as Josephine Tey and Agatha Christie, and the hard-boiled noir writers of the likes of Raymond Chandler and Dashiell Hammett. I try to achieve a crossover between the two worlds. In more recent years, I love the historical works of Robert Harris, Philip Kerr, and David Downing, and the resonance their stories have on today’s world. They are all qualities to strive for.”

He writes at a “lovely old wooden desk,” surrounded by “books, paintings and objects that have meaning for me. Outside the window, I see houses, trees, and hills, but I’ve turned my desk at a right angle to the window, so the view is there for when I need it, not a distraction.

“When I write, I like working with two screens—one to write on and a second where I have the story outline in view.”

Lloyd has had a lifelong love affair with the conflict between the Resistance and Collaboration in Occupied France, which continues in France to this day.

He grew up in Cardiff, Wales. Following his graduation in Spanish and French, he spent twenty-four years in Catalonia, teaching English, working in educational publishing, translating, and travel writing. He has also lived in Grenoble, France, researching the often-underappreciated depth and complexity of the French Resistance movement.

He now lives in his native Wales where he also works as a writer-translator and is an active member of Crime Cymru, a “collective of crime writers who are from Wales, live in Wales, or set their stories in Wales. A former rugby player and committed supporter, he is also an avid traveler.

Chris Lloyd is the author of the Eddie Giral crime thriller series, the result of his lifelong interest in resistance and collaboration in Occupied France.

Chris grew up in Cardiff (Wales) and, after graduating in Spanish and French, spent 24 years in Catalonia, where he taught English and worked in educational publishing and as a travel writer and translator. Besides this, he’s also lived in Grenoble (France), researching the French Resistance movement, a far deeper and more complex subject than history often teaches us. He now lives in his native Wales where he works as a writer and translator.