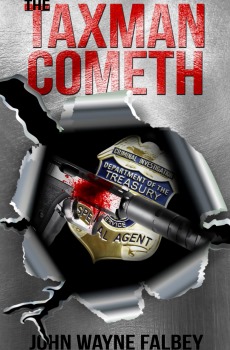 A rogue IRS agent leads a raid on the wrong house and destroys Finn O’Casey’s world. A sympathetic neighbor, the leader of organized crime, is not what he seems to be. Both men thought O’Casey was a mild-mannered accountant. They thought wrong. O’Casey, a former member of an elite special operations unit, goes dark and rejoins his former colleagues, promising vengeance on those responsible. The moral: Be careful who you choose as a victim.

The plot and character emerged simultaneously in my imagination, then the setting went through a couple of changes.

This book is a departure from my thriller series The Sleeping Dogs. It required a completely new set of characters and storyline.

There is a story behind why I wrote this one-off instead of the next thriller in the Sleeping Dogs series. I was approached by two separate literary agents who were impressed with my writing skills. The problem was that I had self-published the books in the Sleeping Dogs series. They didn’t want to approach publishers with any of the existing books and feared that a subsequent book in the series would be tainted by association. They asked me to write something entirely unrelated. That turned out to be THE TAXMAN COMETH.

John Wayne Falbey writes thrillers set in the contemporary world of international espionage and geopolitical intrigue. He wrote his first book while he was a student at Vanderbilt University School of Law. He subsequently practiced law in his native state of Florida and later became involved in land development. Along the way, he earned a masters and a doctoral degree in business management. He also spent five years in academia, creating and chairing a Master of Science program in real estate development at a graduate school of business in Florida.

In 2010, he returned to his first love, writing, and began creating his Sleeping Dogs series of thrillers involving international espionage and geopolitical intrigue. His debut novel, Sleeping Dogs: The Awakening, reached international bestseller status. He followed it with Endangered Species, Year of the Dog, Dogs of War, A Deadlier Breed, and The Devil’s Litter. A Deadlier Breed won the Whammy Award at the 2019 Southwest Florida Writers Conference for the “single most impactful writing” as determined by the literary agents and editors in attendance. The sixth book in the series, The Devil’s Litter, is a prequel to the other five. His latest thriller, THE TAXMAN COMETH, was published in December 2020. It is a standalone and not affiliated with the Sleeping Dogs series. He has started his ninth novel, the seventh in the Sleeping Dogs series.

The Adventure of the Deceased Scholar by Liese Sherwood-Fabre