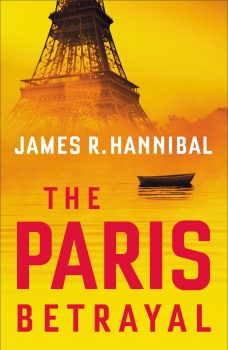 After a rough mission in Rome involving the discovery of a devastating bioweapon, Company spy Ben Calix returns to Paris to find his perfectly ordered world has collapsed. A sniper attack. An ambush. A call for help that brings French SWAT forces down on his head. Ben is out. This is a severance—reserved for incompetents and traitors.

Searching for answers and anticipating a coming attack, Ben and a woman swept up in his misfortunes must travel across Europe to find the sniper who tried to kill him, the medic who saved his life, the schoolmaster who trained him, and an upstart hacker from his former team. More than that, Ben must come to grips with his own insignificance as the Company’s plan to stop Leviathan from unleashing the bioweapon at any cost moves forward without him—and he struggles against the infection that is swiftly claiming territory within his own body.

For starters, I hope readers are entertained, and that they set the book down hoping to see more action from Ben Calix soon. Giving them a few moments to enjoy a different world is my job. But on the deeper level, this book is an allegorical examination of our place in the world—both the smallness of a single life and the goodness of the one who set it in motion. I hope my readers come away with the feeling that no matter how bad life gets, someone out there has their back.

I poured a lot of my own experience into this story—advice from mentors and lessons learned in a unique military and intelligence career. I want readers to be entertained, but I want them to learn something about operational culture and the thought processes of an isolated field operative.

The go-to research document for this story was the biblical book of Job, the story of a man who suffered greatly but responded to a perceived betrayal with undying loyalty. Dr. Gary Huckabay, a theologian and seminary professor, helped me in this research and took me on a deep dive into Job’s story and thought process. He introduced me to themes and nuances in the book that I had never seen before. Dr. Huckabay changed my perspective of Job’s friends, his wife, and Job himself, helping me slip traces of Job and his friends into THE PARIS BETRAYAL.

No spoilers, but what can you tell us about the book that we won’t find in the jacket copy or the PR material?

THE PARIS BETRAYAL is more than a spy story. It’s almost a primer on field operations with a focus on what to do when it all goes wrong. Ben Calix will face some pretty dark hours. He’ll lean on his training and on the few people he can trust, and he’ll explain a lot of what he’s thinking to the reader along the way.

There are so many. Tom Clancy, Robert Ludlum, Clive Cussler, and C.S. Lewis all influenced me at an early age, creating the foundation of what I would come to understand as good storytelling. Beyond those, DiAnn Mills, Steven James, and Larry Brooks—who all have very different approaches to putting a story together—have influenced my style and creative process. I owe a great deal to Steven and DiAnn in particular. Both have spent more time with me than I deserve to help me hone my craft.

James R. Hannibal is no stranger to secrets and adventure. This former stealth pilot from Houston, Texas, has been shot at, locked up with surface-to-air missiles, and chased down a winding German road by an armed terrorist. He is a two-time Silver Falchion Award winner for his children’s mysteries, a former Thriller Award nominee, and a 2020 Selah and Carol Award finalist for The Gryphon Heist—the opener for the CIA series that now includes Chasing the White Lion. James is a rare multisense synesthete, meaning all of his senses intersect. He sees and feels sounds and smells, and hears flashes of light. If he tells you the chocolate cake you offered smells blue and sticky, take it as a compliment.