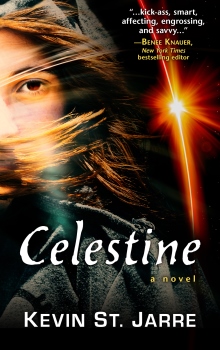 In 1984, 15-year-old Celestine Tolland and her parents were part of a crew of explorers who set off into space. Months after their departure, a virus ravaged the crew of the Phaeacia, killing nearly everyone aboard. The few survivors finally returned to Earth after nearly two years. However, because they were traveling near the speed of light—causing an effect known as time dilation—more than 30 years have passed on Earth. Celestine, who had finished her freshman year in high school in 1984, returns to Earth to begin her senior year in 2022. She is only 17, while her former classmates are nearly 50 years old.

Back in her hometown, Celestine faces the same trials that every teen girl faces, but there are many new challenges. In addition to making friends, finding romance, and dealing with mean girls, she has to learn how to navigate social media and the Internet, and to avoid suspicious members of the public who fear she is contagious. She also has to deal with survivor’s guilt, living with her foster mother (who also happens to be her childhood friend), therapy, fear of a government conspiracy, and fear of falling ill.

Getting into the head of a young woman, and keeping that voice authentic, which presented the biggest opportunity to work on empathy with that character. 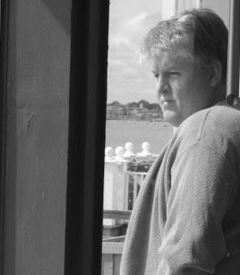 While it involves government conspiracy, medical mystery, and psychological thrills, it does so from the POV of a young woman. She isn’t the prize, or the victim to be rescued; she is the protagonist.

See the previous, and to include that the protagonist is not indomitable.

There’s a deep dive here into how people think and relate to others in everyday life, woven into a psychological thriller.

Kent Anderson, Katherine Neville, many others. Both Kent (Sympathy for the Devil) and Katherine (The Eight) have a tremendous ear for dialogue and are terrific at pacing. The characters behave in believable ways, and are incredibly well fleshed-out.

What would you want readers to come away with, to learn from CELESTINE?

In addition to whatever else they might take from reading this novel, I’d like people to learn that in the end, we either rescue ourselves, or we remain lost.

Kevin St. Jarre earned his MFA in Creative Writing from the University of Southern Maine’s Stonecoast program. He has worked as a teacher, a professor, a newspaper reporter, and an international corporate consultant, and led a combat intelligence team in the first Gulf War. He penned a series of original action thrillers for Berkley Books. He’s an essayist, and his Pushcart-nominated short fiction has appeared in journals such as Story and Solstice Literary Magazine. He lives on the coast of Maine but grew up in its northernmost town, Madawaska.