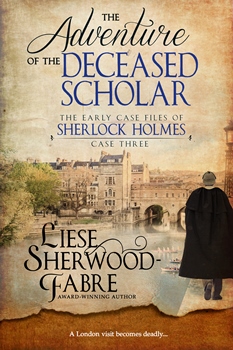 The Holmes family plans to celebrate the Easter holidays in London until a tragedy during the 1868 Oxford-Cambridge Boat Race puts Mycroft Holmes’s reputation on the line.

When Mycroft Holmes identifies a drowning victim, he is drawn into a situation that could destroy not only Lord Surminster’s name, but his own reputation as well. If ruled a suicide, the lord’s assets will be returned to the Crown, leaving his mother and siblings destitute. Should that happen, the victim’s sister has threatened to drag Mycroft’s good name through the mire. Sherlock must determine what happened before more than one family is destroyed.

Liese Sherwood-Fabre recently spent some time with The Big Thrill discussing her latest thriller, THE ADVENTURE OF THE DECEASED SCHOLAR:

As Sherlock navigates through London society, he is introduced to new aspects of social class—from the street urchins to the nobility. His later ability to pass himself off as a sailor, priest, or maid’s suitor had to be developed. Victorian London displayed all the social levels, and this book provides readers with an introduction to the differences among them.

Getting the historical aspects correct required a lot of research into the Victorian judicial system as well as social norms for those of different classes. I now have quite a bit of trivia related to inheritance, trusts, and the Victorian legal system stored away.

While the backdrop had to be accurate from an historical perspective, the actual characters allowed me to apply my own imagination. Although Sherlock and Mycroft Holmes are well-known to readers, not at these ages. Getting to provide an explanation of how these young men developed into the older characters offers an opportunity to “tinker” with his psyche.

The legal system related to inheritance and trusts was very complex in the Victorian era—to the great profit of some attorneys. The judicial proceedings regarding wills and probate were overseen by ecclesiastical courts. When wills were contested, the adjudication could take years, sometimes depleting whatever would have been inherited. During judicial reforms under Queen Victoria, these were passed to the secular courts. An argument against such change was that the court was more just and sympathetic to all involved, rather than simply applying the letter of the law.

Liese Sherwood-Fabre knew she was destined to write when she got an A+ in the second grade for her story about Dick, Jane, and Sally’s ruined picnic. After obtaining her PhD from Indiana University, she joined the federal government and had the opportunity to work and live internationally for more than 15 years. After returning to the States, she seriously pursued her writing career and has recently turned to a childhood passion in the tales of Sherlock Holmes. A recognized Sherlockian scholar, her essays on Sherlock and Victorian England are published across the globe and have appeared in the Baker Street Journal, the premiere publication of the Baker Street Irregulars as well as The Canadian Holmes.