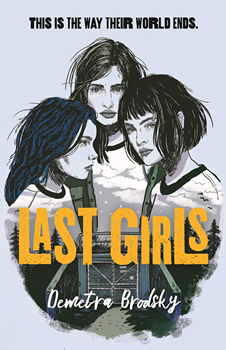 The story centers on three sisters—Honey, Birdie, and Blue—who live on a secret compound in the Washington wilderness where they are preparing for the end of the world. Or at least, a vastly different world. Their education doesn’t come in the form of textbooks—they’re learning to hunt, homestead, and ultimately survive.

But when danger strikes and their training is put to the ultimate test, the sisters realize that they aren’t quite prepared for any situation. And the one place they thought was safe might not be safe after all.

In this interview with The Big Thrill, Brodsky shares the inspiration behind the story and her characters, as well as what she hopes readers will take away from her taut, thought-provoking thriller.

I love that this is a “sibling” story—they’re often underrepresented in YA. The Juniper sisters definitely fill that void. I’d love to hear about the inspiration for this trio.

I’m so glad to hear the sibling aspect of the story resonated with you. The idea of writing a story about sisters was born in me a long time ago, and I’m thrilled that I could put three sisters on the page. I’m one of three sisters. The youngest one of three sisters, so I identify strongly with Blue, who they claim is the weirdest of the weirds. It was a moniker applied to me by my sisters, as siblings are known to tease one another, but the truth is I was always the artsy, creative one, the black sheep, and my siblings were not shy about letting me know.

My mother is also the middle of three sisters, and that trio repeating with us always intrigued me. My mother is the middle sister and as fearless as Birdie. She was also a sickly child growing up in Greece and frail, so Birdie, in a name, is a nod to that even though my Birdie is a strong firecracker. My oldest sister was often saddled with the responsibility of watching us because my parents, being immigrants, worked nights and overnight shifts in factories when we were younger. It wasn’t until I was older that I understood how much they put on her when she was perhaps a bit too young to take on those responsibilities. And so, like Honey, my older sister had to be responsible, reactive,  and ready for anything.

The sisters don’t live in your typical suburban neighborhood, and their education is far different than what one might expect in a YA. What was the nugget of information or inspiration for this awesome conceit?

Several factors came into play when I was deciding how to handle the Juniper sisters’ homelife and education. I easily could have made them homeschooled, but it would have been a bit too easy to go that route, and I wanted someone outside their coalition to help them see the truth about their lives.

I also lived for several years in upstate New York and had friends who kept chickens and goats and lived on acres of land, making their own cheese and soap. I wanted to honor both kinds of upbringing and stress that the Juniper sisters were outsiders amongst their peers, hopefully emphasizing that not all teens grow up in suburban neighborhoods, nor do they live what we think of as typical lives. Another aspect came from watching Doomsday Preppers. I found the show to be more than a little performative, and I started snooping around forums and homesteading sites to get a more realistic picture of the prepper community. I stitched all of those things into my own representation of the Burrow and the Nest in LAST GIRLS.

My husband and I are watching Alone, a TV series that basically drops contestants in the middle of nowhere and challenges them to survive. My husband is an outdoorsman through and through and would have no problem eating squirrel…whereas I might be willing to starve to death. Where do you fall on that scale? What kind of research was required to write this book?

I’ve seen a couple of episodes of Alone, and your take on it made me laugh out loud. The truth is, I would eat a squirrel or rabbit or catch some fish. I bet most people would be surprised by what they’d be willing to eat to survive. The beginning of the pandemic revealed that pretty clearly as everyone scrambled to stockpile food and toilet paper. Then came the big push toward urban and suburban gardening. People staying home for safety, and in consideration of others, they started baking bread, so much so that there was a shortage of yeast and flour. Many people, many of my friends in fact, adapted quickly by making their own sourdough starters, sharing them with others. It was awe-inspiring to see the lengths some people would go to reclaim homesteading skills that were sort of lost to us due to modern conveniences. On the flip side of that, we also saw the lengths people would refuse to go, as well. I have always loved camping and hiking and being in nature, but I’m also fond of a soft quilt and gas fireplace and a premade nutrition bar. In the end, I would do whatever I had to in order to survive.

I am a self-proclaimed research enthusiast. Honestly, if I could monetize this skill set I would do it in a flash. LAST GIRLS required a ton of research, truth be told. But that’s always part of my process for all my books. I need to fill my head up with everything there is to know about my story world before I can begin, even if only a fraction of it ends up in the book.

The following things are a sampling of everything I researched before writing LAST Girls: The current political climate and how it brought the threat of the end of the world as we know it, the beauty of the Pacific Northwest, falconry and the sport of hawking, archery, ballistics, wounds and wound care, prepper slang, booby traps, bunkers, tinctures and poisons, group dynamics, survivalism, kidnapping, US military terminology and slang, high school and advanced chemistry, rattlesnake venom usage, Devil’s Breath (a Colombian mind-control drug), homesteading and animal husbandry, pigpen cipher, psychiatric experimentation performed by universities on students, the arts (primarily painting, embroidery, and comics, though I have a B.F.A so this was fun and easy), street art techniques, family dynamics and the psychology of birth order, and last but not least, Operation Paperclip: a covert affair where roughly 1,600 German scientists were brought to the US to work on America’s behalf during the Cold War.

Wow! That’s impressive. Was there anything that surprised you in your research?

I love history, and it was surprising to me to learn that in a covert operation, German (Nazi) scientists (and their families) were brought to the US under an intelligence objective meant to harness German intellectual resources to help develop rockets and biological and chemical weapons to ensure information didn’t fall into Soviet hands. That was not something covered in history in school. That surprise helped me fully form Dieter Ackerman as one of my villains.

There are several themes woven into the book, perhaps most poignantly, the concept of “hope.” What do you “hope” readers take away from this book, aside from an entertaining read?

In LAST GIRLS, Honey Juniper says that she hopes the arts remain part of our culture, even after the end of the world. I hope that sentiment resonates with readers and we continue to revere and protect the arts at all cost.

In the past few years, it feels like YA thriller is really picking up steam. What attracts you to the genre? What books in the genre have inspired you?

Reading a great thriller is like riding a roller coaster. There is something so electrifying about suspense and the anticipation of what’s to come. The amount of attention and retention it takes to hold onto the clues an author leaves while trying to puzzle out the solution is more active than in other genres. I think that makes the contract between writer and reader more intense. Some of my favorite thriller books are Sharp Objects by Gillian Flynn, In the Woods by Tana French, The End of Everything by Megan Abbott, That Weekend by Kara Thomas, The Lies They Tell by Gillian French, and We Were Liars by E. Lockhart. All books with dark family secrets, which I love to write.

Your debut, Dive Smack, garnered a lot of attention. Did you feel pressured with your second book? How did you get over what several writers call the second-book slump?

I did feel pressured, but I was never in a slump because I only had 12 weeks to write LAST GIRLS. I had given my editor at the time a book I was convinced she would love, but it didn’t go that way. I ended up giving her 13 pitches and she chose the one idea I had that was my least developed story. The Juniper Sisters is what LAST GIRLS was originally titled. I had to start completely from scratch on something we all affectionately call the “paper napkin idea.” Or in this case, it was more of a “Sticky Note idea.” I didn’t have enough time to get stuck or feel like I was in a slump because I was contractually obligated to get it done. It was sort of a blessing, because it helped me write faster.

No spoilers, but what can you tell us about your book that we won’t find in a press pack or on the jacket blurb?

I love this question because I want everyone to know that there is a second POV in LAST GIRLS. A very important, wonderful POV of a character that is so instrumental to the Juniper sisters’ journey that I wish he had a book all his own.

I currently have a speculative thriller out on submission, and I’m in the process of writing another thriller that is set in a very bookish world.

Demetra Brodsky loves to write twisty thrillers about dark family secrets. She is an award-winning graphic designer and art director turned full-time author. A first-generation Greek American and native of Massachusetts with a B.F.A from the Massachusetts College of Art and Design, Demetra now lives in Southern California, where she’s always exploring and researching, hunting for clues to things that might feed into her next book. Dive Smack, her debut novel, is a 2018 Junior Library Guild Selection and (ALAN) pick.

How to Write a Mystery: A Handbook from Mystery Writers of America