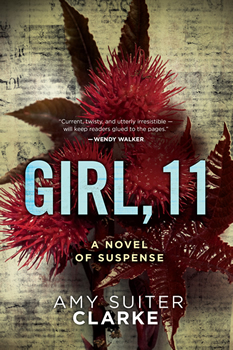 In her latest season, she’s going after the Countdown Killer, a madman who terrorized the community 20 years ago, kidnapping and ritualistically murdering three girls over seven days, each a year younger than the last. But after he took his 11-year-old victim, the pattern—and the murders—abruptly stopped. When Elle follows up on a listener tip only to discover the man’s dead body, she feels at fault. Then, within days, a child is abducted—a young girl who seems to fit suspiciously into the TCK sequence. While media and law enforcement long ago concluded that TCK was dead, Elle has never believed it. She had hoped her investigation would lay that suspicion to rest, but instead, her podcast seems to be creating new victims.

Clarke deftly balances the narrative in traditional prose and the language of a podcast.

“I love using nontraditional forms of writing in my novels to reveal plot and character in interesting ways,” she says. “Since part of the novel centers on a 20-year-old case, using podcast transcripts allowed me to explore what life was like in this community under attack by a serial killer without resorting to flashbacks of backstory. Instead, I could use interviews and brief monologues to get this part of the story across.

“Of course,” she adds, “I still had to balance this with the contemporary narrative. While the novel is about hunting the Countdown Killer, I didn’t want the focus to be solely on him. It’s much more about Elle’s journey and growth as both an amateur investigator and a person throughout the book. I’m eternally grateful for the writing program Scrivener, which lets you break up your work into scenes that can be viewed easily in a sidebar. I color-coded the scenes based on whether they were the prose narrative or the podcast, so this helped me make sure I was going back and forth between the two often enough that both still felt fresh.”

About midway through GIRL, 11, Clarke switches to another point of view and time. Was that in the outline or more of an organic development?

“A lot of thought went into when and where I would make that shift,” Clarke says. “Earlier drafts of the novel had it happen sooner, almost from the beginning. Even though most of the main plot was roughly outlined, those chapters weren’t part of the original plan. They came to me as I was writing and stayed throughout multiple drafts of the book. I knew it would be controversial, but I felt it was essential to have that perspective in there. Eventually, I got notes from my agent that led me to push that switch to later in the book, so I wasn’t giving away too much too quickly. Again, I wanted to avoid having scenes where characters had to enlighten the reader as to their actions and motivations by just stating them outright. I would much rather tell their story in a narrative format, which is why I wrote this perspective into the book instead of doing a quick denouement explaining everything at the end.”

A cold case is the original motivation for Elle’s podcast, but then an active case is introduced, creating a “ticking clock” effect. Clarke talks about the importance of that literary device.

“In a thriller,” she says, “I think it’s essential. If there’s no reason for the main character to jump outside their comfort zone and pursue the resolution of a case, why don’t they just stay in bed or go to brunch with friends? They have to have a reason not just to get up and chase after something, but a reason to do it now. I always look for this as a reader of crime and thriller novels. I think it’s possible to write a great book without that urgency, but it’s really hard. Most of the books I read that lack it are a letdown.

“Elle starts out with a strong motivation to pursue the Countdown Killer, but it only gets more potent and urgent as the book goes on. Just by the nature of his name, Countdown, there’s a ticking clock involved. We know he’s working toward something, and the question is whether Elle can stop him before he gets there.”

Clarke clearly did a lot of research for the book. But how did she know when enough was enough? And where did all these experts come from?

“I researched the book throughout the time I was writing it,” she says. “So I really only stopped when the book was finished. There comes a time where you have to say the book is done as best as you can do it, but it was definitely hard. I would hate to be wrong about something, even though I suppose I could claim creative license. I read several books, but I also listened to a ton of true crime podcasts, which not only helped with the podcast transcript development but a lot of the information on DNA and forensic psychology that was included. Seriously, there is so much incredible information available for free through podcasts!

“Many of the experts in the book,” she says, “were based on real people I’ve read or listened to in various media over the years. I work in a university, so I was lucky enough to have a contact in forensic DNA analysis who could help with some of the more technical terms and capabilities of that science. Through my agency, I also got in touch with a forensic toxicologist who helped ensure that I got the effects of castor bean poisoning right. There was a lot of writing things in early drafts and editing them later with the help of experts to make sure it sounded legit.”

Toward the end of the story, Elle says, “I have had to learn what to do when a chapter ends before I know how the next one will start.” Is this part of Clarke’s real-life writing process?

“Absolutely!” she says. “I have become more of an outliner than not, but there are still times when I’m writing where I have absolutely no clue what the next chapter is going to be about. Sometimes, I just get on with it and start writing something—anything—even if I don’t know where I’m going. Other times, I leave it for a day or two and mull over where I left off, hoping inspiration will hit me. This is also true of whole books. I have finished a draft of my second book, but I still haven’t been struck with an idea for the third. I think a lot of writing is just faith, trust in the process. Ideas have always come to me before, so I know they will again, whether that’s for the next scene or the next book.”

On a personal note, Clarke dedicated GIRL, 11 to her parents. How did they influence her writing and desire to be a storyteller?

“Many creative types are not supported by their families,” she says, “so I feel incredibly blessed that this was not my experience. My parents have always been excited about my writing, and my mom in particular has read almost everything I’ve written since I learned to spell. My dad is also a creative person and an incredibly engaging speaker, so I got some of my love for words from him too. They have both been a constant encouragement for me over the years, and this book truly wouldn’t have happened without them.”

Amy Suiter Clarke is a writer and communications specialist. Originally from a small town in Minnesota, she completed an undergraduate in theater in the Twin Cities. She then moved to London and earned an MFA in Creative Writing with Publishing at Kingston University. She currently works for a university library in Melbourne, Australia. GIRL, 11 is her debut novel and will be published by Houghton Mifflin Harcourt in the USA, Text Publishing in Australia, and other publishing houses all over the world in 2021.