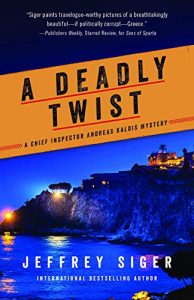 Crime reporter Nikoletta Elia is sent to the Greek island of Naxos to cover the conflict between traditionalists and those who want to build tourism on the island. But the story that draws national attention is one that falls in her lap when a man claims to be a successful hacker paid to use his computer skills to cause fatal “accidents.” Then Nikoletta disappears, and her editor panics, calling on Chief Inspector Andreas Kaldis, head of Greece’s Special Crimes Unit, to find her. He sends Detective Yianni Kouros to the island to work with the local police following in Nikoletta’s footsteps. When Yianni’s truck is forced off a dangerous mountain road, Kaldis assembles a savvy team to search for the reporter and the person who tried to kill his detective. While Kaldis is pressured to find the reporter or lose his job, someone is desperate to keep the past secret.

A DEADLY TWIST, being the 11th book in the series, my protagonist and supporting characters are generally set. But villains always emerge as the plot evolves through my not-an-outliner method of writing. All of which is my long-winded way of saying that setting always takes shape first, and the rest follows along.

Greek locales are fascinating, because there’s likely not a square centimeter of the country that hasn’t played some part in one of the epic dramas cloaking Greece in intrigue since the dawn of time. The biggest challenge was deciding on what to keep out of the book. The biggest opportunity, the plethora of material to include.

My books seem to have an uncanny knack for coming true. That’s why my former editor Barbara Peters has called me “Cassandra.” I wish I knew why that is, but it keeps happening, in one book after another. Perhaps I should start writing about the stock market?

The New York Times Book Review honored Jeffrey Siger’s work by designating Jeff as Greece’s thriller novelist of record, the Greek government’s General Secretariat of Media and Communications selected him as one of six authors—and the only American—writing mysteries that serve as a guide to Greece, and Library Journal named his ninth book in the series, An Aegean April, as one of the best books of 2018. He’s also received Barry and Left Coast Crime Best Novel award nominations.