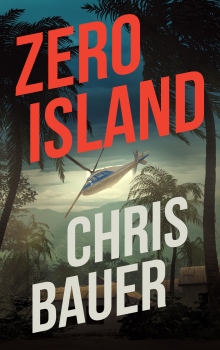 The Hawaiian mob isn’t dead; they moved to Philly. And now one of their own has fled.

Hawaiian mob fixer Kaipo Mawpaw is incognito somewhere in the South Pacific, and she wants to stay that way. A mobster wants her back and is willing to buy a small Hawaiian island that isn’t for sale to make it happen: Miakamii, Kaipo’s birthplace, where seashell jewelry made by the island’s indigenous people are worth small fortunes, where there might be a cure for dementia, and where its inhabitants have been sheltered from outsiders since the 1860s. But the island’s quiet, native citizenry is now under siege as bodies of current and former inhabitants start piling up. Philo Trout, retired Navy SEAL, current crime scene cleaning business owner and reluctant tourist, is about to get the vacation of a lifetime.

Plot. For me, always plot. It’s the second thriller in a series, so the characters are holdovers. In this one, however, setting was a close second because it was key to the plot.

Biggest challenge: the setting is Hawaii, and I’ve never been there. Biggest opportunity: Showing how rival mobster groups with gore-filled inclinations operate in the beautiful environs of Hawaii.

It’s a meat-and-potatoes, brute-force crime thriller, and the genre is lucky to have it, he says, tongue in cheek. It showcases violence and gore in a mysterious environment, plus it presents marginalized characters: Hawaiian natives, Yakuza mobsters, and certain Hawaiians indigenous to an island where time has stood still since the 1860s.

Nope. I have written two highly controversial thrillers, but this isn’t one of them. Jane’s Baby (Intrigue Publishing, 2018, showcased in The Big Thrill in 2018) was a political thriller dealing with an assault on the landmark Roe v Wade Supreme Court decision re: women’s reproductive rights. A second thriller with a WIP title America Is a Gun (currently on submission) deals with US gun control and lack thereof, plus it showcases a female bounty hunter with Tourette syndrome and a transgender ex-con (identifies as male) who is in the middle of righting a very severe wrong.

It’s a present-day novel, but it has as its origin point (backstory) the original Niihau Incident from WWII, where a Japanese pilot returning from the Pearl Harbor attack crash landed his Zero on nearby Hawaiian Island Niihau, an island the pilots were told was uninhabited, and he held the island’s inhabitants hostage for nearly a week before (spoiler, even though it’s a matter of record) the island’s natives killed him.

Why choose such an obscure book like Chance by Steve Shilstone, about a fictional baseball player, as the book that influenced me the most? A, because the voice of the narrator is the way I like narrators to sound, and B, because I love baseball books.

Chris wouldn’t trade his northeast Philly upbringing of street sports played on blacktop and concrete, fistfights, brick and stone row houses, and twelve years of well-intentioned Catholic school discipline for a Philadelphia minute (think New York minute but more fickle and less forgiving). Chris has had some lengthy stops as an adult in Michigan and Connecticut, and he thinks Pittsburgh is a great city even though some of his fictional characters do not. He still does most of his own stunts, and he once passed for Chip Douglas of My Three Sons TV fame on a Wildwood, NJ, boardwalk. He’s a member of International Thriller Writers, and his work has been recognized by the National Writers Association, the Writers Room of Bucks County (PA), and the Maryland Writers Association. He likes the pie more than the turkey.

A Deadly Twist by Jeffrey Siger