Dealing with Past Grief Key to Survival 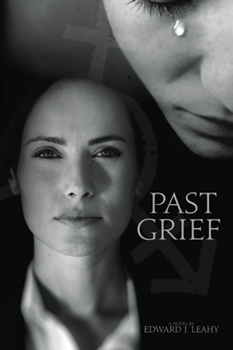 When a mass shooting in Manhattan’s Meatpacking District lures third-generation NYPD detective Kim Brady back from an extended leave following her father’s suicide, Brady must convince the crime’s primary eye witness to come forward if she wants to solve the case. There’s just one problem—Leanne is transgender and is afraid to come out.

Turns out, Leanne has good reason to be. Someone within the NYPD is tampering with evidence, threatening witnesses, stalking Leanne—and that’s just the beginning of the corruption within the police department.

When Brady realizes that one of her peers is actually responsible for the shooting, she must confront her complicated feelings about her father and learn from his lessons if she wants to not only solve the case—but also keep her and her witness alive.

In this interview with The Big Thrill, Ed J. Leahy provides insight into the research that went into the characters and story of his nail-biting debut, PAST GRIEF. 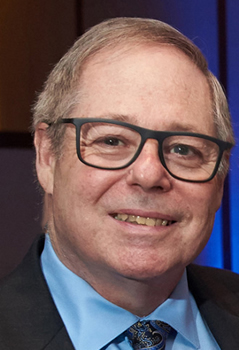 Kim Brady is a complex character, and when she returns to the NYPD, it’s after her father’s suicide. What can you share about the development of her character—was she inspired by someone you know or a specific event?

When I started this project, my goal was to create a character who had to deal with a reluctant witness while unable to resort to the kinds of ham-handed police tactics we often see on police shows. Leanne’s character emerged a moment later, and I knew that having had a transgender friend in childhood would have meant Kim’s reactions were visceral. Her empathy had to be underlined by a prior conflict involving her childhood friend, hence the conflicted feelings about her dad. The more I filled in the gaps in the story, the more Kim’s character emerged; the more I filled in gaps in her character, the clearer the story became. Some of her experiences were inspired by those of my stepdad, who was a police sergeant.

Another complex character is Leanne, the witness. It’s understandable as to why she’d want to remain anonymous. What was your experience like writing this transgender character?

I read several autobiographies by transgender women, the most helpful of which was Janet Mock’s Redefining Realness. A lot of the trauma Leanne has experienced sprang from Mock’s book. For me, the research helped me to understand, in very human terms, the anguish transgender people experience. It also helped that a doctor my son and daughter both see is transgender (and in fact she underwent transition while I was writing the novel). 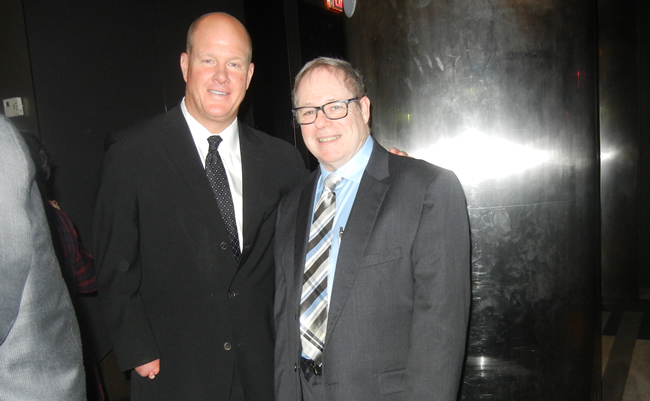 In classic thriller style, PAST GRIEF ramps up in tension—and by the book’s climax, the pressure on Kim reaches a page-turning peak. Are you a plotter or a pantser? What are some tips you would give to aspiring writers about building tension on the page?

I’m a “plantser.” I begin with a firm sense of where my story begins, a firm idea of how I want it to end, and the barest outline of how I’m going to get there. Then I start writing. For me, the first draft is me telling myself the story. Once that’s done, I go back and fill in gaps, fix plot holes, and, most of all, watch for passages that lose tension. At one point, I was querying agents and getting some requests for full manuscripts, but there the interest died. I knew something was wrong, but I couldn’t put my finger on what, so I signed up for MWA-NY’s Mentor Program. My mentor, after reading the draft, gave me the best advice I’d ever heard. Noting that Kim is a big basketball fan, he said, “You’re a basketball guy; think Russell Westbrook, always pushing, pushing, pushing. Forget walking the ball up the court and passing off.” I go with short chapters (often no more than one scene) and try to end with a threat or something that will have the reader asking themselves a question and turning the page to find the answer. I keep descriptions short and well spaced out, and I try to combine lines of dialogue with action or the character’s thoughts. There’s also something to be said for the old saw “When in doubt, have another body hit the floor.” 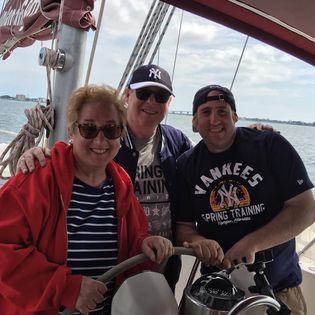 Leahy with his wife and son

Is PAST GRIEF your first thriller? What draws you to the genre?

PAST GRIEF is not only my first thriller, but my first published novel. I was drawn to the genre in part because of my wife, who is a huge fan of police dramas and anything on forensic investigations. I got hooked watching with her and started reading stories by authors like James Patterson, Tess Gerritsen, and Lisa Gardner. It’s a genre that thrives on flawed heroes and brilliant or driven villains, and that creates lots of opportunities for drama. I love that.

As a member of both ITW and MWA, what would you say to aspiring authors about the importance of joining organizations like this?

It is almost impossible for a newbie author to make it without assistance from established writers. And the writers in organizations like ITW and MWA not only contribute to conferences that offer valuable tips to aspiring authors, but also can be of great assistance when one is at the launch point of one’s writing career. 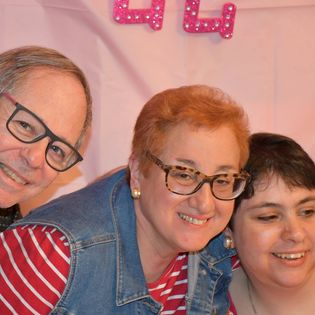 Leahy with his wife and daughter

Given that Kim Brady is with the NYPD, what kind of research did you need to do to create authenticity? Was there anything that surprised you during your research?

In researching the NYPD, my greatest concern was authenticity. The last thing I wanted was for someone to read the story and say, “No, no, that’s completely wrong!” I read a number of memoirs, including Ray Kelly’s (two-time police commissioner) and Charles Campisi’s (former chief of the department’s restructured Internal Affairs Bureau). Probably my biggest surprise in all of this was Campisi’s description of how it was members of the department who provided the information to solve the case of Abner Louima, and of the great utility the bureau had gotten from an anonymous tip line for use by members of the department to report misconduct of police officers. For more mundane details, I downloaded a copy of the department’s Patrol Guide and interviewed a lieutenant in the office of the Deputy Commissioner of Public Information (DCPI).

Can you share anything about what you’re working on next?

I have just submitted the manuscript for my second novel in the Kim Brady series to my publisher, Black Rose Writing. If they accept it, it should be out by the end of 2021.