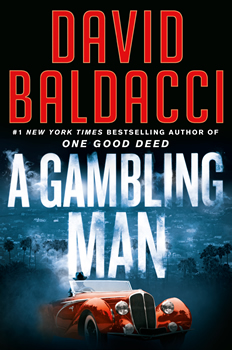 Pre-pandemic, back when book tours were the norm, New York Times bestselling author David Baldacci sat at a desk in his hotel one night and started writing about a character—a straight-talking former World War II soldier fresh out of prison for a crime he didn’t commit.

The story wasn’t meant to be a book—more like a novella, and probably a standalone. But, as is often the case for Baldacci, the writing didn’t stop…and Aloysius Archer refused to leave his mind. Before he knew it, another series was born.

The character came at a time when Baldacci, a renowned poster child for “truly loving what you do,” was experiencing a bit of a dip in his writing enthusiasm. Readers shouldn’t panic—a dip is not a crash. Promise.

But after 50 or so published books, many of them bestsellers, Baldacci needed something fresh to stoke those writing embers once again. Aloysius Archer provided a spark more akin to gasoline and set that passion ablaze. Readers: exhale.

“I’m only human,” Baldacci says, “and I still love writing. But every once in a while you need something to give you a jolt. The Archer series does that for me.”

It shows. Archer made an explosive debut in One Good Deed, earning Baldacci an ITW Best Hardcover award nomination, and garnered well-earned praise from critics and fans. In short, One Good Deed was one of the most talked about thrillers of the year.

People will be talking again with the release of A GAMBLING MAN. The year is 1949, and Archer is on his way to Bay Town to start a new job with a well-known gumshoe. He stops at a casino in Reno where he hooks up with aspiring actress Liberty Callahan. Together, they head west in a sweet ride—a Delahaye 135 Baldacci pegged as Archer’s car while at an auction with his father-in-law—to fulfill their dreams.

But this is a thriller, which means their journey—and subsequent time in California—is fraught with danger. Not surprising, though, Archer and Liberty prove more than capable of navigating those twists and turns. 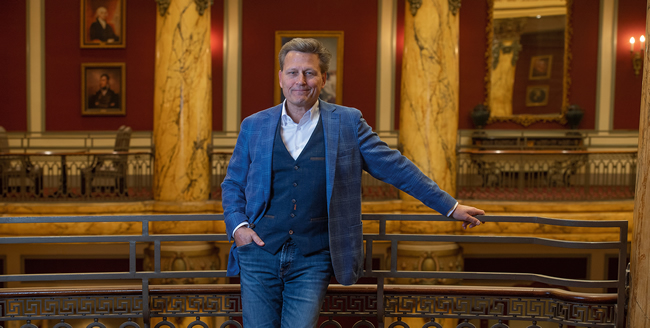 “I wanted to pair Archer on this odyssey with someone who was also going on their own odyssey,” Baldacci says. “I wanted someone bold, but also fragile and scared.”

“Back then, becoming an actress in Hollywood was an incredible gauntlet you had to run,” Baldacci adds. “Liberty is very strong in her own right, but she also has that fragility. This is her one shot. So I paired together two lonely souls. I didn’t want Archer to dominate. I wanted them to be equals, both in pursuit of their individual dreams.”

Baldacci aces this goal, infusing “hope” within the constraints of a textbook-perfect thriller, set in the past where truly, the pages come to life and give us an authentic portrait of 1940s post-war America.

Baldacci works hard to get those details right. His trick? A day in the life of Aloysius Archer.

“I consider everything he would do and who he would see throughout a day and think, What do I need to know? How would he shower, dress, travel from one place to another? What would he drink? Where would he eat and what? I consider every waking moment of an entire day,” Baldacci says. “And that generally identifies most of what you need to know to replicate a time period.”

Breaking it down this way makes the research less overwhelming for sure, but Baldacci has a binder full of notes on everything from what people wore to the kind of cigarettes they’d smoke.

“The process is simple enough that it feels like something I can execute,” he says. “It’s incredibly effective.”

Plus, it clears the way for the part of the process Baldacci enjoys most—putting words on the page. And he does so with the kind of output most writers only dream of. As usual, Baldacci wrote two books last year, and he’s already 120,000 words into the third Archer book…which he started January 2021.

“I’m pleasantly surprised at the output,” he says, ever humble about feats that leave most of us slack-jawed. “I was just racing through the story, because I’m so immersed in this world. I’m the most ahead of schedule I’ve ever been, and I think it’s because I’m just really loving this time period.”

But that doesn’t mean he isn’t excited to return to his contemporary work. Readers can breathe another sigh of relief that Baldacci has no plans to abandon other fan-favorite characters. The fourth Atlee Pine book—Mercy—is slated for release this year and will resolve that character’s storyline (and no, Pine isn’t going anywhere just yet), and another Amos Decker book will launch in 2022.

“It’s been 25 or 26 years, and I’ve never lost that obsessive compulsive need to write,” he says. “That motor just keeps churning. To be able to write a book and actually finish it, you need to fill your tank every day. Find something that you’re so juiced about, you can’t wait to get back to it. That passion will elevate every aspect of your novel. It’s critical—because below average just isn’t going to cut it.”