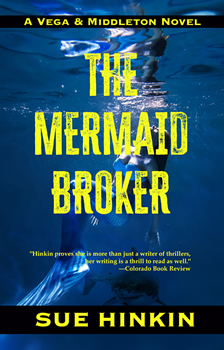 Fourth in the Vega and Middleton series, THE MERMAID BROKER by author Sue Hinkin is diabolical but also reassuring. There are immoral, malevolent people in the world—but there are also rational, tenacious individuals who are willing to risk everything to do what is right.

A biology teacher at Santa Monica High School, Isabelle Abbott has been abducted and finds herself imprisoned with other women in an underground house of horrors surrounded by vicious sea creatures. Unlike the rest of the captives, there are people on the outside that notice her absence.

When Bea Middleton, a reporter, is told by her boss to “come up with a new take to the human trafficking narrative,” she believes there are no new angles for her to write about on the despicable subject—until a friend tells her about something “weird” they found on a deep net dive. It still seems like an old story, until Bea learns of a new horrific twist. Using her talent as a reporter, she discovers a more deviant story of human trafficking than she had ever imagined—and this one could involve her son’s missing teacher.

When Bea teams up with Detective Wu to find answers to Isabelle Abbott’s disappearance, they quickly realize it will take both of their skill sets and contacts to locate the nefarious perpetrators before all the evidence is washed away.

In this interview with The Big Thrill, Hinkin provides insight into the series and her process.

THE MERMAID BROKER is your fourth book in the Vega and Middleton series. What do you find most difficult about writing a series? When you wrote the first book did you expect it would be the beginning of a series?

I wanted to do a series from the very beginning based on a partnership I had early on in the news business. I was hired as the first and only TV news camera woman at a Michigan station, likely because they had two FCC sex discrimination suits pending against them. There was one Black reporter, another woman, and we were often sent out on assignment together—the two outliers, as it were. So I pictured Bea Middleton and Lucy Vega, the journalist and her photog partner and friend, as my series protagonists.

My first three books are almost a trilogy rather than a typical series. Book #1 is pretty much Lucy’s story, Book #2 is Bea’s story, and Book #3 is where they come together to finally vanquish the antagonist introduced in the first novel. All the books after that, including THE MERMAID BROKER, will feature the women working crimes together. Having two Rizzoli and Isles-type protagonists is very challenging; trying to keep balance in their action and involvement can be daunting. If I knew then what I know now, I might have chosen to go with one heroine. 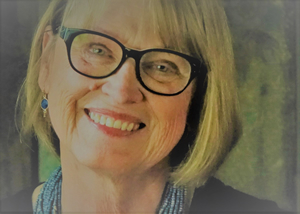 The knowledge you have of the ocean and its inhabitants appears extensive—loads of research or personal experience?

I grew up on the Great Lakes, where nothing lurks beneath the surface that can eat you. When I moved to Los Angeles to attend the American Film Institute, I lived near the beach and researched everything oceanic, both out of interest and self-preservation. I love the ocean and am endlessly fascinated by its ecosystem and wonderful creatures. As the great granddaughter of Dutch fishermen/women, I had to learn how to put a worm or minnow on a hook by the time I could walk. So, there may be a bit of genetics at play there, too.

The “world sex adventure tour” portrayed in your book seems just far-fetched enough to be an actual thing, and as we all know, truth can be stranger than fiction. Did you come up with the idea or rip it from the headlines?

I’ve never seen it in the headlines, but sex tourism is a multi-billion-dollar industry with millions of workers involved. It is most prevalent in third-world countries where poverty is rampant—Thailand, Indonesia, Brazil, the Dominican Republic, and the Philippines, to call out a few. This industry goes hand-in-hand with prostitution and sex trafficking. Western men and others, particularly rich men from repressed societies, seem to be the major clients for this kind of activity. With the advent of social media, sex tourism businesses are fast proliferating or should I say, metastasizing like cancer.

Combining the elements (kidnapping, sex tourism, and murder) is terrifying but creative, as well as logical. What led you to combine the three?

Sort of like “sex, drugs and rock ’n’ roll,” kidnapping, sex, and murder are a trifecta of terror, particularly for women.

Why did you choose gold as the color for a sea creature? You have what many might consider an unusual marine animal in your novel—is a similar one in actual development in a lab or did it arise strictly from your imagination?

It’s definitely a creature of my imagination. I chose gold because of its symbolism of wealth and greed. Gold has been at the heart of avarice since it was discovered.

“Snuff” videos have been talked about for years—are “snuff clubs” real?

Snuff—the extinguishing of a candle. Most films/videos are enactments, but the real thing is out there on gore sites and have been documented.

The dark web is home to some unusual items and services that are NOT illegal. What can you tell us about the dark web?

I’ve been trying to keep a handle on the dark web for years—it’s a slippery shapeshifter. You can buy anything—from organic produce to a chainsaw expert who will murder your wife. The Surface or Clear Web is what most of us use every day with Google, Firefox, Chrome and such. It’s a very small percentage (approx. four percent) of the whole online network. The Deep Web (90+ percent) includes medical records, company databases, and legal documents. The Dark Web (approx. five percent) is where TOR (the onion browser) brings you into illegal and at best, nefarious services and products—drugs, sex, supremacist groups, cults, fake documents, and a mind-boggling array of illicit depravity. Accessing the dark web can be dangerous. I’ve never been on it—not interested in taking the risk to my computer system or my person. I rely on a friend of mine who is a linguist and security expert for the military to answer my questions. He is represented as the Santa Monica war game developer character, Bijan Rachmaji, in my books.

I enjoy taking on social issues in my work. Coming in 2022 will be Dead Medicine (still not locked in title) based on the illicit generic drug industry.

Sue Hinkin is a former television news photographer, NBC-TV Art Department manager, as well as a college teacher and administrator. A graduate of the American Film Institute and long-time LA resident, she now lives in Littleton, Colorado. THE MERMAID BROKER is her 4th Vega and Middleton thriller.