Writing in the Dark 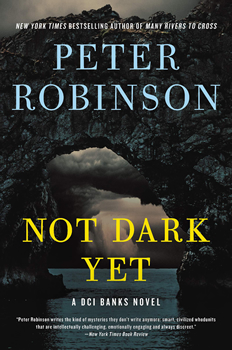 The latest entry in Peter Robinson’s popular, long-running Alan Banks series finds Detective Superintendent Alan Banks investigating the disappearance of his police-consultant friend Zelda, who’s been using her talents as a super-recognizer to help authorities find and prosecute sex traffickers. It’s a world with which Zelda is tragically familiar—orphaned as a small child, she was sold into the sex trade at the age of 17 and spent 10 years in captivity before escaping. Meanwhile, Banks and his colleagues DI Annie Cabbot and DC Gerry Masterson are trying to identify both the victim and attacker in a rape that was accidentally caught on video by cameras hidden in the home of a mob-connected property developer. The two plotlines intersect in ways that are both surprising and believable.

NOT DARK YET is the 27th book in the Alan Banks series and the third installment in the Zelda trilogy, picking up after 2018’s Careless Love and the following year’s Many Rivers to Cross. In his latest interview with The Big Thrill, Robinson discusses the challenges of writing the same character for more than three decades, the toll the pandemic has taken on his writing, and the worst writing advice he’s ever heard.

You typically divide your time between Toronto and North Yorkshire, where the Banks books are set. Is that time spent in England important to keeping the Banks series going?

Yes, it has become more important as time goes on. I usually begin a book—at least in my mind—with a body in a specific place. I invent many places when I write a novel, of course, but that first place is always real, and more often than not the result of a walk in the Yorkshire Dales with a friend who knows the terrain well. I haven’t been able to get back to Yorkshire since November 2019, so I find myself turning to my memory for the location of the next book’s body, but so far I haven’t come up with anything that grabs me.

To take that a bit further, how has the pandemic affected your writing routine?

To follow on from my previous answer, while the pandemic has cut me off (at least temporarily) from the source of my inspiration, it also seems to have made me curiously lethargic. The days follow one another in a kind of haze of TV series and movies. I still find great pleasure in music and books, but even they sometimes seem a bit of a chore when I can simply turn on the TV and watch another episode of Peaky Blinders or The Sinner. So I haven’t read War and Peace and Remembrance of Things Past, as I had hoped to do. The strange thing is that I find myself with plenty of ideas, but when it comes to giving them shape and form, expressing them in words, they seem to vanish into smoke. Is this the pandemic, I sometimes wonder, or am I just losing it?

Your books don’t shy away from topical issues; Many Rivers to Cross, for instance, included references to Brexit and a certain ex-president. Have you decided yet how you’ll handle the pandemic in future Banks installments?

I drew some nasty reviews on Amazon for negative comments on Brexit, though I don’t see how Zelda could feel any other way about it. But politics and culture have become so toxic these past four or five years that many people are reluctant to say anything at all for fear of online retaliation. I avoid Facebook, Twitter, and the rest of the antisocial media, but these people always find a way of getting to you. Basically, I’m not a very political person—at least I wasn’t until 2016!

As for the pandemic, I think a lot of writers have had the wind knocked out of them. I was lucky in that I was finishing off NOT DARK YET when it all began, and that book follows on directly from Many Rivers to Cross, set in summer 2019. The next Banks, when I find the right place for the body, will be set towards the end of 2019. After that, I just don’t know.

I certainly feel for those writers who were in the midst of books set in the “now” when daily life changed so drastically. And the aftermath will be with us for many years to come when the effects of the virus are diminished, or eradicated. I’m not sure how much I want to write a book in which everyone goes around wearing a facemask, the pubs and restaurants are closed, you can’t see friends and family, and you’re not supposed to travel far from home. It seems rather limiting. Of course, some enterprising souls will come up with plots that use lockdown as a device, but that will soon wear thin. And who would want to read a novel about these times right now, with the constant media bombardment going on? Sometimes I think if I see another picture of someone getting a vaccination, or Boris Johnson in a white lab coat or a high-vis jacket and yellow hard hat, I’ll scream. Maybe in the future I’ll write historical crime novels!

Twenty-seven books into the series, has writing about Banks gotten easier or more difficult?

It gets more difficult, partly because each book uses up a bit more. Perhaps another effect of this pandemic is that the usual methods of recharging—travel, friends, an evening at the pub, people-watching—are denied us. I’m not saying the books are based on personal experience, but they have to come from somewhere, and I really don’t want to repeat myself. Though I don’t believe that crime fiction is formulaic, it does have a certain basic structure, and each writer has his or her variation of that structure. You can play with it, shift things around, amplify one part more than another, but there are limits, as there are limits to the number of plots. Basically, a crime novel needs a crime. Ultimately, it’s only the writer’s own voice and take on things that makes a work original and effective.

I’d love to hear more about Zelda. How did you come up with a Modesty Blaise-loving super recognizer, and what compelled you to devote a trilogy to her?

I used to enjoy the Modesty Blaise books when I was younger—along with John Gardner’s Boysie Oakes and, of course, James Bond, Quiller, the Saint, and Len Deighton’s unnamed protagonist. There was also the incredibly camp and stylish Joseph Losey movie back then, too, with Monica Vitti as Modesty, Terence Stamp as Willie, and Dirk Bogarde as the villain. She seemed to be a glamorous and self-sufficient heroine, part criminal, part avenger, with a mysterious past spent wandering around the ruins of post-war Europe. Just the kind of heroine, in fact, that someone like Zelda, with her stolen youth and voracious appetite for fiction, might identify with.

I knew as soon as I introduced Zelda in Careless Love that her story would take more than one book to tell. Originally, she was simply supposed to help lead Banks and Annie to an old adversary who had escaped their grasp some years before, but she wouldn’t stop there. As soon as I started to delve into her past, I found enough mysteries and contradictions to keep her going for another two books.

You’re a master of plot twists and unexpected reveals. Are there any trade secrets you can share for crafting an effective twist?

I was thinking about that just the other day, for some reason, and I realized that the plot is the hardest part of a novel for me, and that what it really comes down to is an awful lot of hard work just thinking through sequences of events to their logical (and sometimes illogical) conclusions. I inevitably get lost in the labyrinth of who did what to whom, and why, and have no ball of string to mark my way out. I don’t work from an outline, so apart from a few scrappy notes, often scribbled in the dark while half-asleep, it’s all in my head, which sometimes feels fit to burst. But somehow, it usually seems to work out okay in the end, lord knows how. As the Grateful Dead sing, “If I knew the way, I would take you home.”

Is there any end in sight for the series?

There’s an end in sight for everything. The thing is, I don’t know when it will be. I hope I realize soon enough not to go on boring readers for too long, though some critics think I’ve done that already. I’m not sure I agree. At least, I haven’t bored myself yet, and that’s the only true criterion I can trust. One thing is for sure, and that’s that Banks will have to retire from his present position, but there’s no reason why he shouldn’t remain as a consultant on cold cases or high-profile murders. I’d also like to write the occasional standalone novel, and then there’s COVID to get around…..